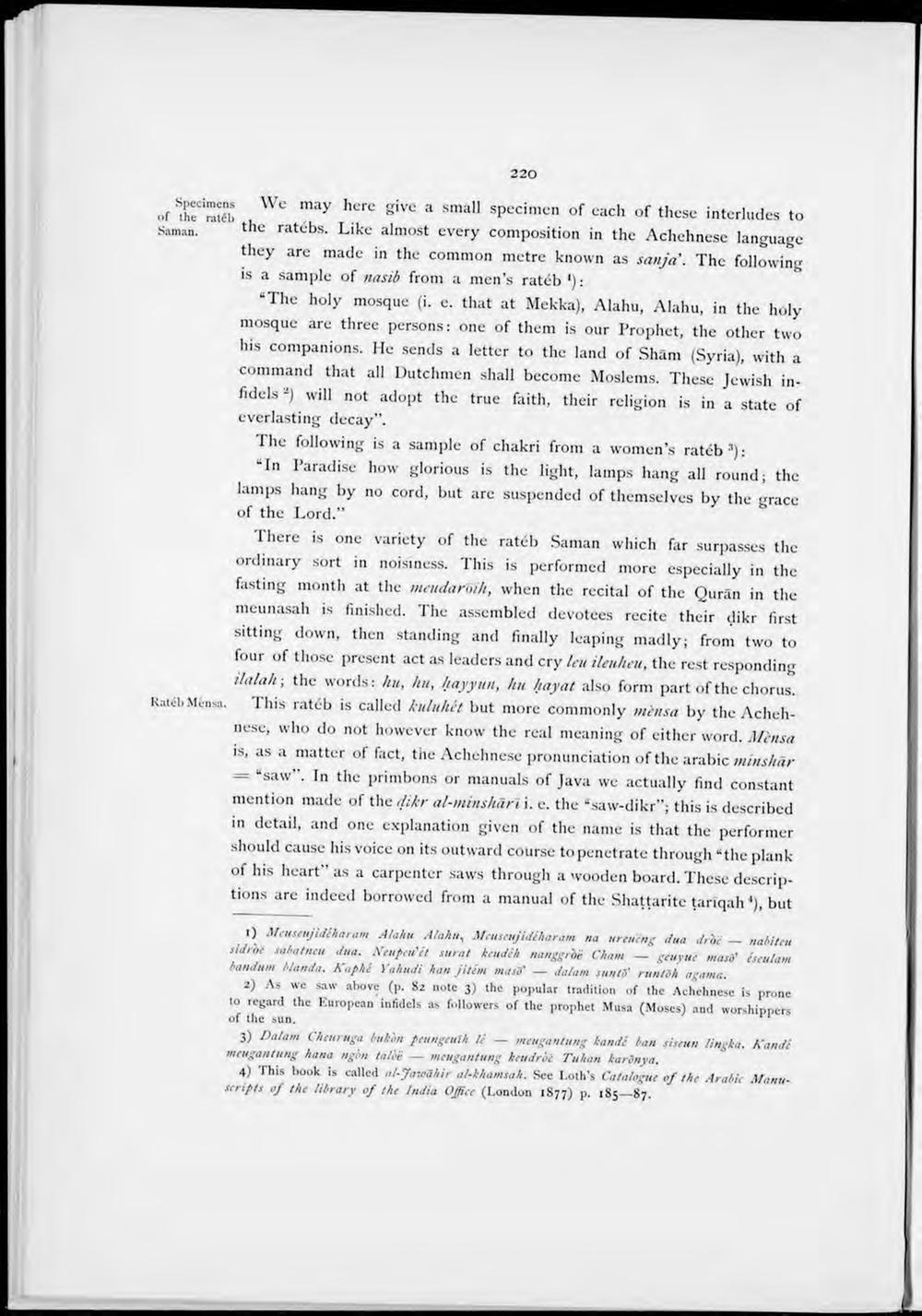 of rtTÏSb WC may here g'VC a Sma11 sPecimen °f each of these interludes to Saman. the ratebs. Like almost every composition in the Achehnese language

they are made in the common metre known as sanja'. The following is a sample of nasib from a men's ratéb '):

mosque are three persons: one of them is our Prophet, the other two

his companions. He sends a letter to the land of Sham (Syria), with a

command that all Dutchmen shall become Moslems. These Jewish in-

fidelsJ) will not adopt the true faith, their religion is in a state of everlasting decay".

The following is a sample of chakri from a women's ratéb'1): "In 1'aradise how glorious is the light, lamps hang all round; the lamps hang by no cord, but are suspended of themselves by the "racc of the Lord."

ihere is one variety of the ratéb Saman which far surpasses the ordinary sort in noisiness. This is performed more especially in the fasting month at the meudaröïh, when the recital of the Quran in the meunasah is finished. I he assembled devotees recite their dikr first sitting down, then standing and finally leaping madly; from two to four of those present act as leaders and cry leu ileuheu, the rest responding ilalah; the words: Au, hu, hayyun, hu hayat also form part of the chorus. Katéb Mensa. I his rateb is called kuluhét but more commonly mensa by the Achehnese, who do not however know the real meaning of either word. Mensa is, as a matter of fact, the Achehnese pronunciation of the arabic minshar = "saw". In the primbons or manuals of Java we actually find constant mention made of the dikr al-minshari i. e. the "saw-dikr"; this is described in detail, and one explanation given of the name is that the performer should cause his voice on its outward course topenetrate through "the plank of his heart" as a carpenter saws through a wooden board. These descriptions are indeed borrowed from a manual of the Shattarite tarïqah4), but

2) As we saw above (p. 82 note 3) the popular tradition of the Achehnese is prone to regard the European infidels as followers of the prophet Musa (Moses) and worshippers of the sun.