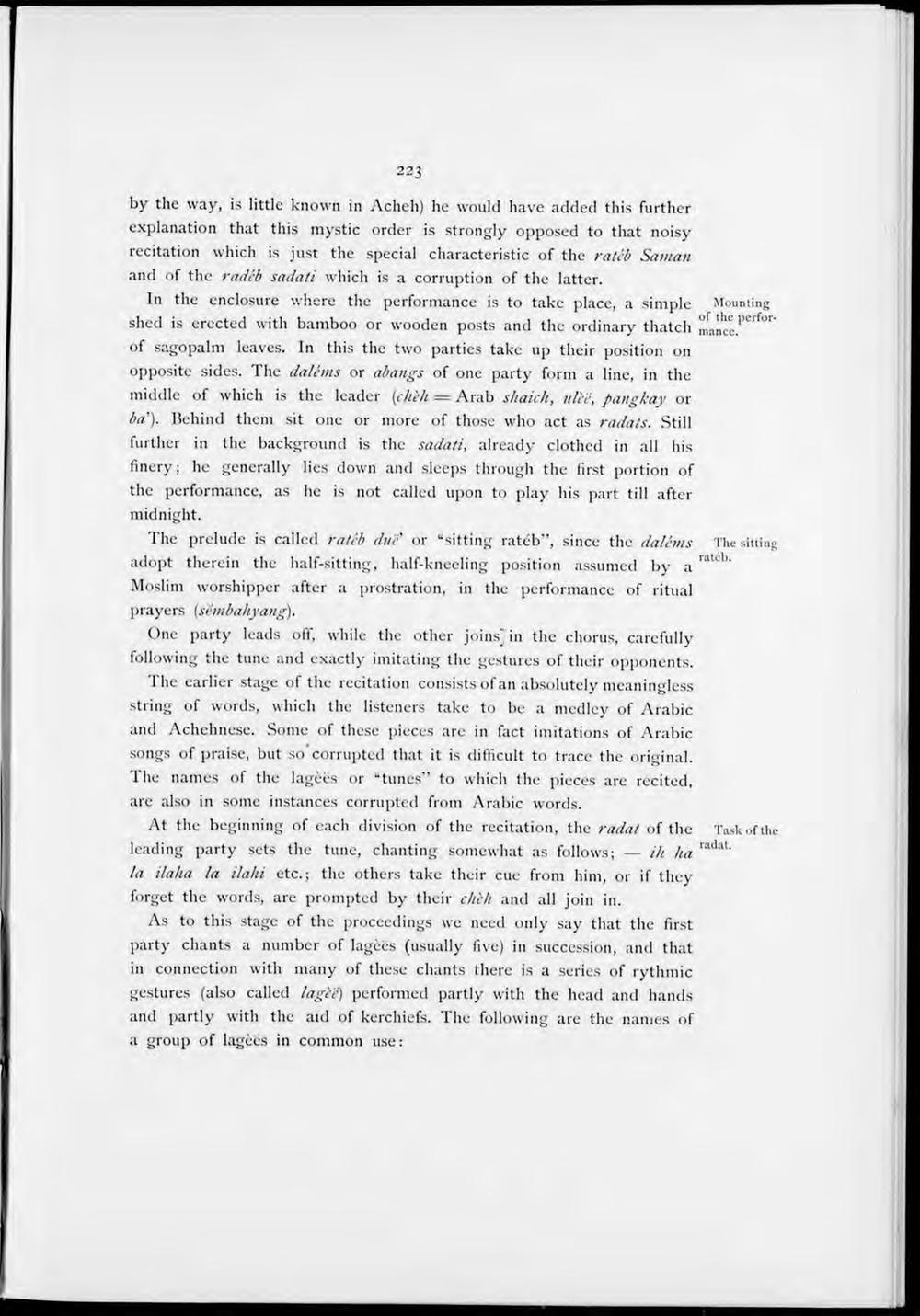 by the way, is little known in Acheh) hc would have added tliis furthcr explanation that this mystic order is strongly opposed to tliat noisy recitation which is just the special characteristic of the ratêb Saman and of the radèb sadati which is a corruption of the latter.

In the enclosure where the performance is to take place, a simple Mounting shed is erected with bamboo or wooden posts and the ordinary thatch mance.PC'f"r of sagopalm leaves. In this the two parties take up their position on opposite sides. The dalems or abangs of one party form a line, in the middle of which is the leader {chèh - Arab shaich, ulèë, pangkay or ba). Behind them sit one or more of those who act as radals. Still further in the background is the sadati, already clothed in all his finery; he generally lies down and sleeps through the first portion of the performance, as he is not called upon to play his part till after midnight.

The prelude is called ratél) diïe or "sitting rateb", since the dalems The sitting adopt therein the half-sitting, half-kneeling position assumed by a ratLl>' Moslim worshipper after a prostration, in the performance of ritual prayers (sembahyang).

One party leads off, while the other joins" in the chorus, carefully following the tune and exactly imitating the gestures of their opponents.

The earlier stage of the recitation consists of an absolutely meaningless string of words, which the listeners take to be a medley of Arabic and Achehnese. Some of these pieces are in fact imitations of Arabic songs of praise, but so corrupted that it is difficult to tracé the original. The names of the lagèës or "tunes" to which the pieces are recited,

are also in some instances corrupted from Arabic words.

At the beginning of each division of the recitation, the radat of the Taskofthe leading party sets the tune, chanting somewhat as follows; — ih ha radat' la ilaha la ilahi etc.; the others take their cue from him, or if they forget the words, are prompted by their chèh and all join in.

As to this stage of the proceedings we need only say that the first party chants a number of lagèës (usually five) in succession, and that in connection with many of these chants there is a series of rythmic gestures (also called lagèé) performed partly with the head and hands and partly with the aid of kerchiefs. The following are the names of a group of lagèës in common use: