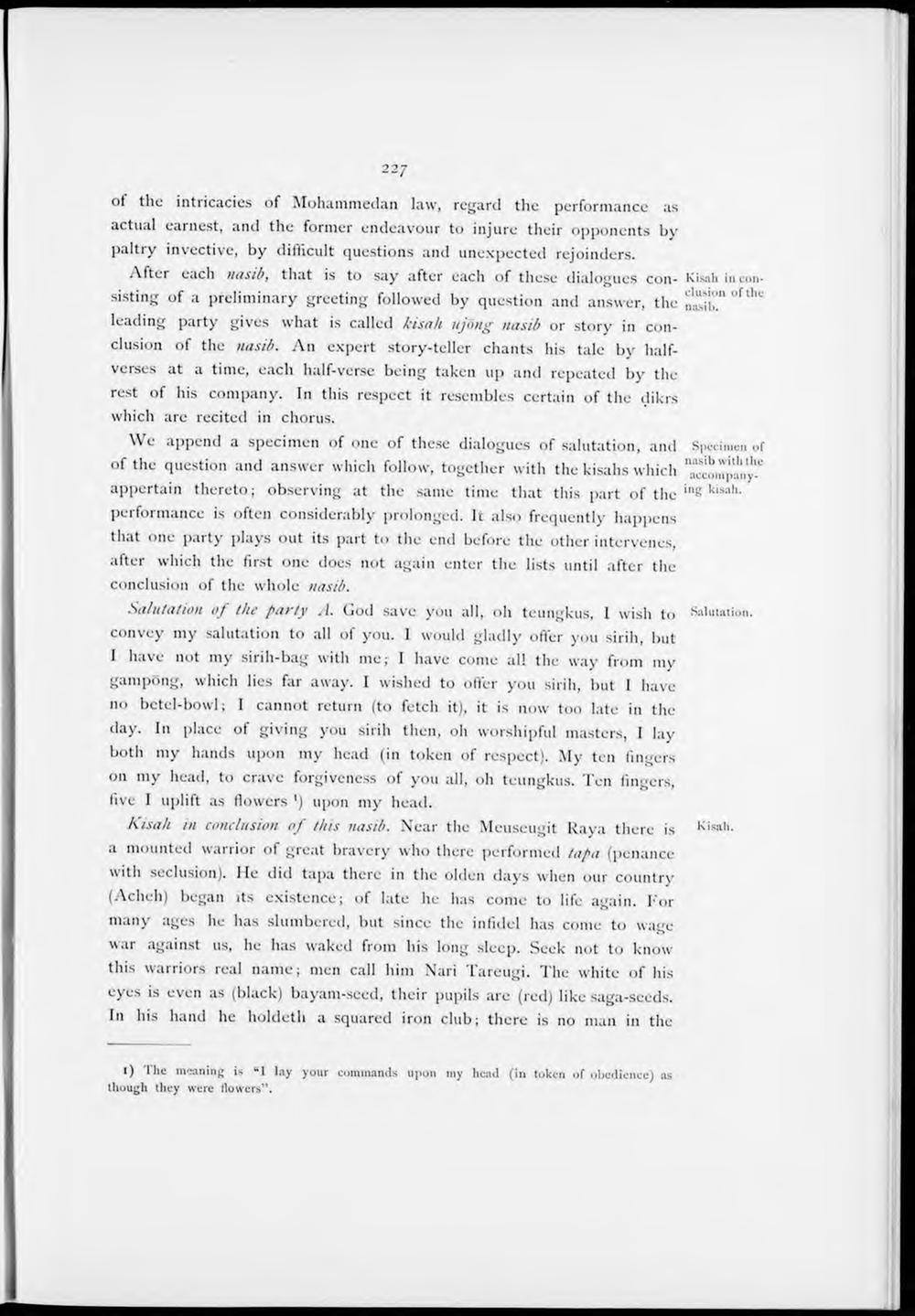 ot the intricacies of Mohammedan law, regard the performance as actual earnest, and the fornier endeavour to injure their opponents by paltry invective, by difficult questions and unexpected rejoinders.

After each nasib, that is to say after each of these dialogues con- Kisah in consisting of a preliminary greeting followed by question and answer, the „"sib" °f^ leading party gives wliat is called kisah ujong nasib or story in conclusion of the nasib. An expert story-teller chants his tale by halfverses at a time, each half-verse being taken up and repeated by the rest of his company. In this respect it resembles certain of the dikrs which are recited in chorus.

We append a specimen of one of these dialogues of salutation, and Specimen of of the question and answer which follow, together with the kisahs which appertain thereto; observing at the same time that this part of the ing kisah" performance is often considerably prolonged. It also frequently happens that one party plays out its part to the end before the other intervenen,

after which the first one does not again enter the lists until after the conclusion of the whole nasib.

110 betel-bowl; I cannot return (to fetch it), it is now too late in the day. In place of giving you sirih then, oh worshipful masters, I lay both my hands upon my head (in token of respect). My ten fingers 011 my head, to crave forgiveness of you all, oh teungkus. Ten fingers,

five I uplift as flowers ') upon my head.

Kisah in conclusion of this nasib. Near the Meuseugit Raya there is Kisaha mounted warrior of great bravery who there performed tapa (penance with seclusion). IIc did tapa there in the olden days when our country (Acheh) began its existence; of late he has come to life again. For many ages he has slumbered, but since the infidel has come to wage war against us, he has waked from his long sleep. Seek not to know this warriors real name; men call him Nari Tareugi. The white of his eyes is even as (black) bayam-seed, their pupils are (red) like saga-seeds.

111 his hand he holdetli a squared iron club; there is no man in the

1) The meaning is "I lay your commands upon my heail (in token of obedience) as though they were flowers".