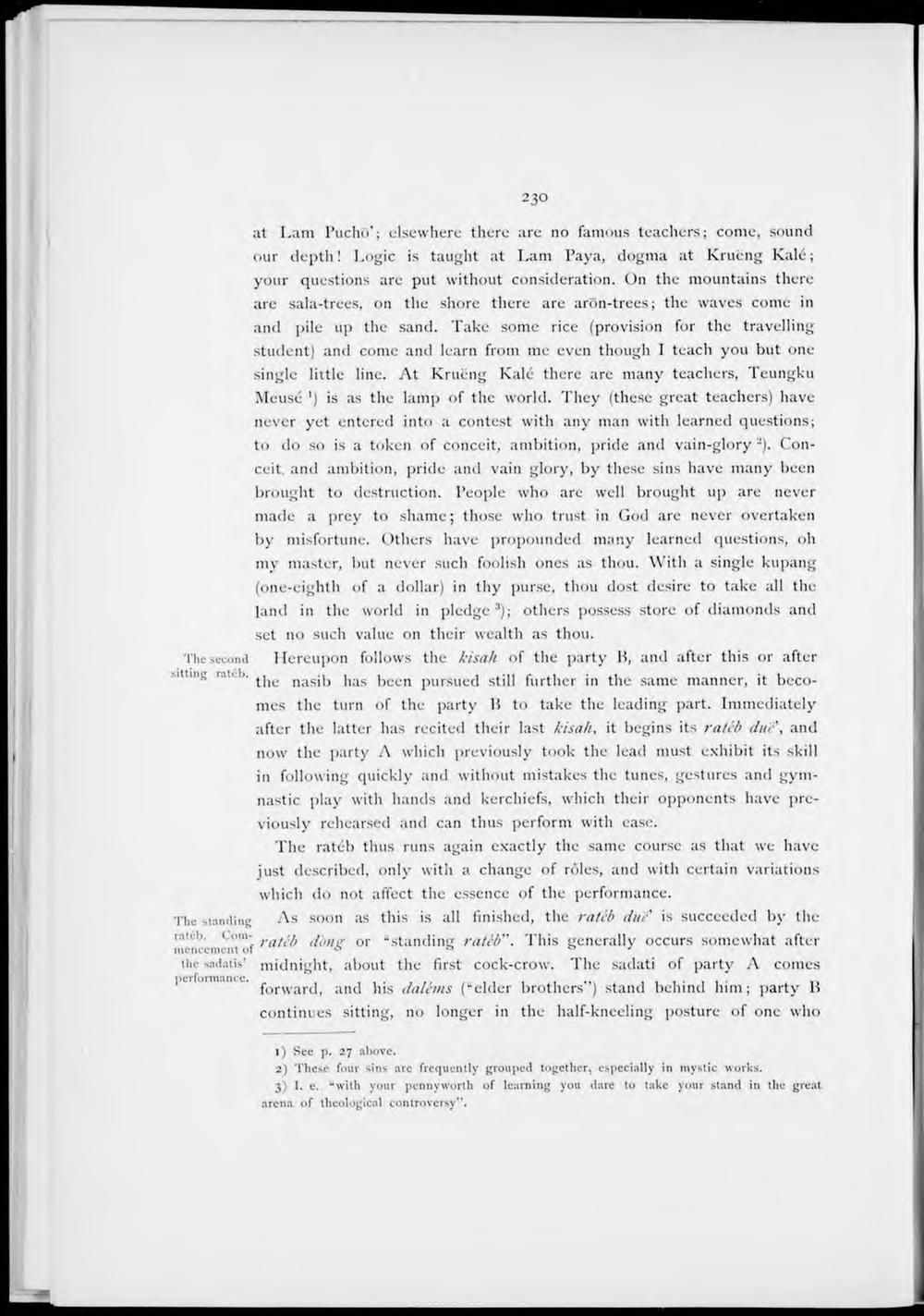 at Lam Puchö'; elsewhere therc are no famous teachers; comc, sound our depth! Logic is taught at Lam Paya, dogma at Krucng Kale; your questions are put without consideration. On the mountains there are sala-trees, on the shore there are arön-trees; the waves comc in and pile up the sand. Take some rice (provision for the travelling student) and comc and learn from me even though I teach you but one single little linc. At Krucng Kale there are many teachers, Teungku Meusé ') is as the lamp of the world. They (these great teachers) have never yet entcred into a contest with any man with learned questions; to do so is a token of conceit, ambition, pride and vain-glory 2). Conceit. and ambition, pride and vain glory, by these sins have many been brought to destruction. 1'eople who are well brought up are never made a prey to shame; those who trust in God are never overtaken by misfortune. Others have propounded many learned questions, oh my master, but never such foolish ones as tliou. With a single kupang (one-cighth of a dollar) in thy purse, tliou dost desire to take all the land in the world in pledge 3); others possess store of diamonds and set no such value on their wealth as thou.

The second Hereupon follows the kis ah of the party B, and after this or after sittmg ratel». nasib lias been pursued still further in the same manner, it becomes the turn of the party 15 to take the leading part. Immediately after the latter has recited their last kisah, it begins its ratêb duc', and now the party A whicli previously took the lead must exhibit its skill in following quickly and without mistakes the tunes, gestures and gymnastic play with hands and kerchiefs, which their opponents have previously rehearsed and can thus perform with ease.

The ratcb thus runs again exactly the same coursc as that we have just described, only with a change of röles, and with certain variations which do not affect the essence of the performance.

the sadatis' midnight, about the first cock-crow. The sadati of party A comes i cifoim.imx. |-orwarcj^ an(j his dalems ("cider brothers") stand behind him; party B continues sitting, no longer in the half-kneeling posture of one who

2) These four sins are fïequently grouped together, cspecially in mystic works.

3) I. e. "with your pennyworth of learning you dare to take your stand in the great arena of theological controversy".