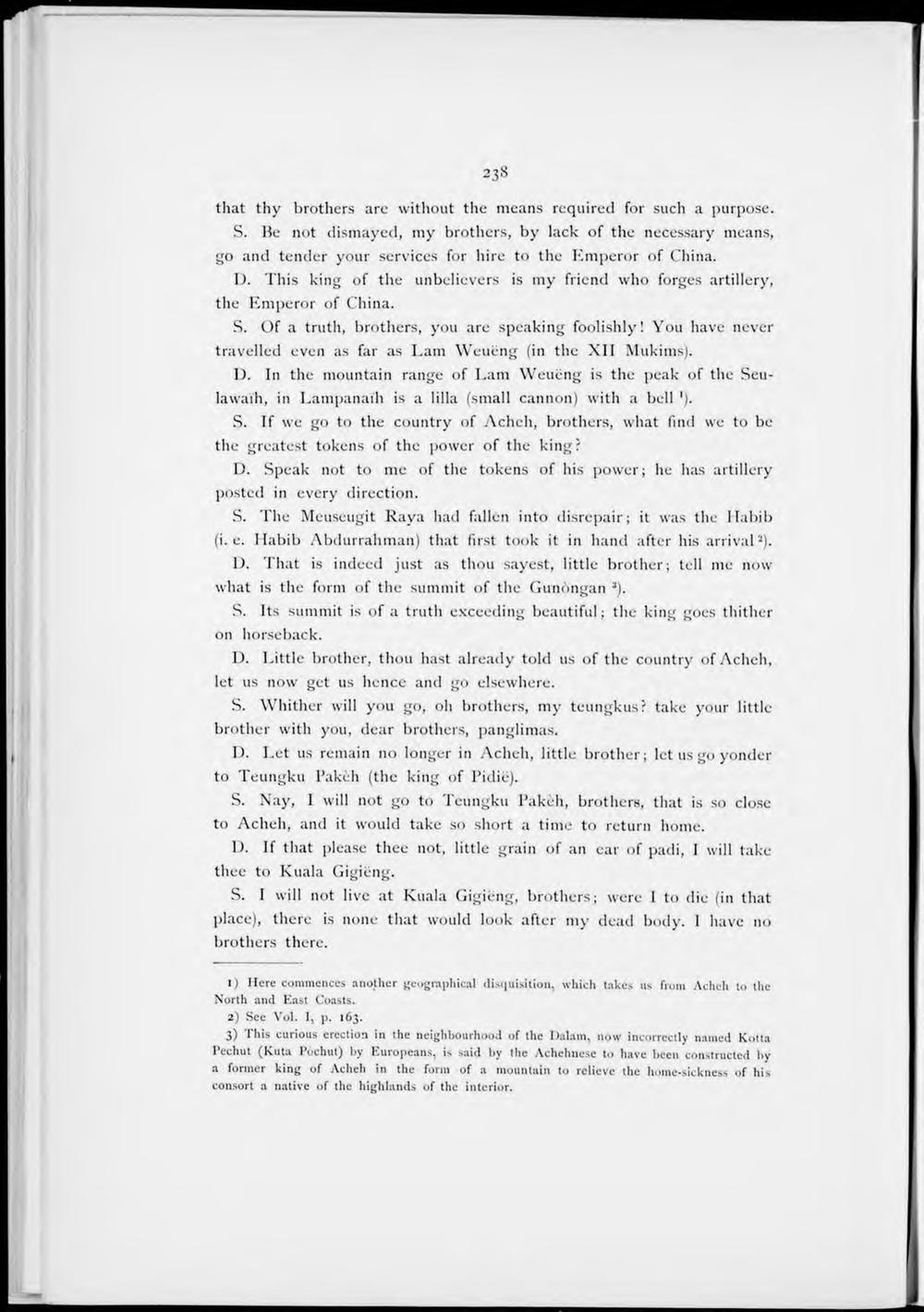 that thy brothers are without the means required for such a purpose.

S. Be not dismayed, my brothers, by lack of the necessary means, go and tender your services for hire to the Emperor of China.

D. This king of the unbelievers is my friend who forges artillery, the Emperor of China.

S. Of a truth, brothers, you are speaking foolishly! You have never travelled even as far as Lam Weuëng (in the XII Mukims).

D. In the mountain range of Lam Weuëng is the peak of the Seulawaïh, in Lampanaïh is a lilla (small cannon) with a bell ').

S. If we go to the country of Acheh, brothers, what find we to be the greatest tokens of the power of the king?

D. Speak not to me of the tokens of his power; he has artillery posted in every direction.

S. The Meuseugit Rava had fallen into disrepair; it was the Habib (i. e. Ilabib Abdurrahman) that first took it in hand after his arrival2).

D. That is indeed just as thou sayest, little brother; teil me now what is the form of the summit of the Gunóngan 3).

S. lts summit is of a truth exceeding beautiful; the king goes thither on horseback.

D. Little brother, thou hast already told us of the country of Acheh, let us now get us hence and go elsewhere.

S. Whither will you go, oh brothers, my teungkus? take your little brother with you, dear brothers, panglimas.

D. Let us remain no longer in Acheh, little brother; let us go yonder to Teungku 1'akèh (the king of Pidië).

S. Nay, I will not go to Teungku Pakèh, brothers, that is so close to Acheh, and it would take so short a time to return home.

1). If that please thee not, little grain of an ear of padi, I will take thee to Kuala Gigiëng.

S. I will not live at Kuala Gigiëng, brothers; were I to die (in that place), there is none that would look after my dead body. 1 have no brothers there.

1) Here commences another geographical disquisition, which takes us from Acheh to the North and East Coasts.

3) This curious erection in the neighbourhood of the Dalam, now incorrectly named Kotta Pechut (Kuta Póchut) by Europeans, is said by the Achehnese to have been constructed by a former king of Acheh in the form of a mountain to relieve the home-sickness of his consort a native of the highlands of the interior.