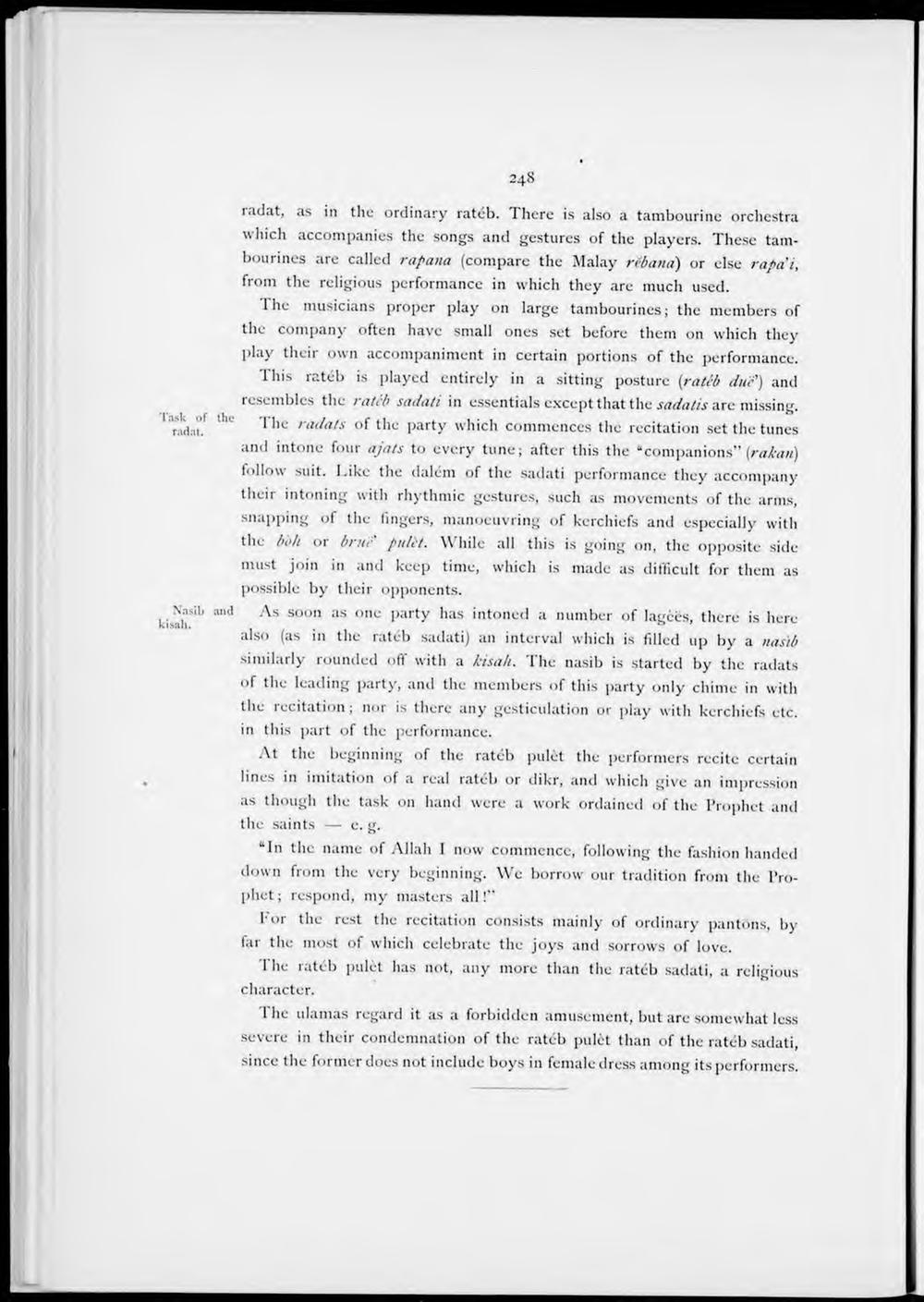 radat, as in the ordinary ratéb. There is also a tambourinc orchcstra which accompanies the songs and gestures of the players. These tambourines are called rapana (compare the Malay rebana) or else rapdi, from the religious performance in which they are much used.

The musicians proper play on large tambourines; the members of the company often have small ones set before them on which they play thcir own accompaniment in certain portions of the performance.

This ratéb is played entirely in a sitting posture (tratéb duë') and resembles the vatcb sciduti in essentials exceptthat the sadatis are missing. ' nuiat'! llU Ille r'ulats °f tl11-" party which commences the recitation set the tunes and intone four ajats to every tune; after this the "companions" (rakan) follow suit. Like the dalem of the sadati performance they accompany their intoning with rhythmic gestures, such as movements of the arms, snapping of the fingers, manoeuvring of kerchiefs and especially with the bbh or bntr pulèt. While all this is going on, the opposite side must join in and keep time, which is made as difficult for them as possible by their opponents.

N'asib and As soon as one party lias intoned a number of lagèës, there is here also (as in the ratéb sadati) an interval which is filled up by a nastb similarly rounded off with a kis ah. The nasib is started by the radats of the leading party, and the members of this party only chime in with the recitation; nor is there any gesticulation or play with kerchiefs etc. in this part of the performance.

At the beginning of the ratéb pulèt the performers recite certain lines in imitation of a real ratéb or dikr, and which give an impression as though the task on hand were a work ordained of the Prophet anti the saints — e. g.

"In the name of Allah I now commcnce, follovving the fashion handed down from the very beginning. We borrow our tradition from the l'rophet; respond, my masters all!"

For the rest the recitation consists mainly of ordinary pantons, by far the most of which celebrate the joys and sorrows of love.

The ulamas regard it as a forbidden amusement, but are somewhat less severe in their condemnation of the ratéb pulèt than of the ratéb sadati, since the formerdoes not includc boys in femaledress among its performers.