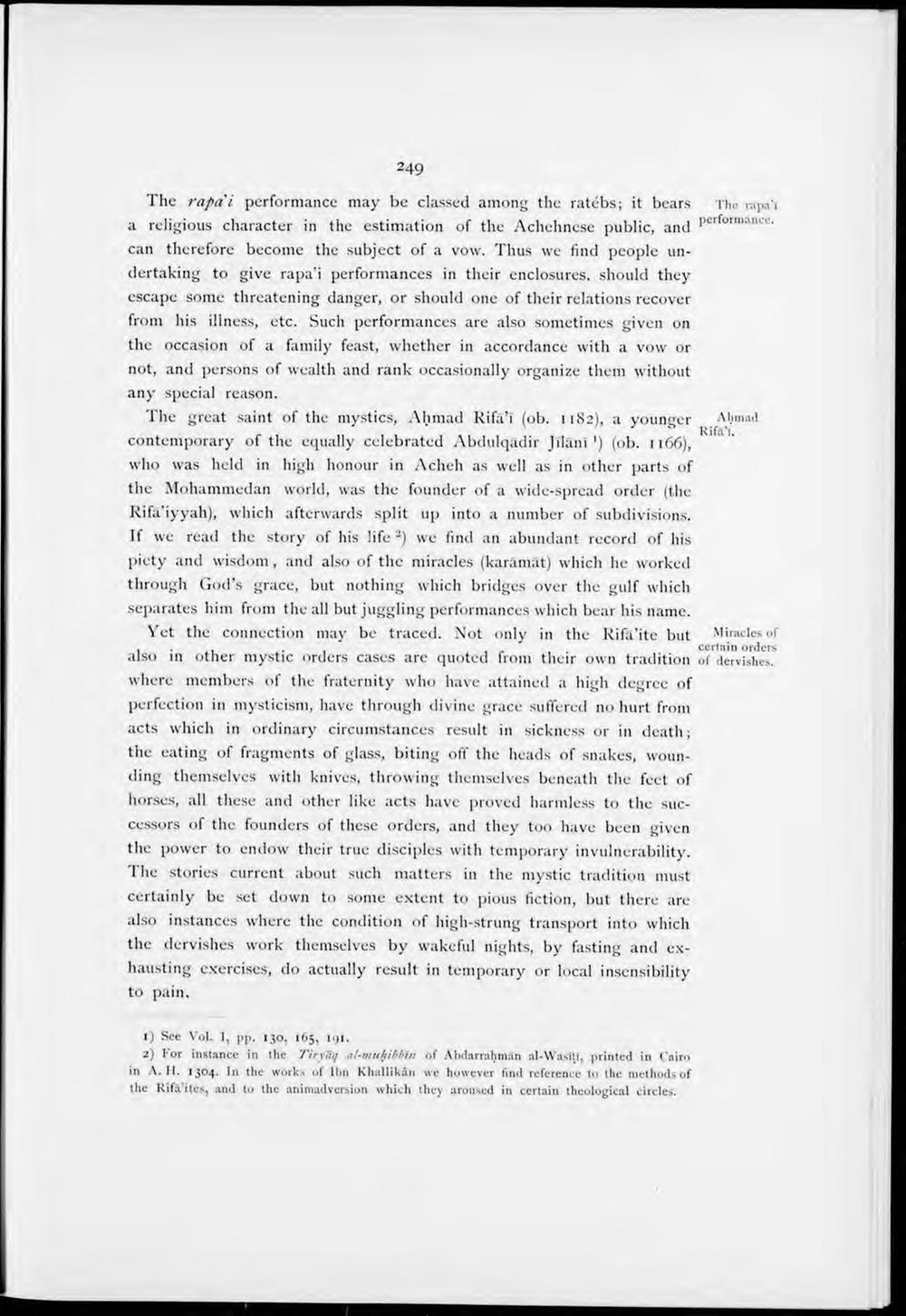 The rapdi performance may be classed among the ratébs; it bears The rapa'i a religious character in the estimation of the Achehnese public, and Pel ormalKecan therefore become the subject of a vow. Thus we find people undertaking to give rapa'i performances in their enclosures, should they escape some threatening danger, or should one of their relations recover from his illness, etc. Such performances are also sometimes given on the occasion of a family feast, whether in accordance with a vow or not, and persons of wealth and rank occasionally organize them without any special reason.

The great saint of the mystics, Ahmad Rifa'ï (ob. 1182), a younger Ahmad contemporary of the equally celebrated Abdulqadir JllanI') (ob. 1166),

who was held in high honour in Acheh as well as in other parts of the Mohammedan world, was the founder of a wide-spread order (the Rifa'iyyah), which afterwards split up into a number of subdivisions.

If we read the story of his life 2) we find an abundant record of his piety and wisdom, and also of the miracles (karamat) which he worked through God's grace, but nothing which bridges over the gulf which separates him from the all but juggling performances which bear his name.

Yet the connection may be traced. Not only in the Rifa'ite but Miracles of ... . certain orders

also in other mystic orders cases are quoted from their own tradition of dervishes.

perfection in mysticism, have through divine grace suffe red 110 liurt from

acts which in ordinary circumstances result in sickness or in death;

the eating of fragments of glass, biting off the heads of snakes, woun-

horses, all these and other like acts have proved harmiess to the suc-

cessors of the founders of these orders, and they too have been given

the power to endow their true disciples with temporary invulnerability.

The stories current about such matters in the mystic tradition must

certainly be set down to some extent to pious fiction, but there are

also instances where the condition of high-strung transport into which

the dervishes work themselves by wakeful nights, by fasting and ex-

hausting exercises, do actually result in temporary or local insensibility

2) Kor instance in the Tiryaq al-muhibbïn of Abdarrahman al-Wasïtï, printed in Cairo in A. II. 1304- In the works of Ibn Khallikan we however find reference to the methods of the Rifa'ites, and to the animadversion which they aroused in certain theological circles.