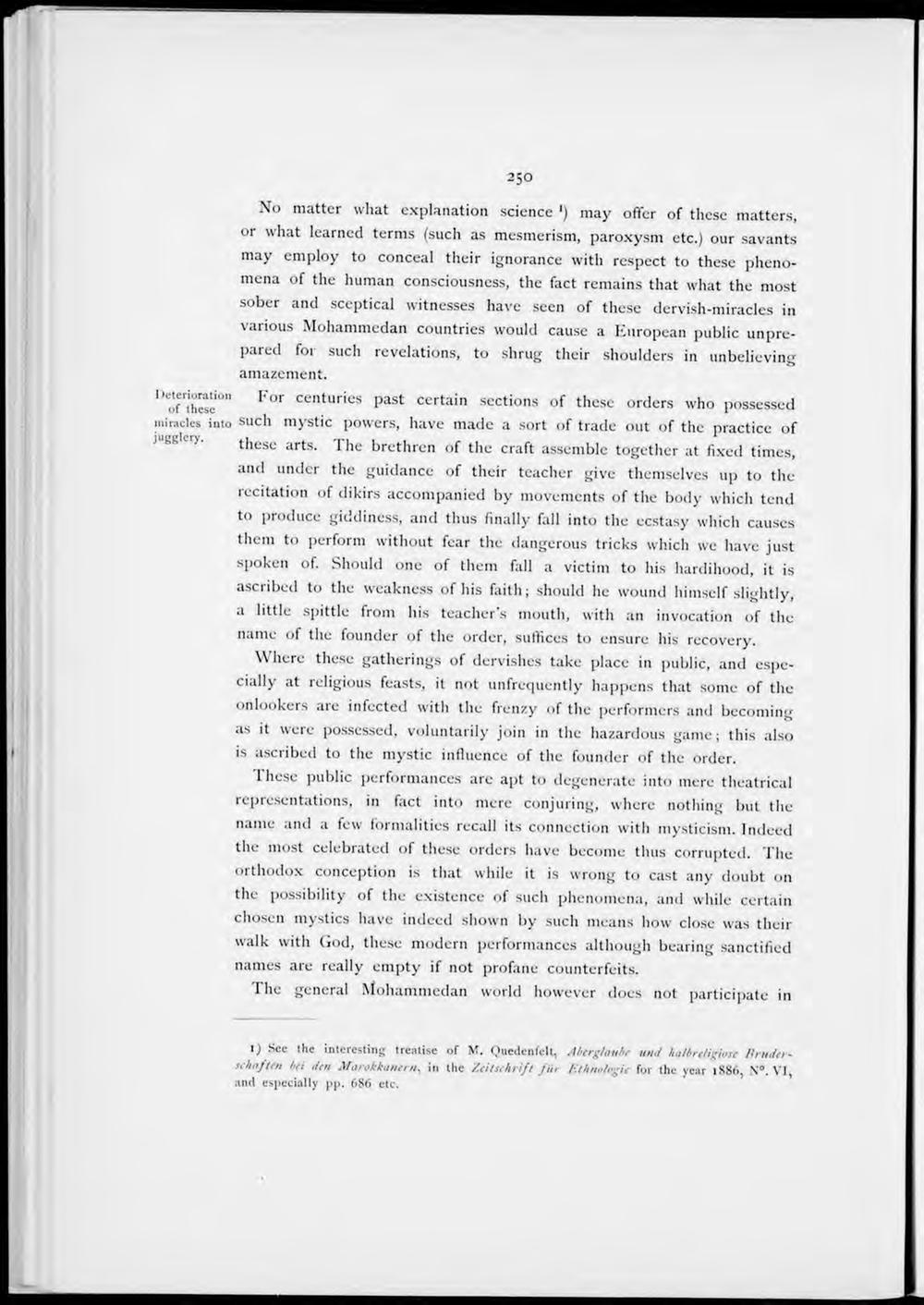 iNo matter what explanation science ') may offer of these matters, or what learned terms (such as mesmerism, paroxysm etc.) our savants may employ to conceal their ignorance with respect to these phenomena of the hurnan consciousness, the fact remains that what the most sober and sceptical witnesses have seen of these dervish-miracles in various Mohammedan countries would cause a European public unprepared foi such revelations, to shrug their shoulders in unbelicving amazement.

oTthesc'0" ' °r ccn*ur'es Past certain sections of these orders who possessed miracles into such mystic powers, have made a sort of trade out of the practice of these arts. 1 he brethren of the craft assemble together at fixed times, and under the guidance of their teacher give themselves up to the recitation of dikirs accompanied by movements of the body which tend to produce giddiness, and thus finally fall into the ecstasy which causes them to perform without fear the dangerous tricks which we have just spoken of. Should one of them fall a victim to his hardihood, it is ascribed to the weakness of his faith; should he wound himself slightly, a little spittle from his teacher s mouth, with an invocation of the name of the founder of the order, suffices to ensure his recovery.

\\ here these gatherings of dervishes take place in public, and especially at religious feasts, it not unfrequently happens that some of the onlookers are infected with the frenzy of the performers and becoming as it were possessed, voluntarily join in the hazardous game; this also is ascribed to the mystic influence of the founder of the order.

These public performances are apt to degenerate into mere theatrical representations, in fact into mere conjuring, where nothing but the name and a few formalities recall its connection with mysticism. Indeed the most celebratcd of these orders have bccome thus corrupted. The orthodox conception is that while it is wrong to cast any doubt on the possibility of the existence of such phenomena, and while certain chosen mystics have indeed shown by such means how close was their walk with God, these modern performances although bearing sanctifkd names are really empty if not profane counterfeits.

The general Mohammedan world however does not participate in