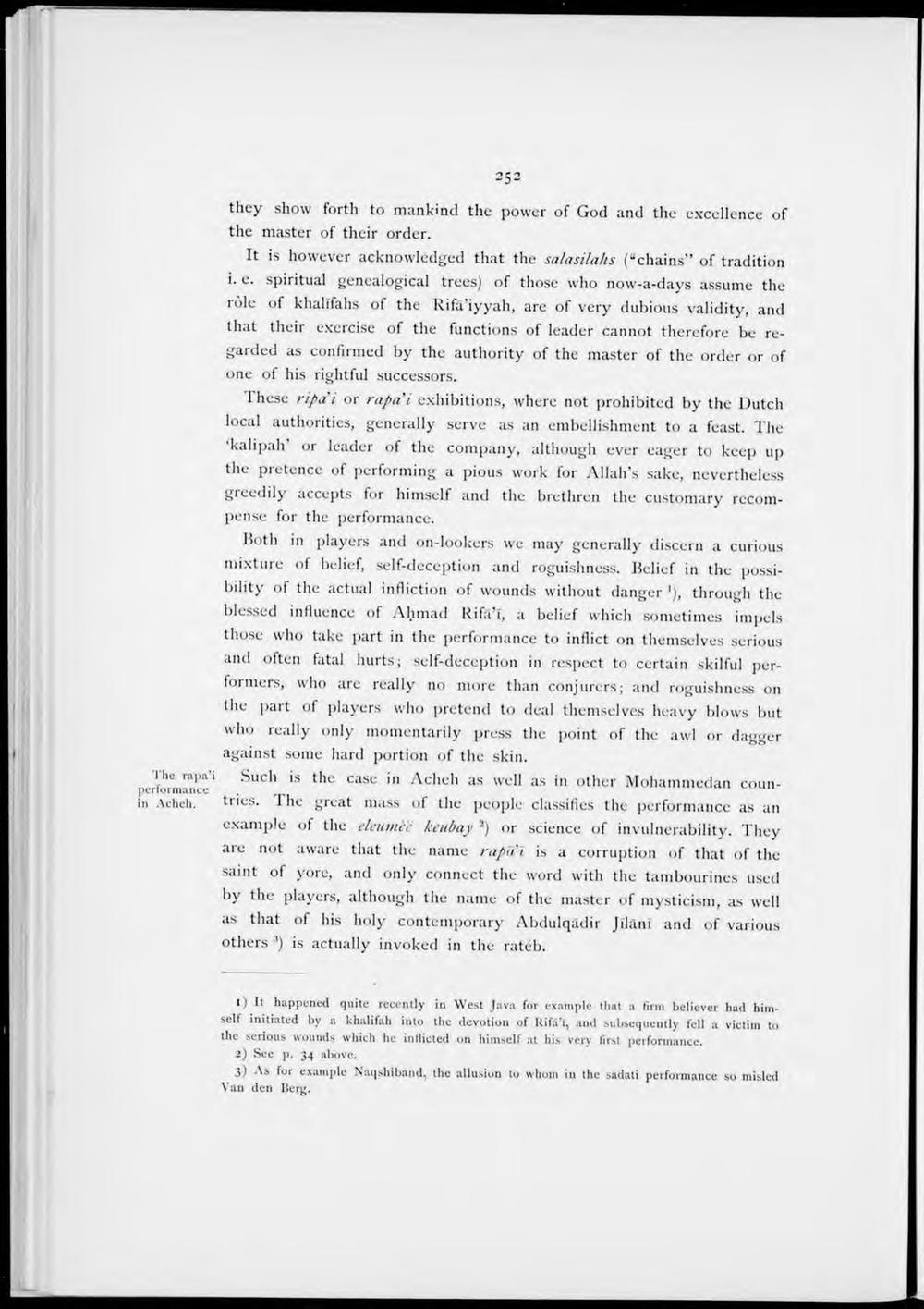 they show forth to mankind the power of God and the excellence of the master of their order.

It is however acknowledged that the salasilahs ("chains" of tradition i. e. spiritual genealogical trees) of those who now-a-days assume the role of khalïfahs of the Rifa'iyyah, are of very dubious validity, and that their exercise of the functions of leader cannot therefore be regarded as confirmed by the authority of the master of the order or of one of his rightful successors.

1 hese ripa 1 or rapa 1 exhibitions, where not prohibited by the Dutch local authorities, generally serve as an embellishment to a feast. The 'kalipah or leader of the company, although ever eager to keep up the pretence of performing a pious work for Allah's sake, nevertheless greedily accepts for himself and the brethren the customary recompense for the performance.

lioth in players and on-lookers we may generally discern a curious mixture of belief, self-deception and roguishness. Belief in the possibility of the actual infliction of wounds without danger '), through the blessed inlluence of Ahmad Rifa'ï, a belief which sometimes impels those who take part in the performance to intlict on themselves serious and often fatal hurts; self-deception in respect to certain skilful performers, who are really no more than conjurers; and roguishness 011 the part of players who pretend to deal themselves heavy blows but who really only momentarily press the point of the awl or dagger against some hard portion of the skin.

performance' -^uc'1 's l'le casc 'n Acheh as well as in other Mohammedan counin Acheh. tries. 1 he great mass of the people classifies the performance as an example of the eleumec keubay 2) or science of invulnerability. They aie not aware that the name rapïil is a corruption of that of the saint of yore, and only connect the word vvith the tambourines used by the players, although the name of the master of mysticism, as well as that of his holy contemporary Abdulqadir Jïlani and of various others 3) is actually invoked in the ratéb.

1) It happened quite recently in West Java for example that a firm believer had himself initiated by a khalifah into the devotion of Rifa'ï, and subsequently feil a victim to the serious wounds which he inflicted on himself at his very fust performance.

3) As for example Naqsliiband, the allusion to whom in the sadati performance so misled Van den lïerg.