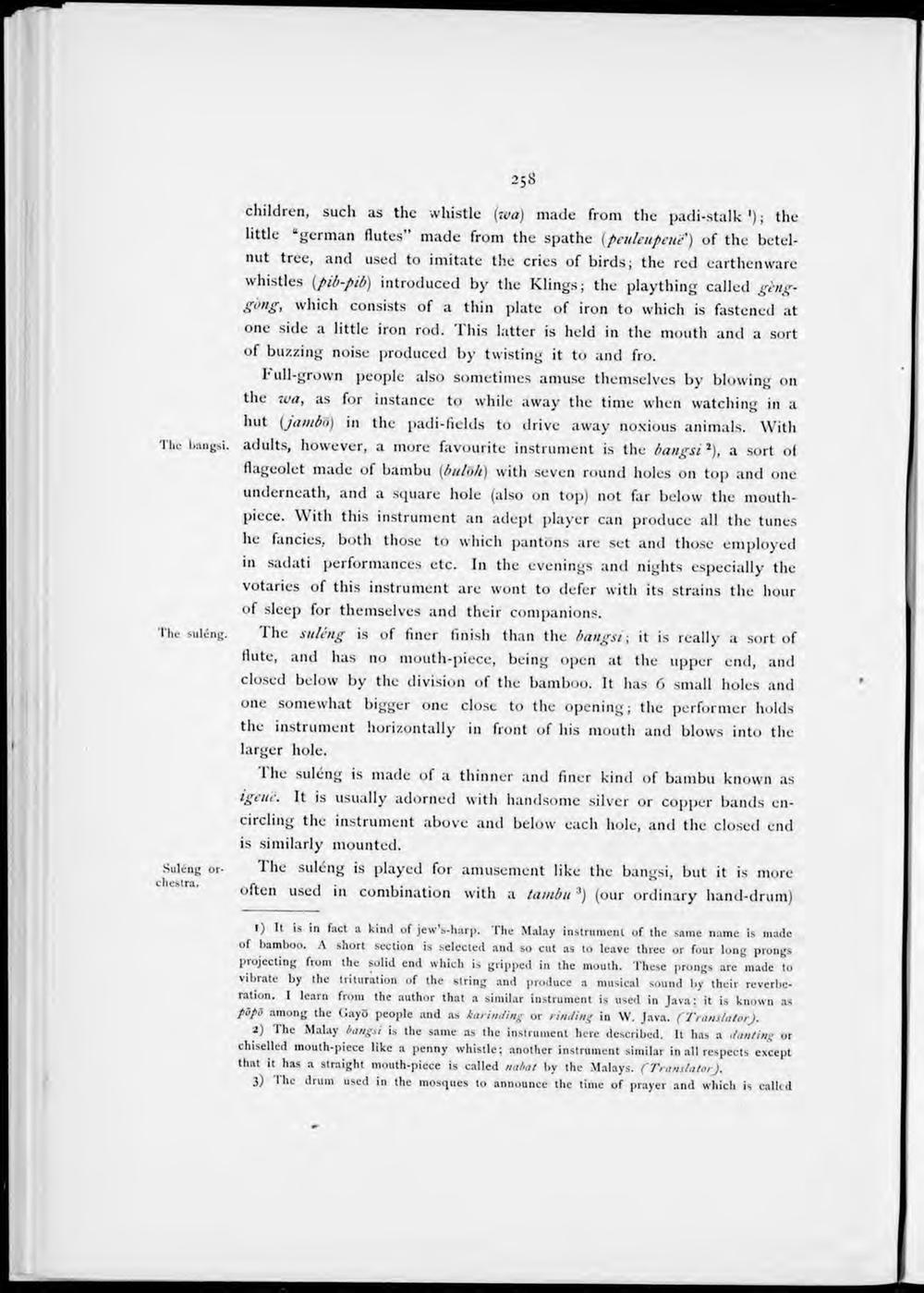 children, such as the whistle (wa) made from the padi-stalk *); the littlc german flutes made from the spatlie (peuleupeuë') of the betelnut tree, and used to imitate the cries of birds; the red earthenware whistles [pib-pib) introduced by the Klings; the plaything called genggong, which consists of a thin plate of iron to which is fastened at one side a little iron rod. 1 his latter is held in the mouth and a sort of buzzing noise produced by twisting it to and fro.

1' ull-grown people also sometimes amuse themselves by blowing on the wa, as for instance to while away the time when watching in a luit (jambo) in the padi-fields to drive away noxious animals. Witli

1 he bangsi. adults, however, a more favourite instrument is the bangst 2), a sort of flageolet made of bambu (bulöh) witli seven round holes on top and one underneath, and a square hole (also on top) not far below the mouthpiece. With this instrument an adept player can produce all the tunes he fancies, both those to which pantöns are set and those employed in sadati performances etc. In the evenings and nights cspecially the votaries of this instrument are wont to defer with its strains the hour of sleep for themselves and their companions.

The suléng. The suléng is of finer finish than the bangsi; it is really a sort of flute, and lias no mouth-piece, being open at the upper end, and closed below by the division of the bamboo. It has 6 small holes and one somewhat bigger one close to the opening; the performer holds the instrument hoiizontally in front of his mouth and blows into the larger hole.

1 he suléng is made of a thinner and finer kind of bambu known as igeiic. It is usually adorned with handsome silver or copper bands encircling the instrument above and below each hole, and the closed end is similarly mounted.

Suléng or- 1 he suléng is played for amusement like the bangsi, but it is more often used in combination with a tambu3) (our ordinary hand-drum)

r) It is in fact a kind of jew's-harp. The Malay instrument of the same name is made of bamboo. A short section is selected and so cut as to leave three or four long prongs piojecting from the solid end which is gripped in the mouth. These prongs are made to vibrate by the trituration of the string and produce a musical sound by their reverberation. I learn from the author that a similar instrument is used in Java; it is known as fopo among the Gayö people and as karinding or rinding in VV. Java. (Transistor).

2) Ihe Malay bangsi is the same as the instrument here described. It has a danting or chiselled mouth-piece like a penny whistle; another instrument similar in all respects except that it has a straight mouth-piece is called na bat by the Malays. (Translater).