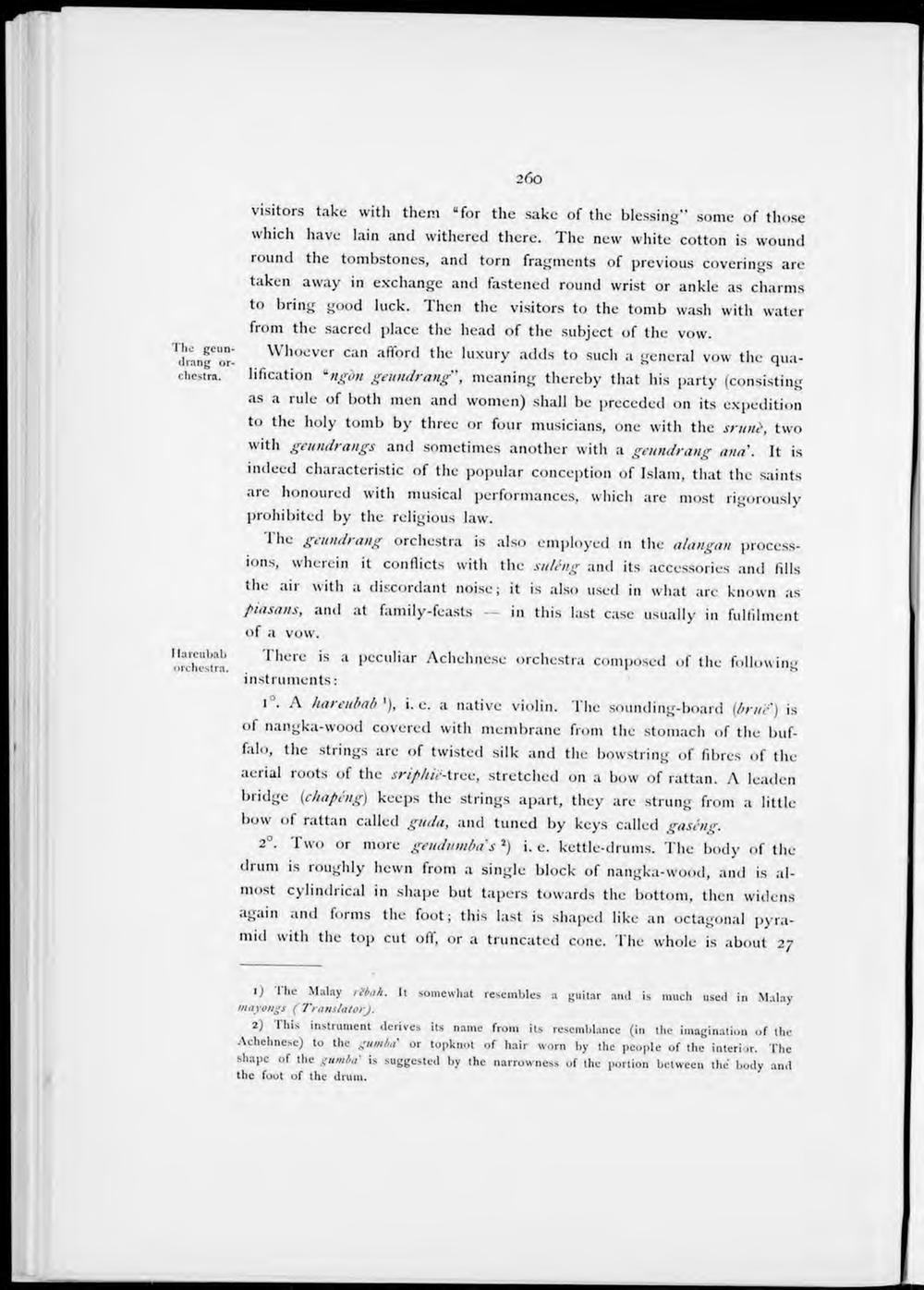 visitors take witli them "tor the sake of the blessing" some of those which have lain and withered there. The nevv white cotton is wound round the tombstones, and torn fragments of previous coverings are taken away in exchange and fastened round wrist or ankle as eharms to bring good luck. Ihen tlie visitors to the tomb wash with water from the sacrcd place the head of the subject of the vow.

'ihang6 or- Whoever can »fford the luxury adds to sucli a general vow the quachesira. lification 'ngim geundrangmeaning thereby that liis party (consisting as a rule of both men and women) shall be preceded on its expedition to the holy tomb by three or four musicians, one with the srunè, two with geundrangs and sometimes another with a geutnlrang ana . It is indeed characteristic of the popular conception of Islam, that the saints are honoured with musical performances, which are most rigorously prohibited by the religious law.

1 he geundrang orchestra is also employed in the alangan processions, wherein it conflicts with the suléng and its accessories and fills the air with a discordant noise; it is also used in what are known as piasans, and at family-feasts — in this last case usually in fulfilment of a vow.

I . A hareubab '), i. e. a native violin. The sounding-board (brue) is of nangka-wood covered with membrane from the stomach of the buffalo, the strings are of twisted silk and the bowstring of fibres of the aerial roots of the sriphië-tree, stretched on a bow of rattan. A leaden bridge (chapeng) keeps the strings apart, tliey are strung from a little bow of rattan called guda, and tuned by keys called gasêng.

2°. Two or more geudumba s2) i. e. kettle-drums. The body of the drum is roughly hewn from a single block of nangka-wood, and is almost cylindrical in shape but tapers towards the bottom, then widens again and forms the foot; this last is shaped like an octagonal pyramid with the top cut off, or a truncated cone. The whole is about 27

ij 1 he Malay rlbah. It somewhat resembles a guitar and is much used in Malay

2) This instrument derives its name from its resemblance (in the imagination of the Achehnese) to the gumiu' or topknot of hair worn by the people of the interior. The shape of the gumba' is suggested by the narrowness of the portion between the' body and the foot of the drum.