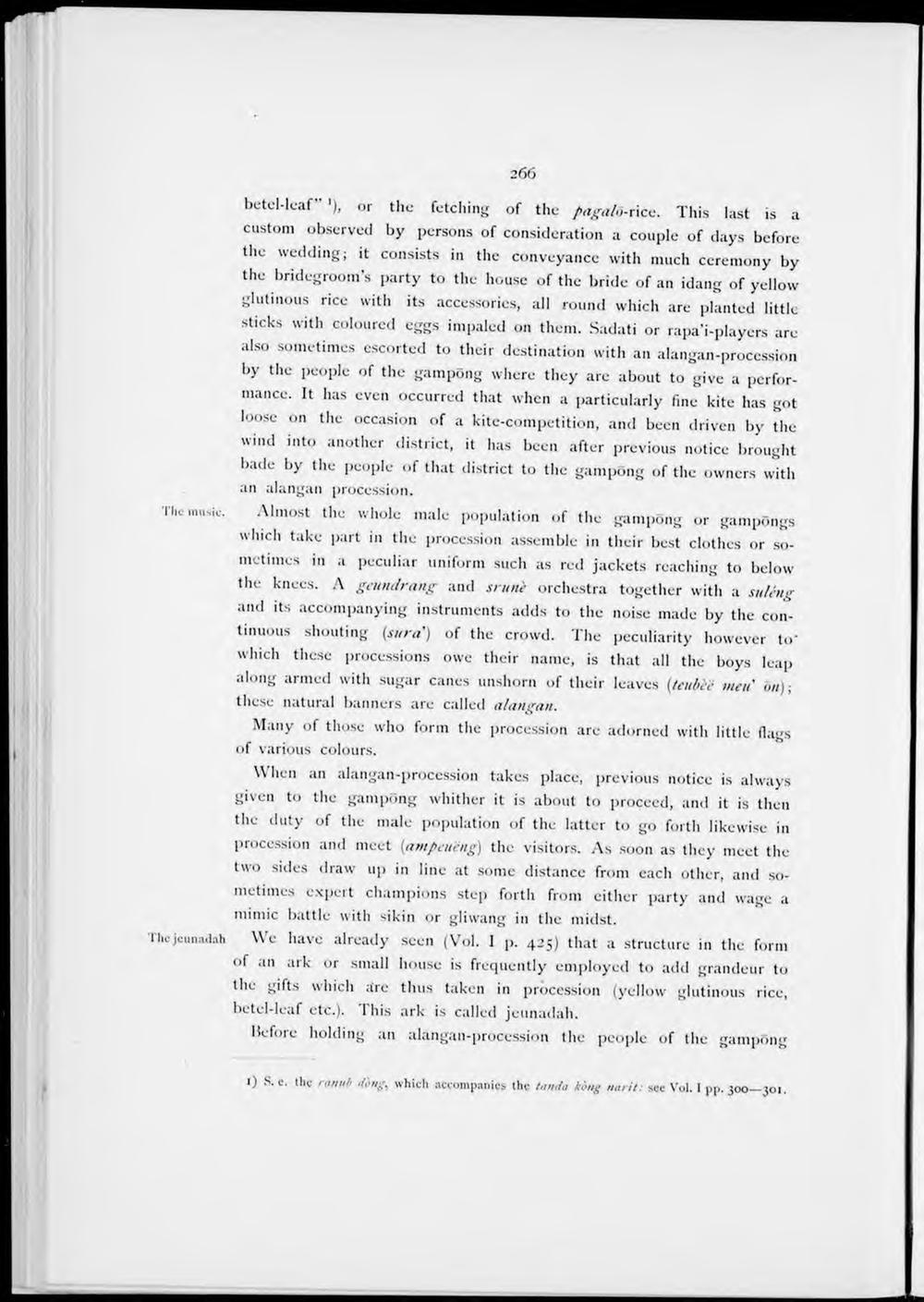 betel-leaf" '), or the fetching of the pagalö-rice. This last is a custom observed by persons of consideration a couple of days before the wedding; ït consists in the conveyance with much ceremony by the bridegroom's party to the house of the bride of an idang of yellow glutinous rice with its accessories, all round which are planted little sticks with coloured eggs impaled on them. Sadati or rapa'i-players are also sometimes escorted to their destination with an alangan-procession by the people of the gampöng where they are about to give a performance. It has even occurred that when a particularly fine kite has got loose 011 the occasion of a kite-competition, and been driven by the wind into another district, it has been after previous notice brought bade by the people of that district to the gampöng of the owners with an alangan procession.

Thcmusie. Almost the whole male population of the gampöng or gampöngs which take part in the procession assemble in their best clothes or sometimes in a peculiar uniform such as red jackets reaching to below the knees. A geundrang and srunè orchestra together with a sulêng and its accompanying instruments adds to the noise made by the continuous shouting (sura') of the crowd. The peculiarity however to' which these processions owe their name, is that all the boys leap along armed with sugar canes unshorn of their leaves (teubeé meu on); these natural banners are called alangan.

Many of those who forin the procession are adorned with little flags of various colours.

When an alangan-procession takes place, previous notice is always given to the gampöng whither it is about to proceed, and it is then the duty of the male population of the latter to go forth likewise in procession and meet {ampeueng) the visitors. As soon as they meet the two sides draw up in line at some distance from each other, and sometimes expert champions step forth from either party and wage a mimic battle with sikin or gliwang in the midst.

Thcjeunadah We have already seen (Vol. I p. 425) that a structure in the form of an ark or small house is frequently employed to add grandeur to the gifts which are thus taken in proccssion (yellow glutinous rice, betel-leaf etc.). 1 his ark is called jeunadah.