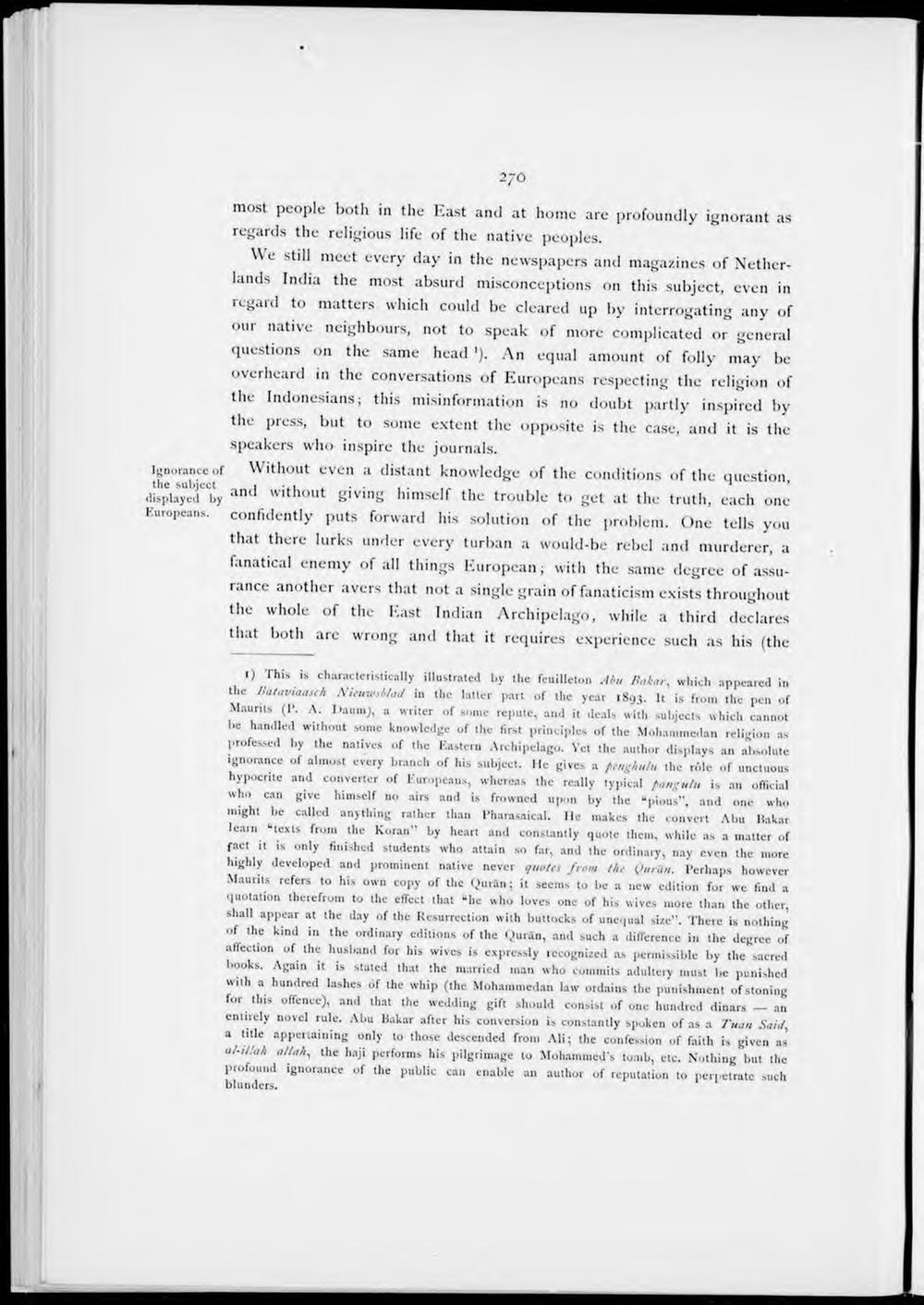 most people both in the Kast and at home are profoundly ignorant as regards the religious life of the native peoples.

We still meet every day in the newspapers and magazines of Netherlands India the most absurd misconceptions 011 this subject, even in rcgard to matters which could be cleared up by interrogating any of our native neighbours, not to speak of more complicated or general questions on the same head '). An equal amount of folly may be overheard in the conversations of Europeans respecting the religion of the Indonesians; this misinformation is no doubt partly inspired by the press, but to some extent the opposite is the case, and it is the speakers who inspire the journals.

displayed by an<l wlthoilt giving himself the trouble to get at the truth, each one

Europeans. confidently puts forward liis solution of the problem. One tells you that there lurks under every turban a would-be rebel and murderer, a fanatical enemy of all things European; with the same degree of assurance another avers that not a single grain of fanaticism exists throughout the wliole of the Kast Indian Archipelago, while a third declares that both are wrong and that it requires experience such as his (the

i) This is characteristically illustrated by the feuilleton A/m Bakar, which appeared in

the Initaviaasch Nieuwsblad in the latter part of the year 1893. It is froin the pen of

Maunts (1'. A. Daumj, a writer of some repute, and it deals with subjects which cannot

professed by the natives of the Kasten Archipelago. Vet the author displays an absolute

ignorance of almost every branch of his subject. He gives a pc,iSh„l„ the róle of unctuous

hypocrite and converter of Europeans, whereas the really typical pangulu is an official

who can give lumself no airs and is frowned upon by the «pious", and one who

learn "texts from the Koran" by heart and constantly quote tliem, while as a matter of

fact it is only finished students who attain so far, and the ordinary, nay even the more

h>ghly developed and prominent native never quotes from the Quran. I'erhaps however

Maurits refers to his own copy of the Quran; it seems to be a new edition for we find a

quotation therefrom to the effect that «he who loves one of his wives more than the othcr,

shall appear at the day of the Resurrection with buttocks of unequal size". There is nothing

of the kind in the ordinary editions of the Quran, and such a difference in the degree of

books. Again it is stated that the married man who commits adultery must be punished

for this offence), and that the wedding gift should consist of one hundred dinars _ an

entirely novel rule. Abu Bakar after his conversion is constantly spoken of as a Tuan Sai,/,

a title appertaining only to those dcscended from Ali; the confession of faith is given as

"/-i/.'ah allah, the haji performs his pilgrimage to Mohammed's tomb, etc. Nothing but the

profound ignorance of the public can enable an author of reputation to peri.etrate such blunders.