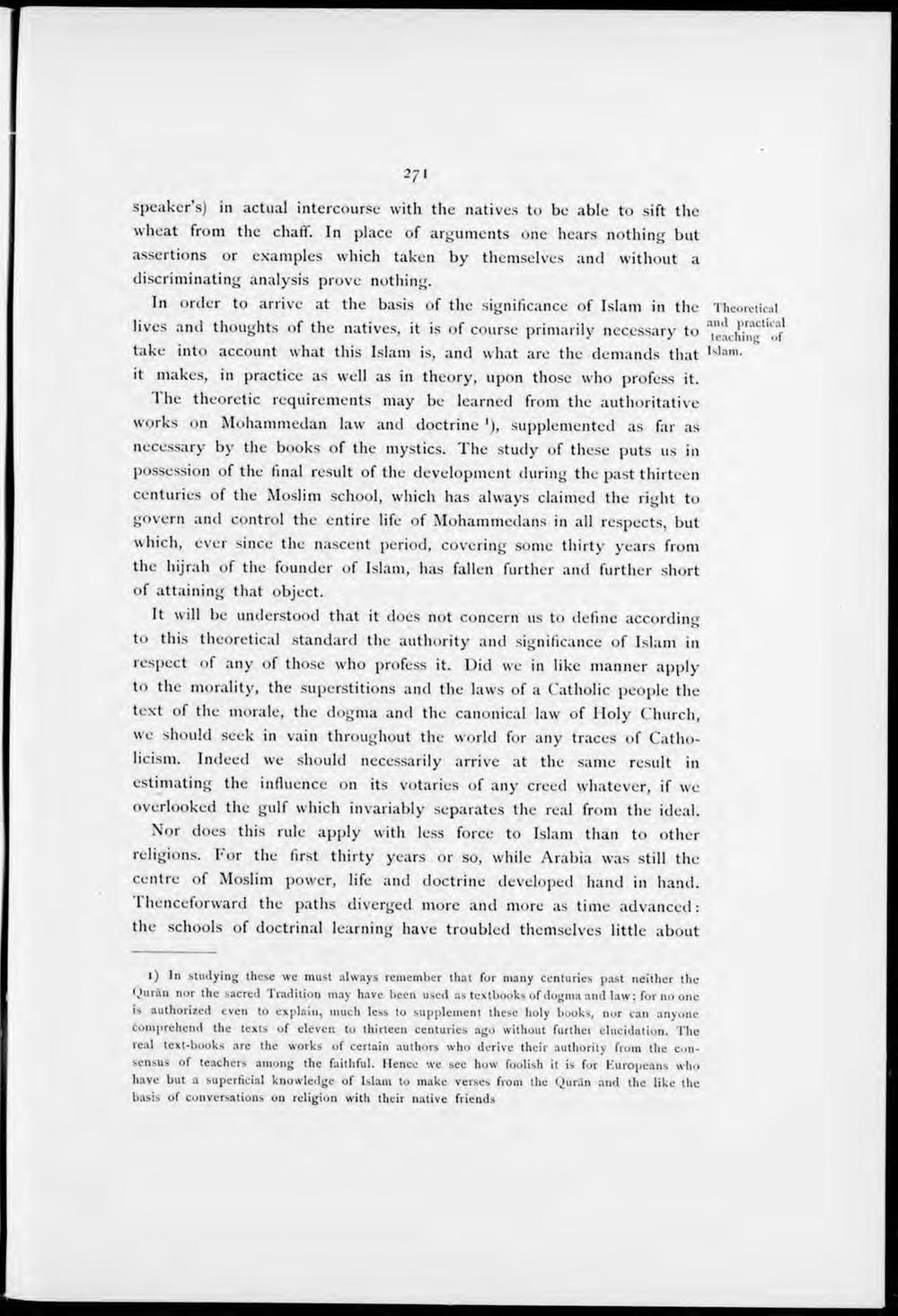 speakers) in actual intercourse vvith the natives to be able to sift the wheat froni the cliafif. In place of arguments one hears nothing hut assertions or examples which taken by themselves and without a discriminating analysis prove nothing.

In order to arrivé at the basis of the significance of Islam in the Theoretical lives and thoughts of the natives, it is of course primarily nec.essary to take into account what this Islam is, and what are the demands that ,slamit makes, in practice as well as in theory, upon those vvho profess it.

The theoretic requirements may be learned from the authoritative works on Mohammedan law and doctrine '), supplemented as far as necessary by the books of the mystics. The study of these puts us in possession of the final result of the development during the past thirteen centuries of the Moslim school, which has always claimed the right to govern and control the entire life of Mohammedans in all respects, but which, ever since the nascent period, covering some thirty years from the hijrah of the founder of Islam, has fallen further and further short of attaining that object.

It will be understood that it does not concern us to define according to this theoretical Standard the authority and significance of Islam in respect of any of those who profess it. Did we in like manner apply to the morality, the superstitions and the lavvs of a Catholic people the text of the morale, the dogma and the canonical law of Holy Church,

we should seek in vain throughout the world for any traces of Catholicism. Indeed we should necessarily arrivé at the same result in estimating the influence 011 its votaries of any creed whatever, if we overlooked the gulf which invariably separates the real from the ideal.

Nor does this rule apply with less force to Islam than to other religions. For the first thirty years or so, while Arabia was still the centre of Moslim power, life and doctrine developed hand in hand. I henceforward the paths diveryed more and more as time advanced: the schools of doctrinal learning have troubled themselves little about

1) In studying these we must always remember that for many centuries past neithcr the Quran nor the sacred Iradition may have been used as textbooks of dogma and law; for no one is authorized even to explain, much less to supplement these holy books, nor can anyone comprehend the texts of eleven to thirteen centuries ago without furthei elucidation. The real text-books are the works of certain authors who derive their authority from the consensus of teachers among the faithful. Hence we sec how foolish it is for Europeans who have but a superficial knowledge of Islam to make verses from the Quran and the like the basis of conversations on religion with their native friends