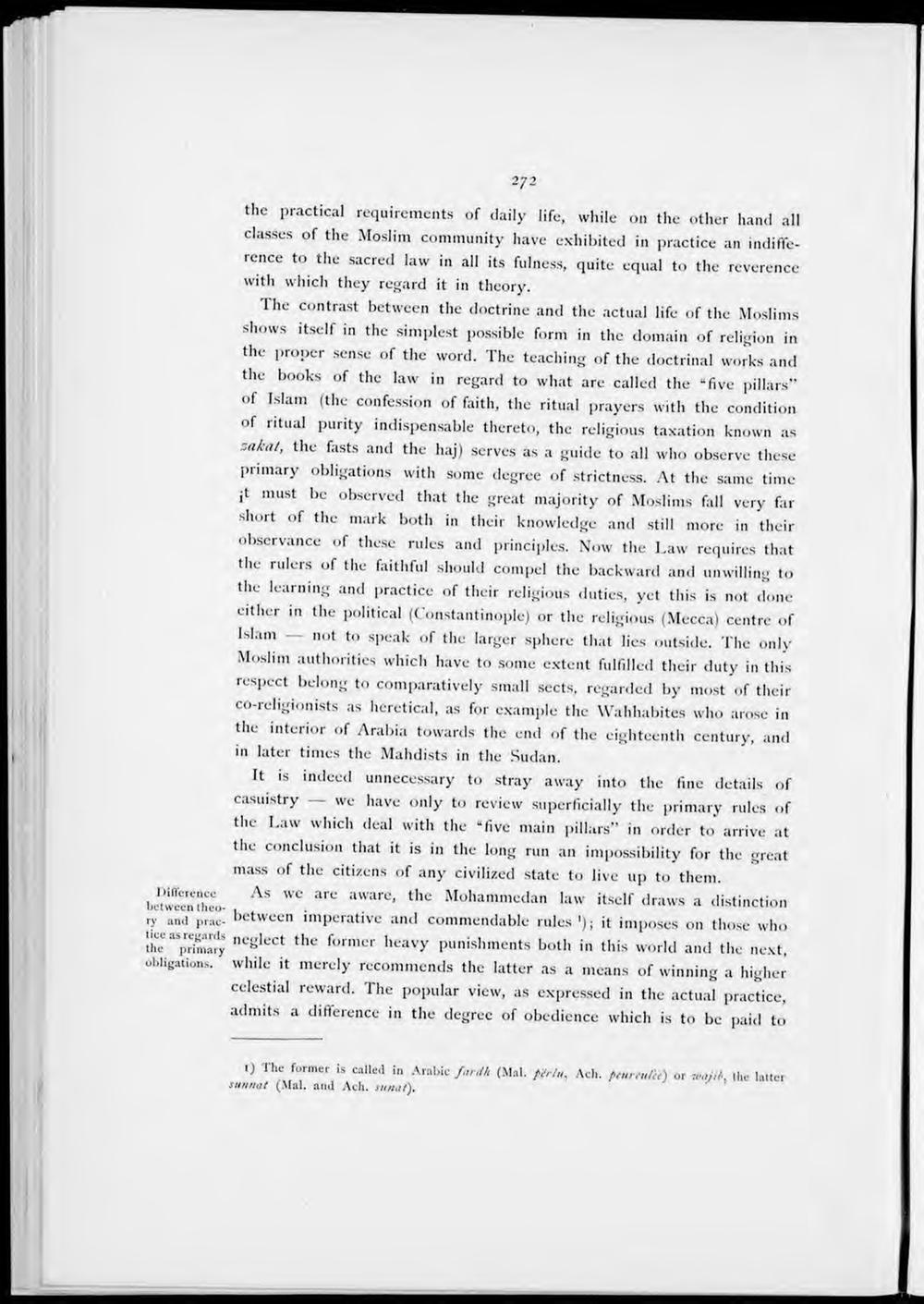 the practical requirements of daily Iife, while on the other hand all classes of the Moslim community have exhibited in practice an indifference to the sacred law in all its fulness, quite equal to the reverence with vvhich they regard it in theory.

Ihe contrast between the doctrine and the actual life of the Moslims shows itself in the simplest possible form in the domain of religion in the proper sense of the word. The teaching of the doctrinal works and the books of the law in regard to what are called the "five pillars" of Islam (the confession of faith, the ritual prayers with the condition of ritual purity indispensable thereto, the religious taxation known as zakat, the fasts and the haj) serves as a guide to all who observe these primary obligations with some degree of strictness. At the samc time jt must be observed that the great majority of Moslims fall very far short of the mark both in their knowledge and still more in their observance of these rules and principles. Now the Law requires that the rulers of the faithful should compel the backward and unwilling to the learning and practice of their religious duties, yet this is not donc either in the political (Constantinople) or the religious (Mecca) centre of Islam — not to speak of the larger sphere that lies outside. The only Moslim authorities which have to some extent fulfilled their duty in this respect belong to comparatively small sects, regarded by most of their co-religionists as heretical, as for example the Wahhabites who arose in the interior of Arabia towards the end of the eighteenth century, and in later times the Mahdists in the Sudan.

It is indeed unnecessary to stray away into the fine details of casuistry — we have only to re view superficially the primary rules of the Law which deal with the «five main pillars" in order to arrivé at the conclusion that it is in the long run an impossibility for the great mass of the citizens of any civilized state to live up to them.

bJtweenfheo- ^ W<\ arC aWarC' thc Moham™dan law itself draws a distinction ry and prac- between imperative and commendable rules '); it imposes on those who

the aSpHmary neSlect the former heavy punishments botli in this world and the next, obligations. while it merely recommends the latter as a means of winning a higher celestial reward. The popular view, as expressed in the actual practice, admits a difiference in the degree of obedience which is to be paid to