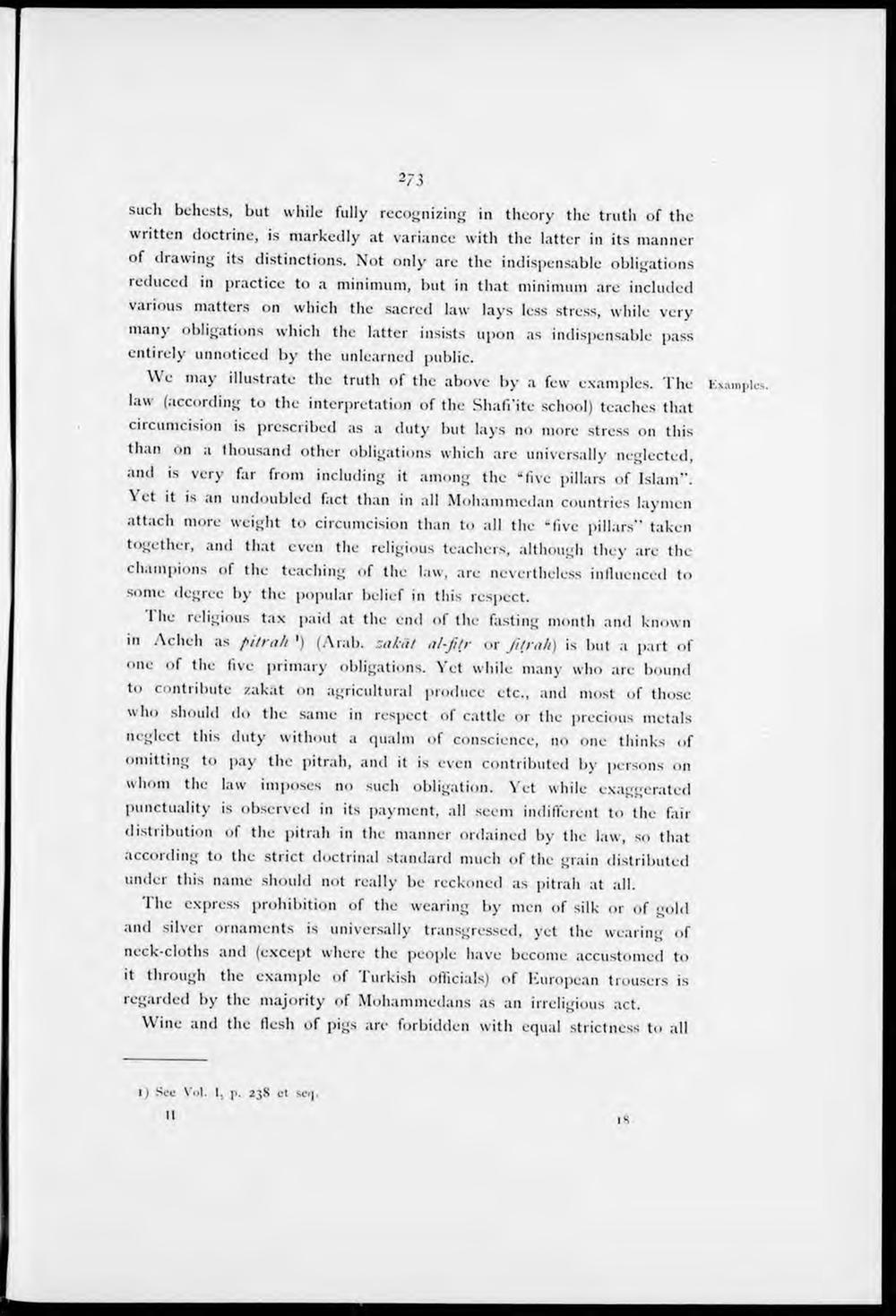 sucli behcsts, but while fully recognizing in theory thc truth of thc \vritten doctrine, is markedly at variance with the latter in its nianner of drawing its distinctions. Not only are the indispensable obligations reduced in practice to a minimum, but in that minimum are includcd various matters on which the sacred law lays less stress, while very many obligations which thc latter insists upon as indispensable pass entirely unnoticed by the unlearned public.

We may illustrate thc truth of the above by a few examples. The Kxamplcs. law (according to the interpretation of the Shafi'ite school) teaches that circumcision is prescribed as a duty but lays no more stress on this than on a thousand other obligations which are univcrsally neglected,

and is very far from including it among the "five pillars of Islam".

\ et it is an undoubled fact than in all Mohammcdan countries laymcn attach more weight to circumcision than to all the "five pillars" taken together, and that even the religious teachers, although they are the ch.unpions of thc teaching of the law, are ncvertheless influenced to some degree by the popular belief in this respect.

1 hc religious tax paid at the end of the fasting nionth and known in Acheh as pitrah ') (Arab. zakat al-fitr or fitrali) is but a part of onc of the five primary obligations. Yet while many who are bound to contribute zakat on agricultural producc etc., and most of those who should do the sanic in respect of cattle or the precious metais neglect this duty without a qualm of conscicnce, 110 one thinks of oniitting to pay the pitrah, and it is even contributed by persons on whom thc law imposes no sucli obligation. Yet while exaggeratcd punctuality is observed in its payment, all seem indifferent to thc fair distribution of the pitrah in the nianner ordained by the law, so that according to the strict doctrinal Standard mucli of the grain distributed undcr this name should not rcally be rcckoned as pitrah at all.

The express prohibition of the wearing by men of silk or of gold and silver ornaments is univcrsally transgressed, yet the wearing of neck-cloths and (except where the people have bccome accustomcd to it through the cxiiniplc of I urkish ofiicials) of Luropean trousers is reg.11 ded by the majority of Mohammedans as an irreligious act.