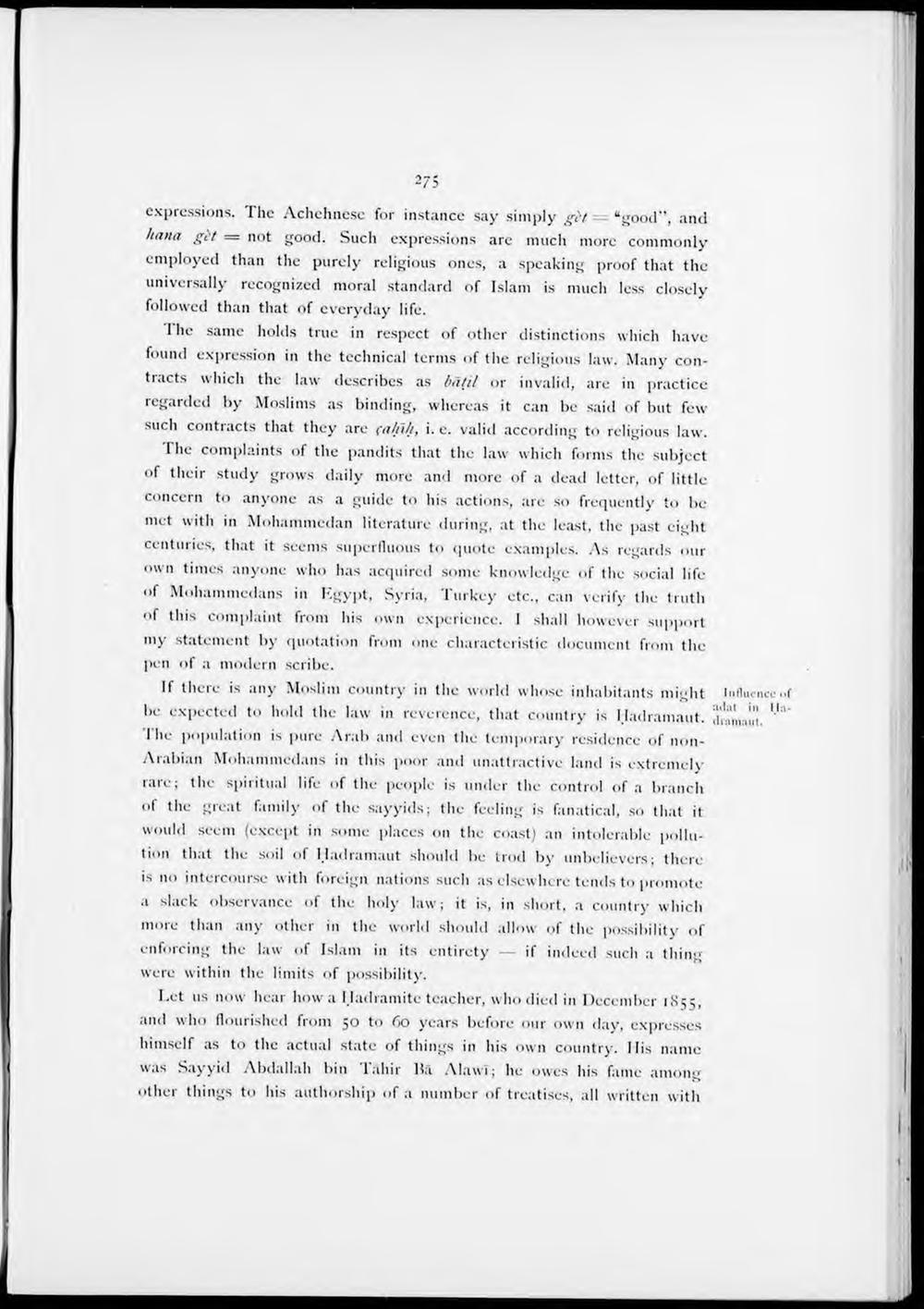 expressions. The Achehnesc for instance say simply get — "good", and hana get — not good. Such expressions are much more commonly employed than the purely religious ones, a speaking proof that the universally recognized moral Standard of Islam is much less closely followed than that of everyday life.

Ihe same holds truc in respect of other distinctions which have found expression in the technical terms of the religious law. Many conti acts which the law describes as biïtil or invalid, are in practice regardcd by Moslims as binding, whereas it can be said of but few such contracts that they are (a/nk, i. e. valid according to religious law.

I he complaints of the pandits that the law which forms the subject of their study grows daily more and more of a dead letter, of little concern to anyone as a guide to his actions, are so frequently to be met with in Mohammedan literature during, at the least, the past eight centuries, that it seems superfluous to quote examples. As regards our own times anyone who lias acquircd some knowledge of the social life of Mohammedans in Egypt, Syria, Turkey etc., can verify the truth of tliis complaint from his own experience. I shall however support my statement by quotation from one characteristic document from the pen of a modern scribe.

If therc is any Moslim country in the world whose inhabitants might Influcnceof be expected to hold the law in revcrence, that country is Hadramaut. d,™aut. The population is pure Arab and even the temporary residence of 11011Arabian Mohammedans in tliis poor and unattractive land is extremely rare; the spiiitual life of the people is under the control of a branch of the great family of the sayyids; the feeling is fanatical, so that it would secm (except in some places 011 the coast) an intolerable pollution that the soil of Hadramaut sliould be trod by unbelievers; there is 110 intercourse with foreign nations such as elsewhere tends to promote a slack observaiice of the lioly law; it is, in short, a country which more than any other in the world sliould allow of the possibility of enforcing the law of Islam in its entirety — if indeed such a tliing were within the limits of possibility.

Let us 11 ovv hear how a Hadramite teacher, who died in December 1855,

and who flourished from 50 to 60 years before our own day, expresses himself as to the actual state of tliings in his own country. His name was Sayyid Abdallah bin laliir Ha Alawl; he owes his fame among other tliings to his authorship of a number of treatises, all written with