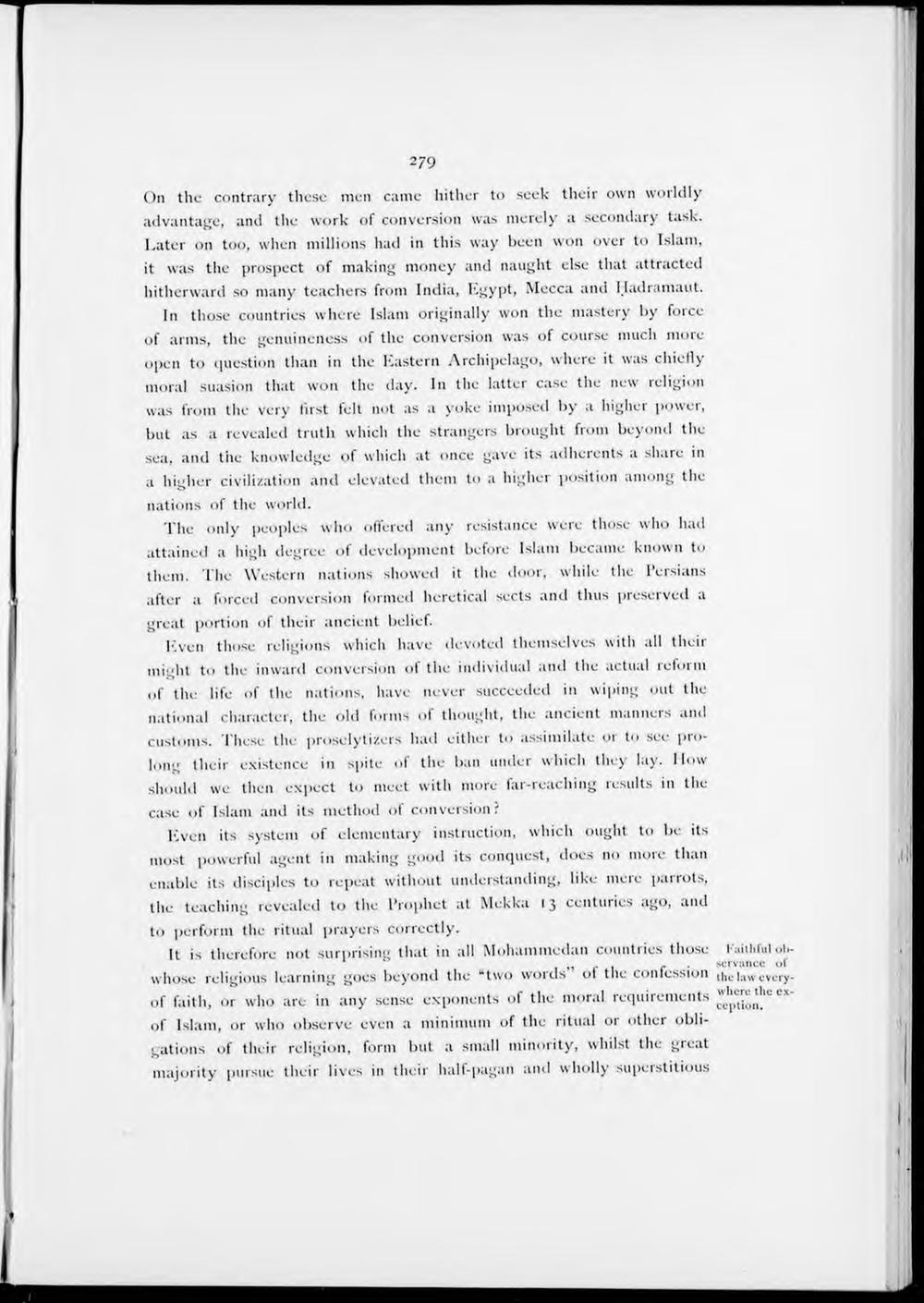 On the contrary these men came hither to seek their own worldly advantage, and the work of conversion was merely a secondary task.

Later on too, when millions had in this way been won over to Islam,

it was the prospect of making money and naught else that attracted hitherward so many teachers from India, Egypt, Mecca and Hadramaut.

In those countries where Islam originally won the mastery by force of arms, the genuineness of the conversion was of course much more open to question than in the Eastern Archipelago, where it was chiefly moral suasion that won the day. In the latter case the new religion was from the very first feit not as a yoke imposed by a higher power,

but as a revcaled truth which the strangers brought from beyond the sea, and the knowledge of which at once gave its adherents a share in a higher civilization and elevated them to a higher position among the nations of the world.

The only peoples who offered any resistance were those who had attained a high degree of development before Islam became known to them. The Western nations showed it the door, while the 1'ersians after a forced conversion formeel heretical sects and thus preserved a great portion of their ancient belief.

Even those religious which have devoted themselves with all their might to the inward conversion of the individual and the actual reform of the life of the nations, have never succeeded in wiping out the national character, the old forms of thought, the ancient manners and customs. 1'hese the proselytizers had either to assimilate 01 to see prolong their existence in spite of the ban under which tliey lay. IIow should we then expect to meet with more far-reaching results in the case of Islam and its method of conversion r

Even its system of elementary instruction, which ought to be its most powerful agent in making good its conquest, does 110 more than enable its disciples to repeat without understanding, like mere parrots, the teaching revealed to the 1'rophet at Mekka 13 centuries ago, and to perform the ritual prayers correctly.

whosc religious learnint^ gocs beyond the tttwo words ot tlic coiitession the law every of faith, or who are in any sense exponents of the moral requirements ex

of Islam, or who observe even a minimum of the ritual or otlicr obligations of their religion, form but a small minority, whilst the great majority pursue their lives in their half-pagan and wholly superstitious