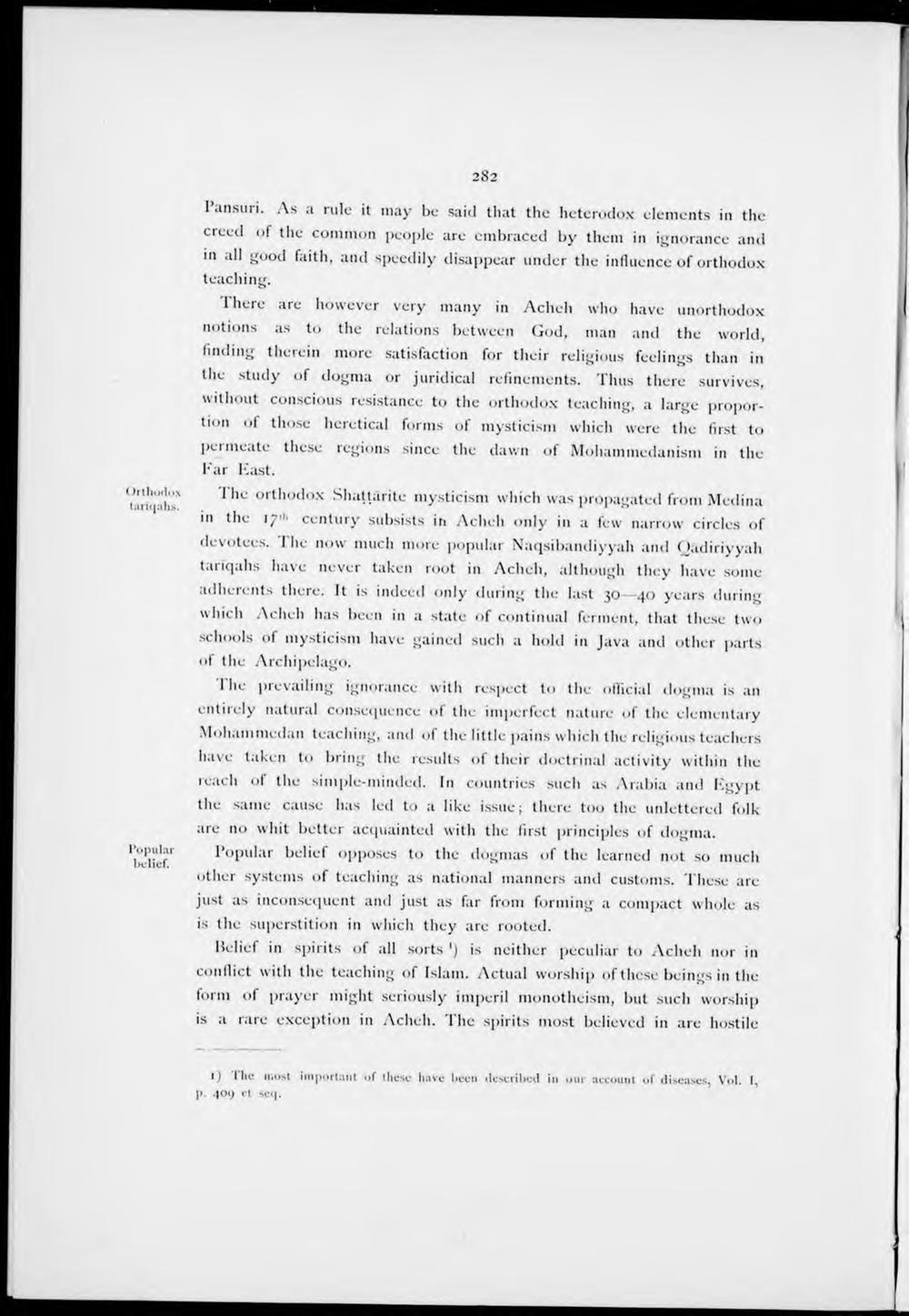 Pansuri. As a rule it may be said that the heterodox clements in the creed of the common people are embraced by them in ignorance and in all good faith, and speedily disappear under the influence of orthodox teaching.

Fhere are however very many in Acheh who have unorthodox notions as to the relations between God, man and the world, linding therein more satisfaction for their religious feelings than in the study of dogma or juridical refinements. Tlius there survives, without conscious resistance to the orthodox teaching, a large proportion of tliose heretical forms of mysticism which were the first to peimeate these regions since the dawn of Mohammedanism in the F ar Kast.

rhe orthodox Shattaritc mysticism which was propagated from Medina in the 1711' century subsists in Acheh only in a few narrow circles of devotees. The now much more popular Naqsibandiyyah and Oadiriyyah tarïqahs have never taken root in Acheh, although they have some adherents there. It is indeed only during the last 30—40 years during which Acheh has been in a state of continual ferment, that these two schools of mysticism have gained such a hold in Java and other parts of the Archipelago.

1 he prevailing ignorance with respect to the official dogma is an entirely natural consequence of the imperfect nature of the elementary Mohammedan teaching, and of the little pains which the religious teachers have taken to bring the results of their doctrinal activity within the reach ot the simple-minded. In countries such as Arabia and Egypt the same cause lias led to a like issue; there too the unlettered folk are no whit better acquainted with the first principles of dogma.

Popular belief opposes to the dogmas of the learned not so much other systems of teaching as national manners and customs. These are just as inconsequent and just as far from forming a compact whole as is the superstition in which they are rooted.

Belief in spirits of all sorts ') is neither peculiar to Acheh nor in conflict with the teaching of Islam. Actual worship of these beings in the form of prayer might seriously imperil monotheism, but such worship is a rare exception in Acheh. The spirits most believed in are hostile

1) 1 he ïiiusl important of these have heen described in uur aecounl of diseases, Vol. I,