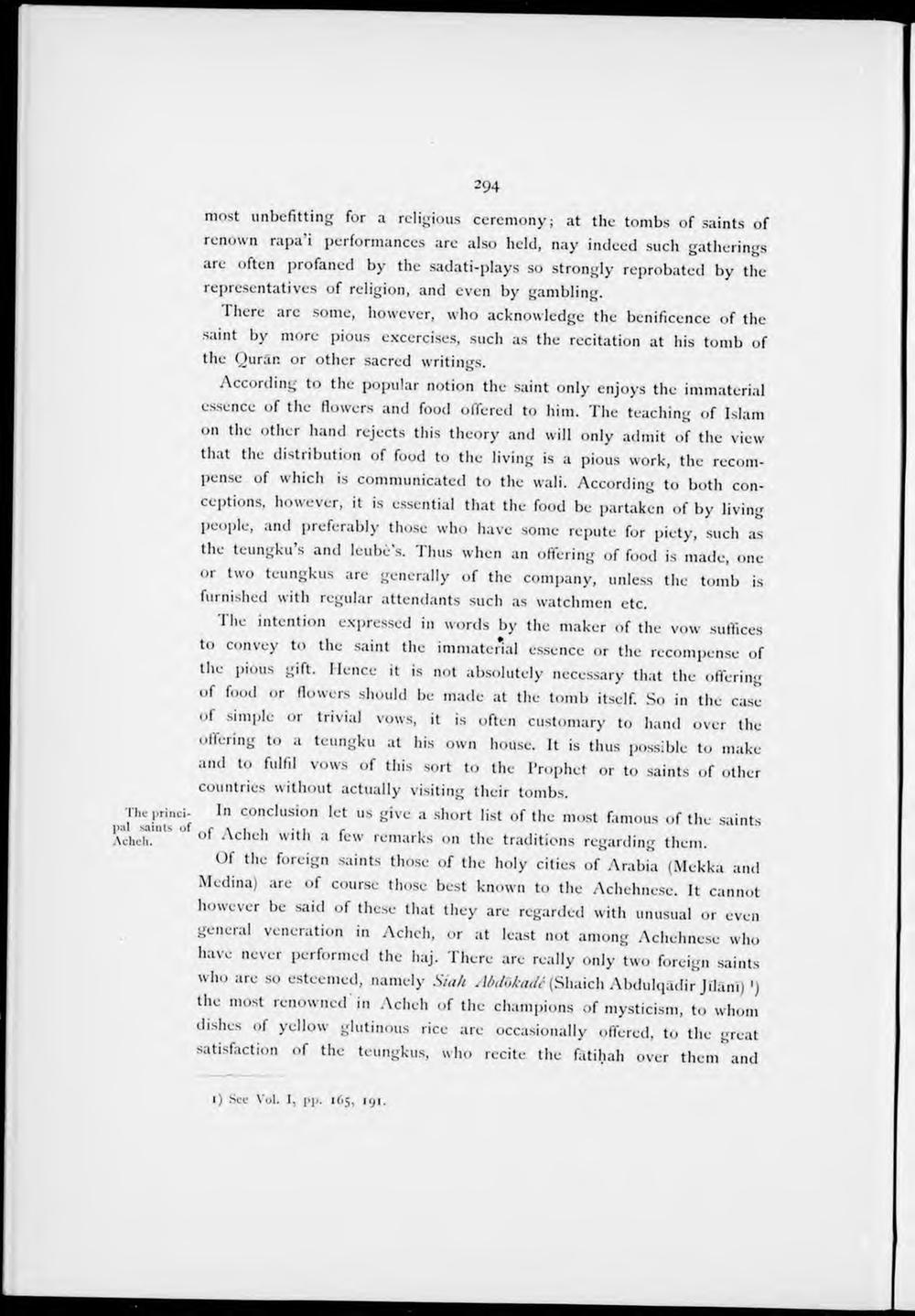 most unbefitting for a religious cercmony; at the tombs of saints of renow n rapa i performances are also held, nay indeed such gatherings are often profancd by the sadati-plays so strongly reprobated by the representatives of religion, and even by gambling.

Tliere are some, however, who acknowledge the benificence of the saint by more pious excercises, such as the recitation at his tomb of the Qurar. or other sacred writings.

According to the popular notion the saint only enjoys the immaterial essence of the flowers and food offered to him. The teaching of Islam on the other hand rejects this theory and will only admit of the view that the distribution of food to the living is a pious work, the recompense of which is communicated to the wali. According to both conceptions, however, it is essential that the food be partaken of by living people, and preferably those who have some repute for piety, such as the teungku s and leubè s. 1 hus when an offering of food is made, one or two teungkus are generally of the company, unless the tomb is furnishcd with regular attendants such as watchmen etc.

The intention expressed in words by the maker of the vow suffices to convey to the saint the immaterial essence or the recompense of the pious gift. Ilence it is not absolutely necessary that the offering of food or flowers should be made at the tomb itself. So in the case of simple or trivial vows, it is often customary to hand over the offering to a teungku at his own house. It is thus possible to make and to fulfil vows of this sort to the Prophet or to saints of other countries without actually visiting thcir tombs.

Acheh. ot Ache" wJtJi a few remarks on the traditions regarding them.

Of the foreign saints those of the lioly cities of Arabia (Mekka and Medina) are of course those best known to the Achehnese. It cannot however be said of these that they are regarded with unusual or even general veneration in Acheh, or at least not among Achehnese who have never performed the haj. Tliere are really only two foreign saints who are so esteemed, namely Siah Abdökadé (Shaich Abdulqadir Jïlanï) ') the most renowned 111 Acheh of the champions of mysticism, to whoni dishes of yellow glutinous rice are occasionally offered, to the great satisfaction of the teungkus, who recite the fatihah over them and