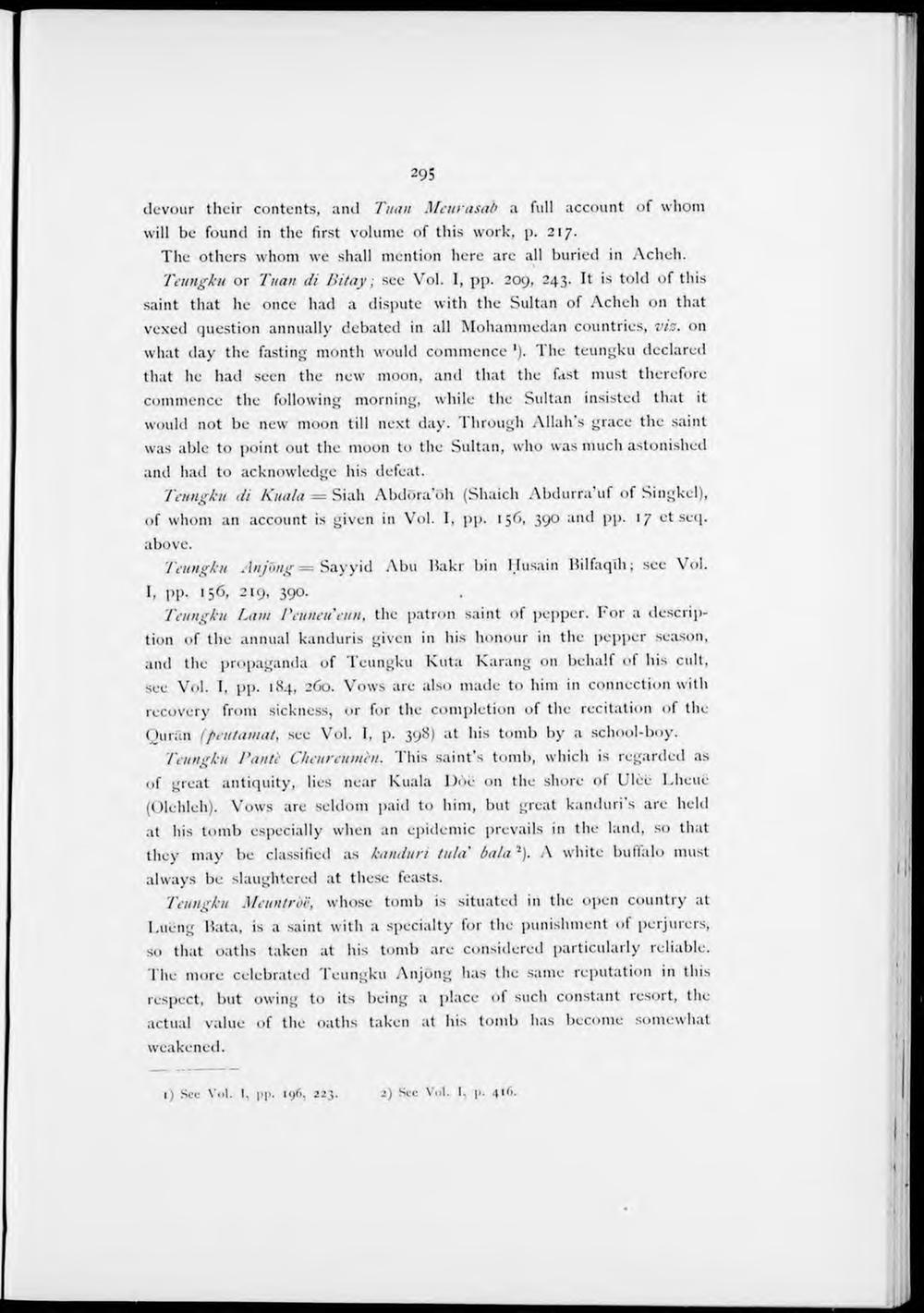 devour their contents, and Tuan Meurasab a full account of whom will be found in the first volume of this work, p. 217.

The others whom we sliall mention here are all buried in Acheh.

Teungku or Titan di Bitay; see Vol. I, pp. 209, 243. It is told of this saint that he once had a dispute with the Sultan of Acheh 011 that vexed question annually debated in all Mohammedan countries, vis. on wluit day the fasting month would commence '). The teungku declared that he had seen the new moon, and that the fast must therefore commence the following morning, while the Sultan insisted that it would not be new moon till next day. Through Allah's grace the saint was able to point out the moon to the Sultan, who was much astonished and had to acknowledge his defeat.

Teungku Lam Peuneueun, the patron saint of pepper. For a description of the annual kanduris given in his honour in the pepper season, and the propaganda of Teungku Kuta Karang on behalf of his cult, see Vol. I, pp. 184, 260. Vows are also made to him in connection with recovery from sickness, or for the completion of the recitation of the Ouran (peutamat, see Vol. I, p. 398) at his tomb by a school-boy.

Teungku Tante Cheureumèn. This saint's tomb, which is regarded as of great antiquity, lies near Kuala Dóë on the shore of Ulèë Lheuë (Olehleh). Vows are seldom paid to him, but great kanduri's are held at his tomb especially when an epidemie prevails in the land, so that they may be classified as kanduri tula ba/a 2). A white buffalo must always be slaughtcred at these feasts.

Teungku Aleuntrbë, whose tomb is situated in the open country at Luëng Bata, is a saint with a specialty for the punishment of perjurers, so that oaths taken at his tomb are considered particularly reliable. The more celebrated Teungku Anjöng lias the same reputation in this respect, but owing to its being a place of such constant resort, the actual value of the oaths taken at his tomb lias become somewhat weakened.