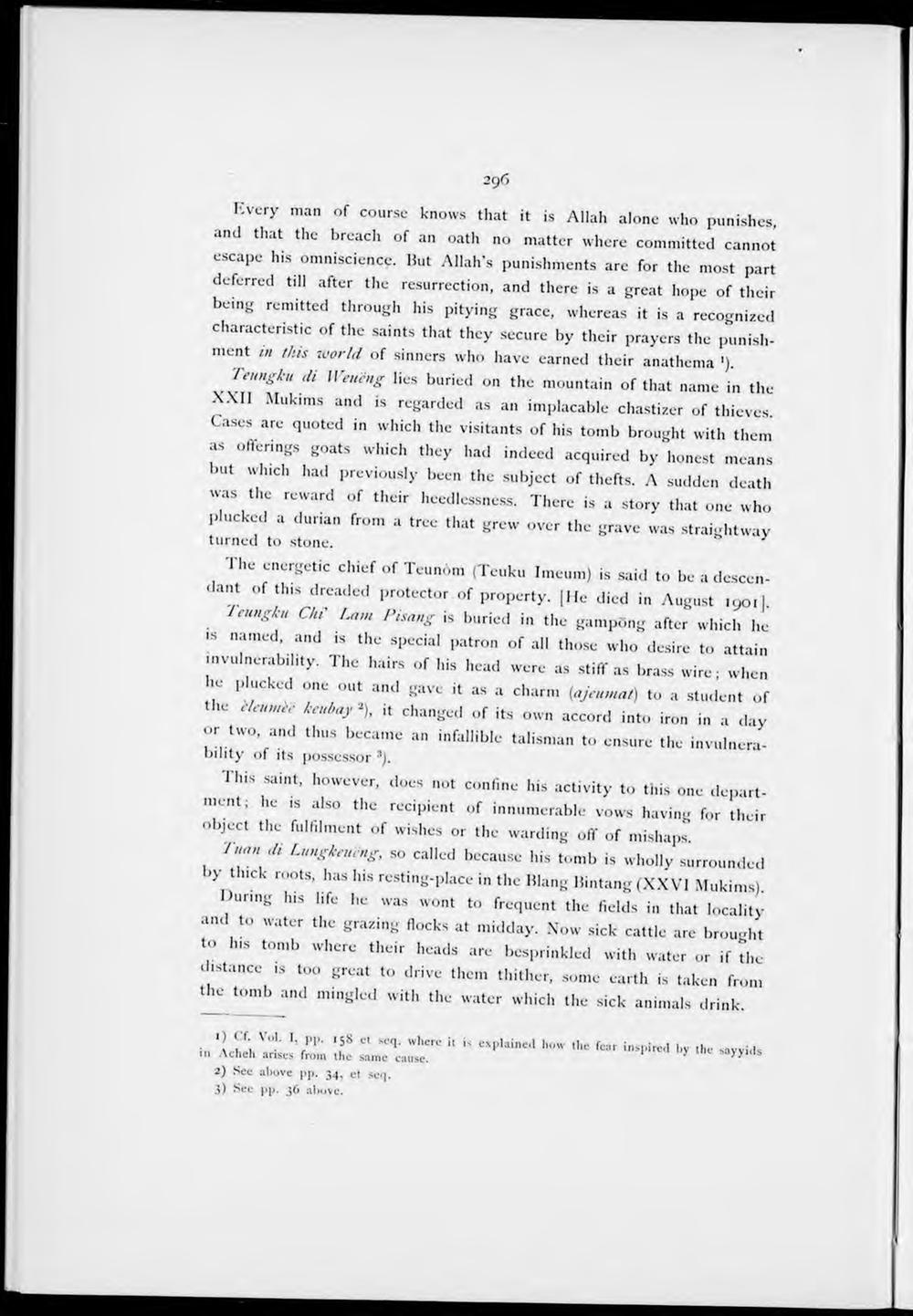 Every man of course knows that it is Allah alone who punishes,

escape his omniscience. But Allah's punishments are for the most part

deferred till after the resurrection, and tliere is a great hope of their

being remitted through his pitying grace, whereas it is a recognized

, TeunSk" dt Weuéng lies buried on the mountain of that name in the

XXII Mukims and is regarded as an implacable chastizer of thieves.

as oftcnngs goats which they had indeed acquired by honest means

n.t which had previously been the subject of thefts. A sudden death

was the reward of their heedlessness. There is a story tl,at one who

plucked a durian from a tree that grew over the grave was straightway turned to stone.

Ihe energetic chief of Teunóm (Teuku Imeum) is said to be a descendant of this dreaded protector of property. [He died in August 190.1.

eungku C/u Lam Pisang is buried in the gampöng after which he is named, and ,s the special patron of all those who desire to attain invulnerability. The hairs of his head were as stiff as brass wire; when ie plucked one out and gave it as a charm (ajeumat) to a student of the eleumee keubay »), it changed of its own accord into iron in a day

or two and thus became an infallible talisman to ensure the invulnerability of its possessor ,1).

This saint, however, does not confine his activity to this one departnient; he is also the recipient of innumerable vows having for their object the fulfilment of wishes or the warding off of mishaps

luan di Lutigkeucng, so called because his tomb is wholly surrounded >y tl.ick roots, lias lus resting-place in the Blang Bintang (XXVI Mukims) During his hfe he was wont to frequent the fields in that locality and to water the grazing flocks at midday. Now sick cattle are brought to iis tomb where their heads are besprinkled with water or if the 1 istance is too great to drive them thither, some earth is taken from the^tomb^and mingled with the water which the sick animals drink.

in Acheh ü rP1>' 'f 61 Seq' WhCrC " is exP,ained how the fcar inspire.l by the sayykis in Acheh anses from the samc cause.