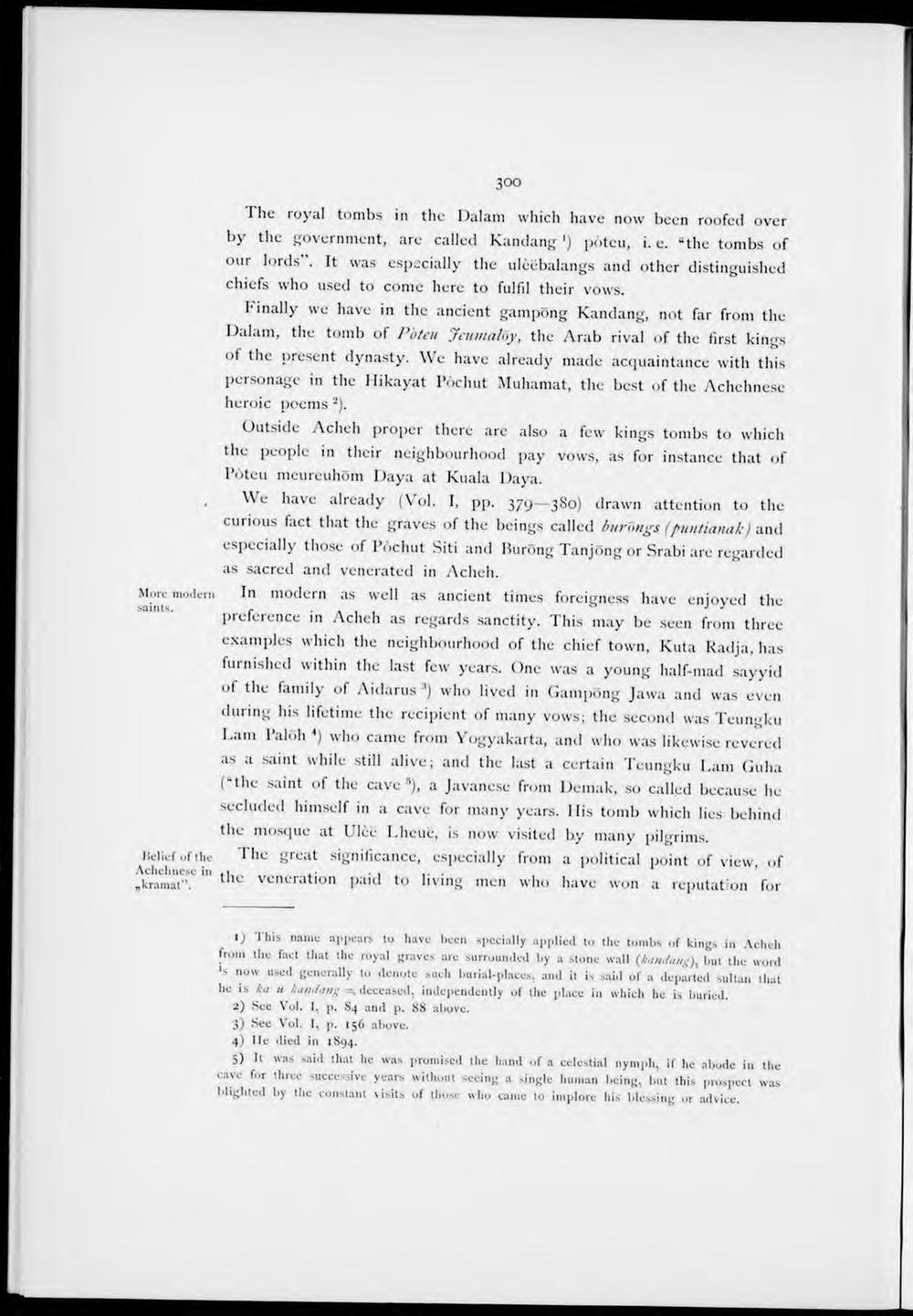 I lic royal tombs in the Dalam which have now been roofed over by the government, are called Kandang') pöteu, i. e. "the tombs of our lords . It was especially the ulèëbalangs and other distinguished chiefs who used to conie here to fulfil their vows.

Finally we have in the ancient gampöng Kandang, not far from the Dalam, the tomb of Pöteu Jeumalöy, the Arab rival of the first kings of the present dynasty. We have already made acquaintance with this personage in the Hikayat Pöchut Muhamat, the best of the Achehnese heroic poems 2).

Uutside Acheh proper there are also a few kings tombs to which the people in their neighbourhood pay vows, as for instance that of Pöteu meureuhöm Daya at Kuala Daya.

We have already (Vol. I, pp. 379—380) drawn attention to the curious fact that the graves of the beings called buróngs (puntianak) and especially those of Pöchut Siti and Buröng Tanjöng or Srabi are regarded as sacred and venerated in Acheh.

preference in Acheh as regards sanctity. This may be seen from three examples which the neighbourhood of the chief town, Kuta Radja, has furnished within the last few years. One was a young half-mad sayyid of the family of Aidarus ') who lived in Gampöng Jawa and was even during his hfetime the recipient of many vows; the second was Teungku Lam Palöh 4) who came from Yogyakarta, and who was likewise revered as a saint while still alive; and the last a certain Teungku Lam Guha ("the saint of the cave s), a Javanese from Demak, so called because he secluded himself in a cave for many years. His tomb which lies behind the mosque at Ulèë Lheuë, is now visited b.y many pilgrims.

Belief ufthe 1 he great significance, especially from a political point of view of

„kramat". tllc veneration paid to living men who have won a reputation for

1) This name appears to have been spccially applied to the tombs of kings in Acheh from the fact that the royal graves are surrounded by a stone walt (kan,tang), but the word 's now uscd gcnerally to denote such burial-places, and it is said of a departed sultan that he is ka u kandang =. deceased, independently of the place in which he is buried.

5) It was said that he was promised the hand of a celestial nymph, if he abode in the cave for three successive years without seeing a single human being, but this prospect was bliglited by tlie constant \isits of those who came to implorc his blessing ur advice.