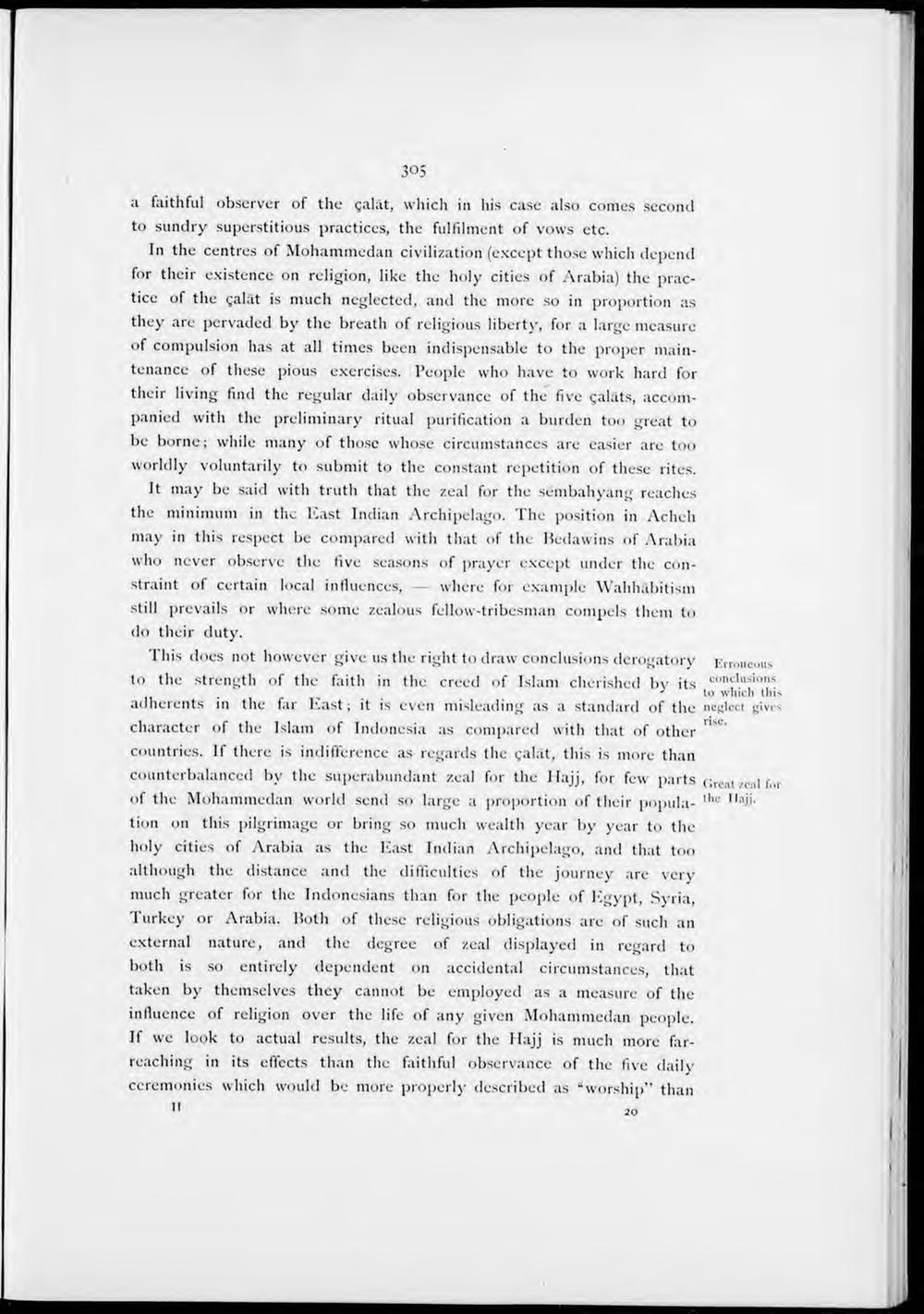 a taitiiiul observer ot the gakit, which 111 his casc also comes second to sundry superstitious practices, the fulfilment of vows etc.

In the centres of Mohammedan civilization (except those which depcnd for their existence on religion, like the holy cities of Arabia) the practice of the galat is much neglected, and the more so in proportion as they are pervaded by the breath of religious liberty, for a large measurc of compulsion lias at all times been indispensable to the proper maintenance of these pious exercises. People who have to vvork hard for their living find the regular daily observance of the five galats, accompanied with the preliminary ritual purification a burden too great to be borne; while many of those whose circumstances are easier are too worldly voluntarily to submit to the constant repetition of these rites.

It may be said with truth tliat the zeal for the sembahyang reaches the minimum in the Kast Indian Archipelago. The position in Acheh may in this respect be compared with that of the Hedawins of Arabia who never observe the five seasons of prayer except under the constraint of certain local influences, — where for example Wahhabitism still prevails or where sorne zealous fellow-tribesman compels them to do their duty.

J " to which this

adherents in the far Kast; it is even misleading as a Standard of the ne^lcct nivis character of the Islam of Indonesia as compared with that of other ' L countries. If there is indiflference as regards the galat, this is more than counterbalanced by the superabundant zeal for the Hajj, for few parts Great zeal (m of the Mohammedan world send so large a proportion of their popula- 1,10 tion on this pilgrimage or bring so much wealth year by year to the holy cities of Arabia as the Kast Indian Archipelago, and that too although the distance and the difficulties of the journey are very much greater for the Indonesians than for the people of Kgypt, Syria,

lurkey or Arabia. Botli of these religious obligations are of such an external nature, and the degree of zeal displayed in regard to both is so entirely dependent on accidental circumstances, that taken by themselves they cannot be employed as a measure of the influence of religion over the life of any given Mohammedan people.

If we look to actual results, the zeal for the Hajj is much more farreaching in its effects than the faithful observance of the five daily ceremonies which would be more properly described as "worship" than