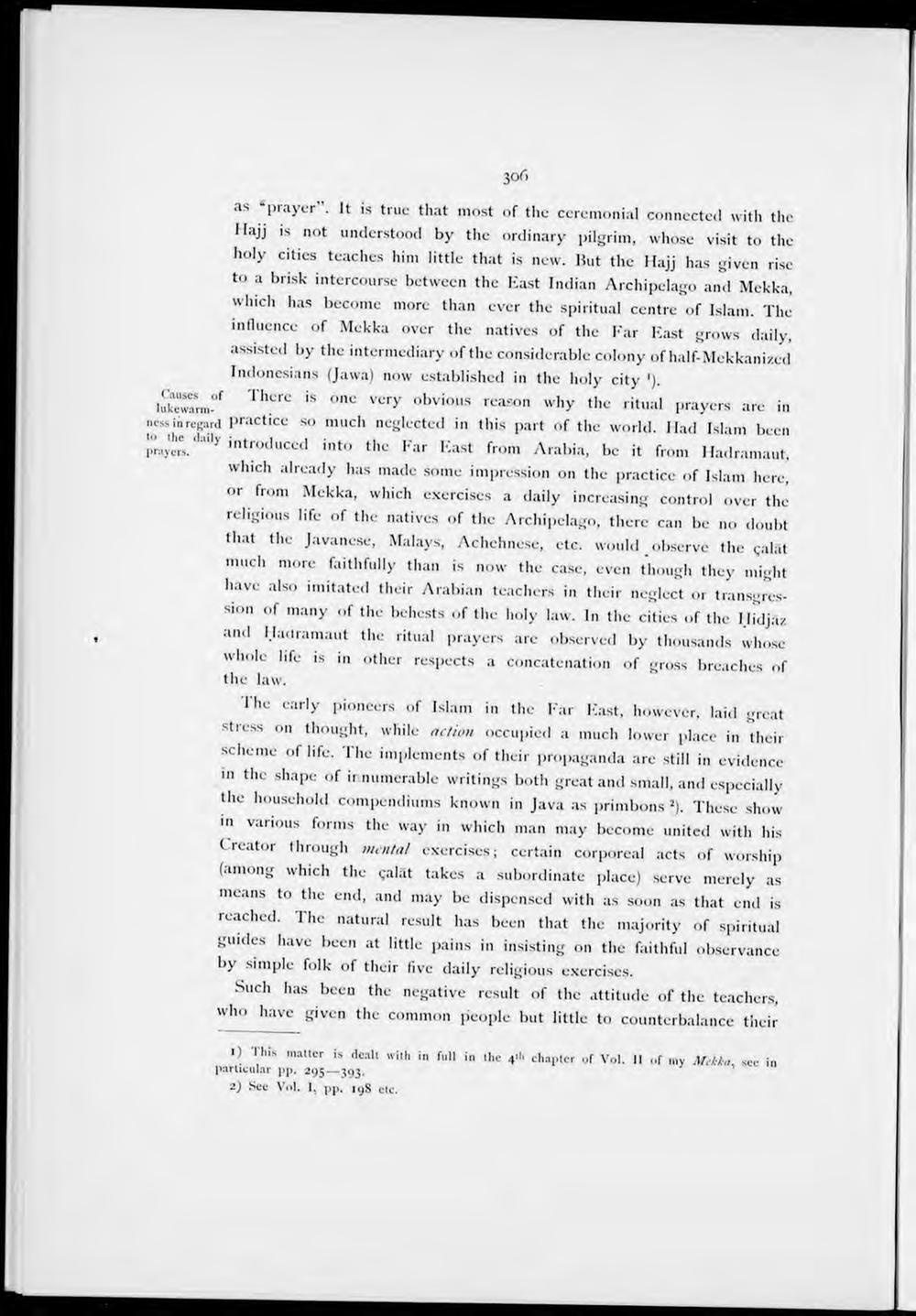 as prayer . Jt is truc that most of the cercmonial connected with the Hajj is not understood by the ordinary pilgrim, whose visit to the holy cities teaches him little that is new. Hut the Hajj has given rise to a brisk intercourse between the Kast Indian Archipelago and Mekka, which has become more than ever the spiritual centre of Islam. The influence of Mekka over the natives of the Kar Kast grows daily, assisted by the mtermediary of the considerable colony of half-Mekkanized Indonesians (Jawa) now established in the holy city ').

lukewaSrm-°f TherC 'S °"C vcry obvious rcason vvhy the ritual prayers are in ness inregard practicc so much neglected in this part of the world. Had Islam been praycTs. introduced into the Kar Kast from Arabia, be it from Hadramaut, which already has made some impression 011 the practicc of Islam here, or from Mekka, which exercises a daily increasing control over the religious life of the natives of the Archipelago, there can be no doubt that the Javanese, Malays, Achehnese, etc. would observe the galat much more faithfully than is now the case, even though they might have also imitated their Arabian teachers in their neglect or transgression of many of the behests «,f the holy law. In the cities of the Hidjaz and Hadramaut the ritual prayers are observed by thousands whose

whole I'fe is in other respects a concatenation of gross breaches of the law.

1 he early pioneers of Islam in the Kar Kast, however, laid great stress 011 thought, vvhile action occupied a much lower place in their scheme of life. The implements of their propaganda are still in evidence m the shape of ir numerable writings botli great and small, and especially the household compendiums known in Java as primbons J). These show in various forms the way in which man may become united with his ( reator through mental exercises; certain corporeal acts of worship (among which the galat takes a subordinate place) serve merely as means to the end, and may be dispensed with as soon as that end is reached. The natural result has been that the majority of spiritual guides have been at little pains in insisting on the faithful observance by simple folk of their five daily religious exercises.

Such has been the negative result of the attitude of the teachers, who have given the common people but little to counterbalance their