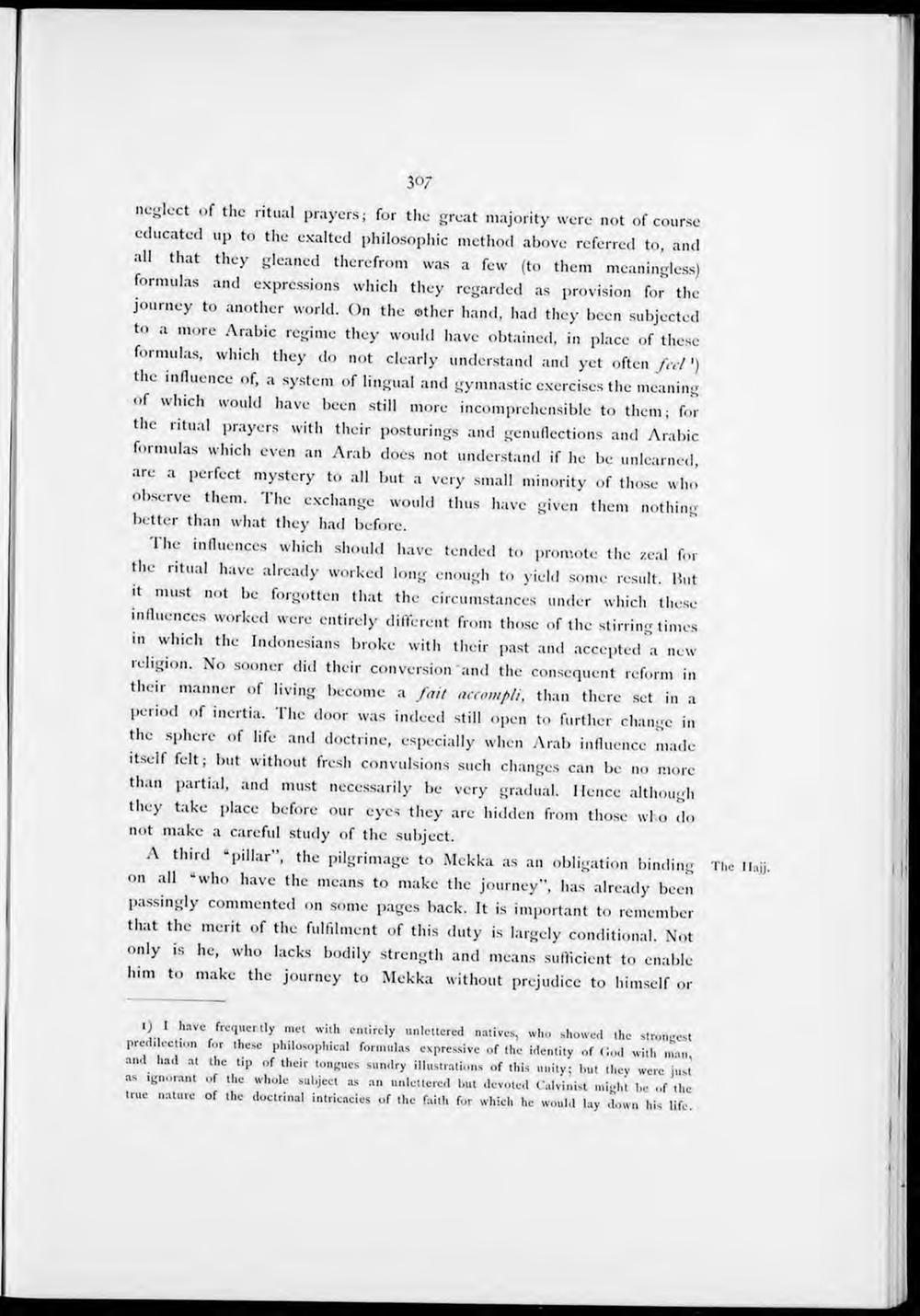 neglect of the ritual prayers; for the great majority were not of course educated up to the exalted philosophic method above referred to, and all that they gleaned therefrom was a few (to them meaningless)

formulas and expressions which they regarded as provision for the journey to another world. On the ether hand, had they been subjected to a more Arabic regime they would have obtained, in place of these formulas, which they do not clearly understa.ul and yet often fcel') the influence of, a system of lingual and gymnastic exercises the meaning of which would have been still more incomprehensible to them; for the ritual prayers with their posturings and genuflections and Arabic formulas which even an Arab does not understand if he be unlearned,

are a perfect mystery to all but a very small minority of those who observe them. The exchange would thus have given them nothing better than what they had before.

Ihc influences which should have tended to promote the zeal for the ritual have already worked long enough to yield some result. Hut it must not be forgotten that the circumstances under which these influences worked were entirely different from those of the stirring times in which the Indonesians broke with their past and accepted a new religion. No sooner did their conversion and the consequent reform in their manner of living become a fait accompli, than there set in a period of inertia. The door was indeed still open to further change in the sphere of life and doctrine, especially when Arab influence made itse'f fcIt! b"t without fresh convulsions such changes can be no more than partial, and must necessarily be very gradual. Hence although they take place before our eyes they are hidden from those wlo do not make a, céircful study of the subject.

A third "pillar", the pilgrimage to Mekka as an obligation binding The Hajj. on all "who have the means to make the journey", has already been passingly commented on some pages back. It is important to remember that the merit of the fulfilment of this duty is largely conditional. Not °nly ls he, who lacks bodily strength and means sufficiënt to enablc 'iim to make the journey to Mekka without prejudice to himself or

0 1 have frequer tly met with entirely unlettered natives, who showed the stronirest pred.lection for these philosophical formulas expressive of the identity of God with man and had at the tip of their tongues sundry illustrations of this unity; but they were iust as .gnorant of the whole subject as an unlettered but devoted Calvinist might be of the true nature of the doctrinal intricacies of the faith for which he would lay down his life.