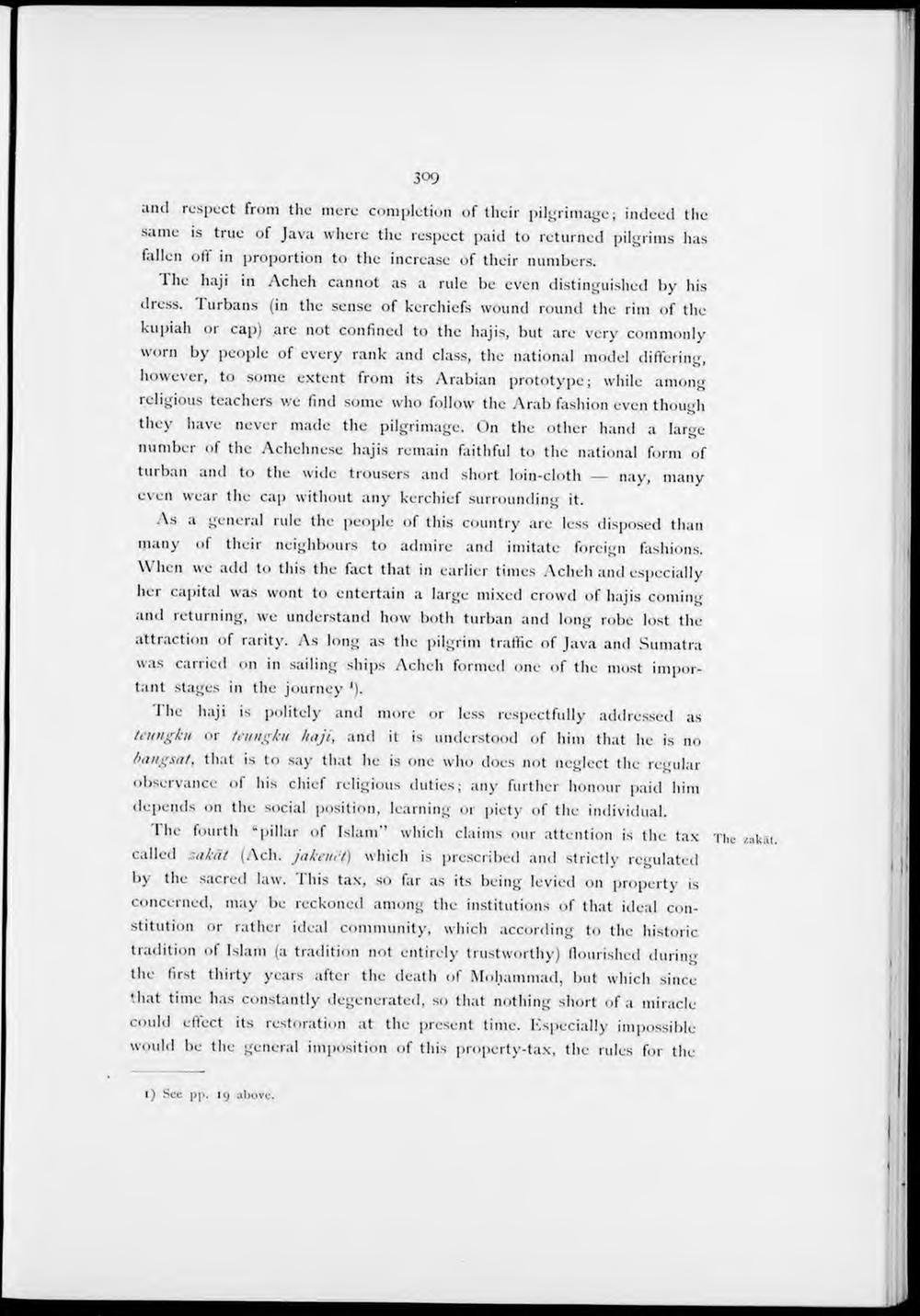 and respect from the merc completion of their pilgrimage; indeed tlie same is true of Java where the respect paid to returned pilgrims has fallen off in proportion to the increase of their numbers.

The haji in Acheh cannot as a rule be even distinguished by his dress. Turbans (in the sense of kerchiefs vvound round the rim of the kupiah or cap) are not confined to the hajis, but are very cornmonly worn by people of every rank and class, the national model differing,

however, to some extent from its Arabian prototype; while among rcligious teachers v/e find some who follow the Arab fashion even though tiiey have liever made the pilgrimage. On the other hand a large number of the Achehnese hajis remain faithful to the national form of turban and to the wide trousers and short loin-cloth — nay, many even wear the cap without any kerchief surrounding it.

As a general rule the people of tliis country are less disposed than many of their neighbours to admire and imitate foreign fashions.

Wlien we add to tliis the fact that in earlier times Acheh and especially her capital was wont to entertain a large mixed crowd of hajis coming and returning, we understand how both turban and long robe lost the attraction of rarity. As long as the pilgrim traffic of Java and Sumatra was carried on in sailing ships Acheh formed one of the most important stages in the journey ').

The haji is politely and more or less respectfully addressed as teungku or teungku haji, and it is understood of him that he is no batigsat, that is to say that he is one who does not neglect the regular observance of his chief religious duties; any flirther honour paid him depends on the social position, learning or piety of the individual.

The fourth "piHar of Islam" which claims our attention is the tax The zakat. called zakat (Ach. jakeuït) which is prescribed and strictly regulated by the sacred law. I his tax, so far as its being levied on property is concerned, may be reckoned among the institutions of that ideal constitution or rather ideal community, which according to the historie tradition of Islam (a tradition not entirely trustworthy) flourished during the first thirty years after the death of Mohammad, but which since that time has constantly degenerated, so that nothing short of a miracle could effect its restoration at the present time. Especially impossible would be the general imposition of tliis property-tax, the rules for the