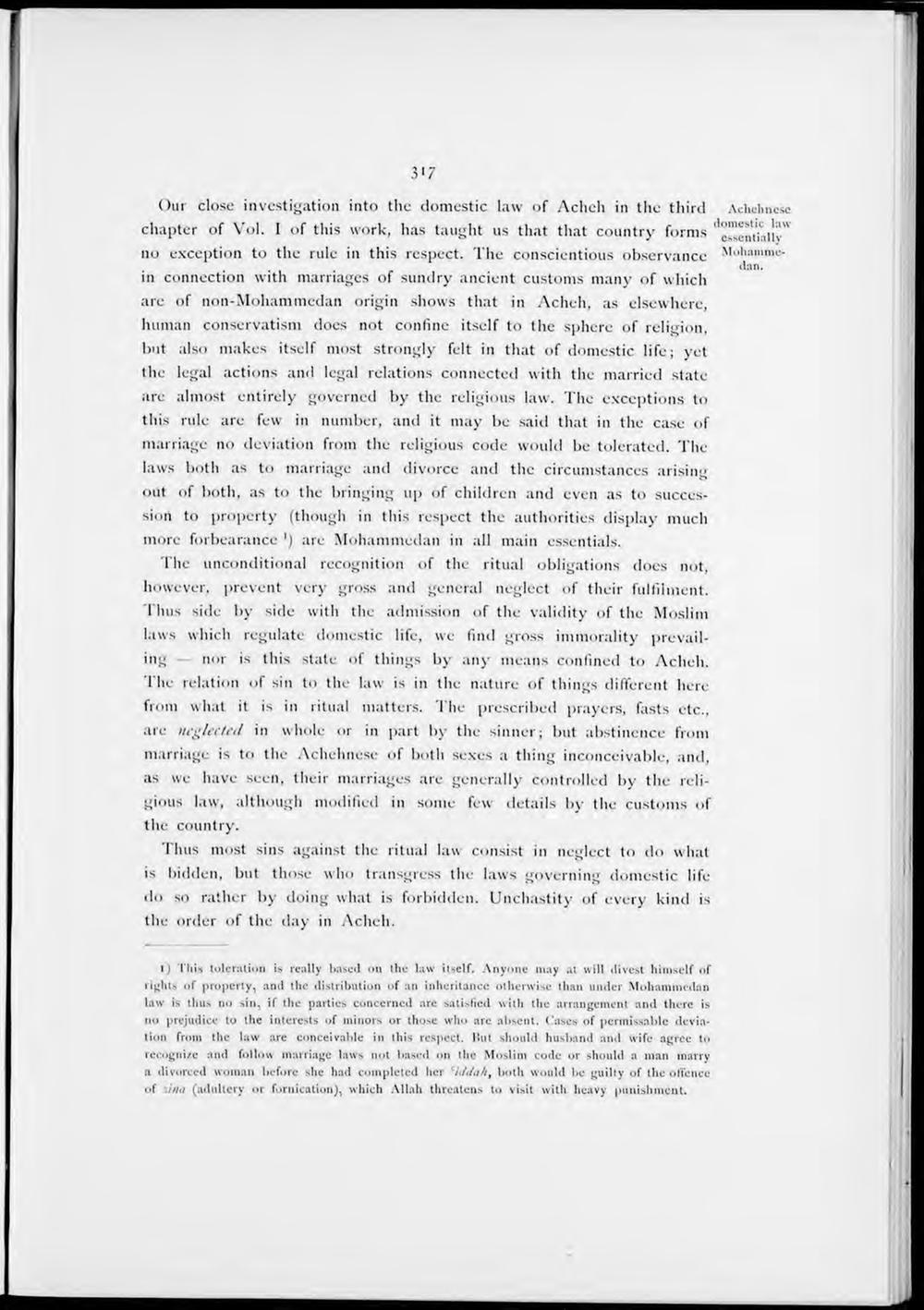 Our close investigation into the domestic law of Achch in the third Achelmcse chapter of Vol. I of this work, has taught us that that country forms ''c^ent'ially" no exception to the rule in this respect. The conscientious observance >Iohammü-

in connection with marriages of sundry ancient customs many of which are of non-Mohammcdan origin shows that in Acheh, as elsewhere,

hitman conservatism does not confine itself to the sphere of religion,

but also makes itself most strongly feit in that of domestic life; yet the legal actions and legal relations connected with the married state are almost entirely governed by the religious law. The exceptions to this rule are few in nuniber, and it may be saitl that in the case of marriage no deviation from the religious code would be tolerated. The laws both as to marriage and divorce and the circumstances arising out of both, as to the bringing up of children and even as to succession to property (though in this respect the authorities display much more forbearance ') are Mohammedan in all main essentials.

The unconditional recognition of the ritual obligations does not,

however, prevent very gross and general neglect of their fulfilment.

Thus side by side with the admission of the validity of the Moslim laws which regulate domestic life, we find gross immorality prevailing — nor is this state of things by any means confined to Acheh. The relation of sin to the law is in the nature of things different here from what it is in ritual matters. The prescribed prayers, fasts etc., are ncglected in whole or in part by the sinner; but abstinence from marriage is to the Achehnese of both sexes a thing inconceivable, and,

as we have seen, their marriages are generally controlled by the religious law, although modified in some few details by the customs of the country.

Thus most sins against the ritual law consist in neglect to do what is bidden, but those who transgress the laws governing domestic life do so rather by doing what is forbidden. Unchastity of every kind is the order of the day in Acheh.

i) This toleration is really based on the law itself. Anyone may at will divest himself of l ichts of property, and the distribution of an inheritance otherwise than under Mohammedan law is thus no sin, if the parties coneerned are satisfied with the arrangement and there is no prejudiee to the interests of minors or those who are absent. Cases of permissable deviation from the law are conceivable in this respect. But should husband and wife agree to reeognize and foliow marriage laws not based on the Moslim code or should a man marry a divoreed woman before she had completed her ciddaht both would be guilty of the olïence of zi/hi (adultery or fornication), which Allah threatens to visit with heavy punishment.