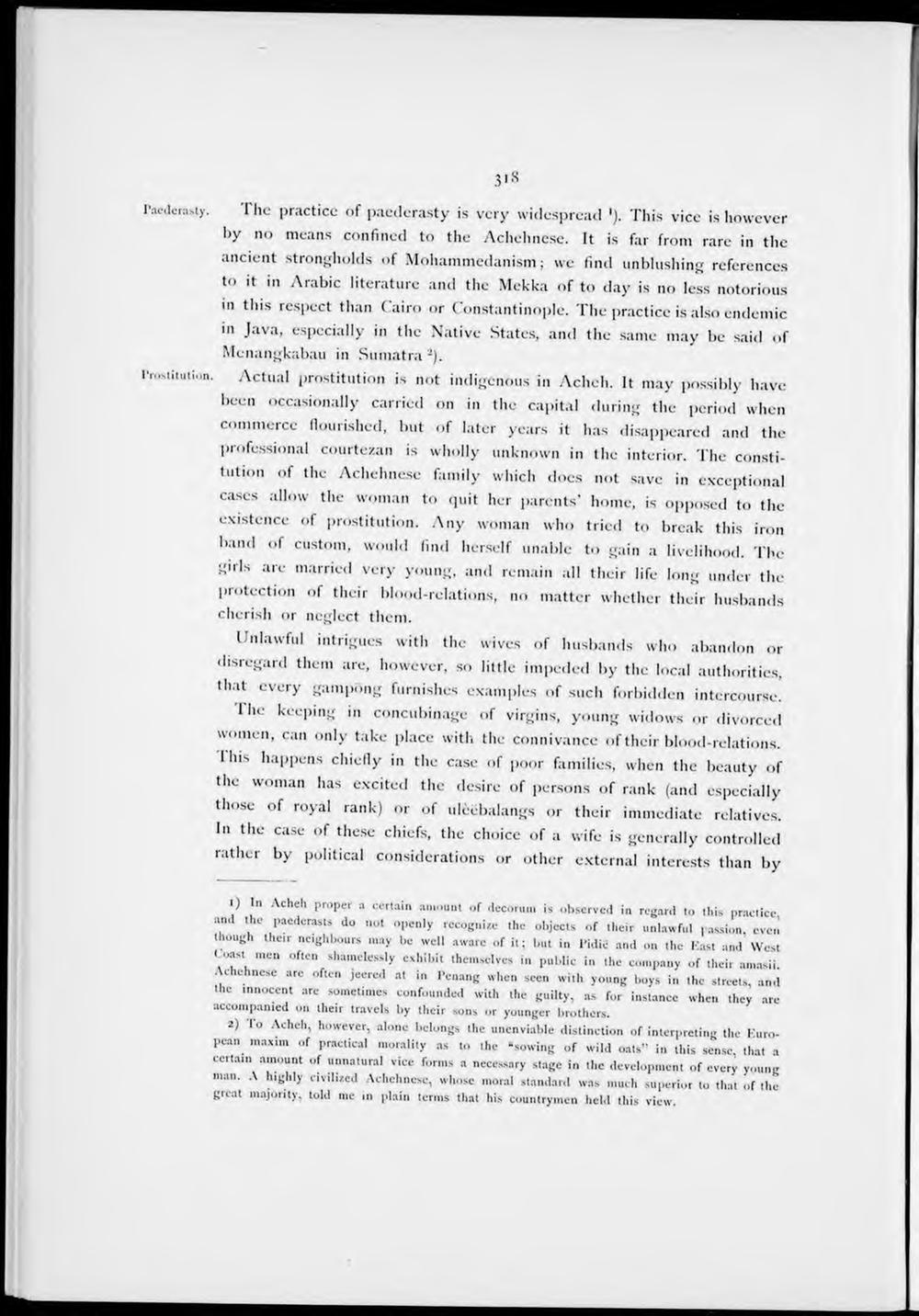 Paederasty. The practice of paederasty is vcry widesprcad '). This vicc is however by no means confined to the Achehnese. It is far from rare in the ancient strongholds of Mohammedanism; we find unblushing references to it in Arabic literature and the Mekka of to day is no less notorious in this respect than Cairo or Constantinople. The practice is also endemic in Java, espccially in the Native States, and the same may be said of Menangkabau in Sumatra 2).

Prostitution. Actual prostitution is not indigenous in Acheh. It may possibly have been occasionally carried on in the capital during the period when commerce flourished, but of later years it has disappeared and the professional courtezan is wholly unknown in the interior. The constitution of the Achehnese family which does not save in exceptional cases allow the woman to quit her parents' home, is opposed to the existence of prostitution. Any woman who tried to break this iron band of custom, would find herself unablc to gain a livelihood. The girls are married very young, and remain all their life long under the protection of their blood-relations, no matter whether their husbands cherish or neglect them.

Unlawful intrigues with the wives of husbands who abandon or disregard them are, however, so little impeded by the local authorities, that every gampöng furnishes examples of such forbidden intercourse.

Ihe keeping in concubinage of virgins, young widows or divorced women, can only take place with the connivance of their blood-relations. llns happens chiefly in the case of poor families, when the beauty of the woman has excited the desire of persons of rank (and espccially those of royal rank) or of ulèëbalangs or their immediate relatives. In the case of these chiefs, the choice of a wife is generally controlled rather by political considerations or other external interests than by

1) In Acheh proper a certain ainount of decorum is observed in regard to this practice and the paederasts do not openly recognize the objects of their unlawful rassion, even though their neighbours may be well awaie of it; but in Pidie and on the Kast and West Coast men often shamelessly exhibit themselves in public in the company of their amasii Achehnese are often jeered at in Penang when seen with young boys in the streets, and the innocent are somet.ines confounded with the guilty, as for instancc when they are acconipanied on their travels by their sons or younger brothers.

2) 1 o Acheh, however, alone belongs the unenviable distinction of interpreting the Kuropean maxim of practical morality as to the "sowing of wild oats" in this sense, that a certain amount of unnatural vice forms a necessary stage in the development of every young man. A ighly civilized Achehnese, whose moral Standard was much superior to that of the g'eat majority, told me in plain terms that his countrymen held this view.