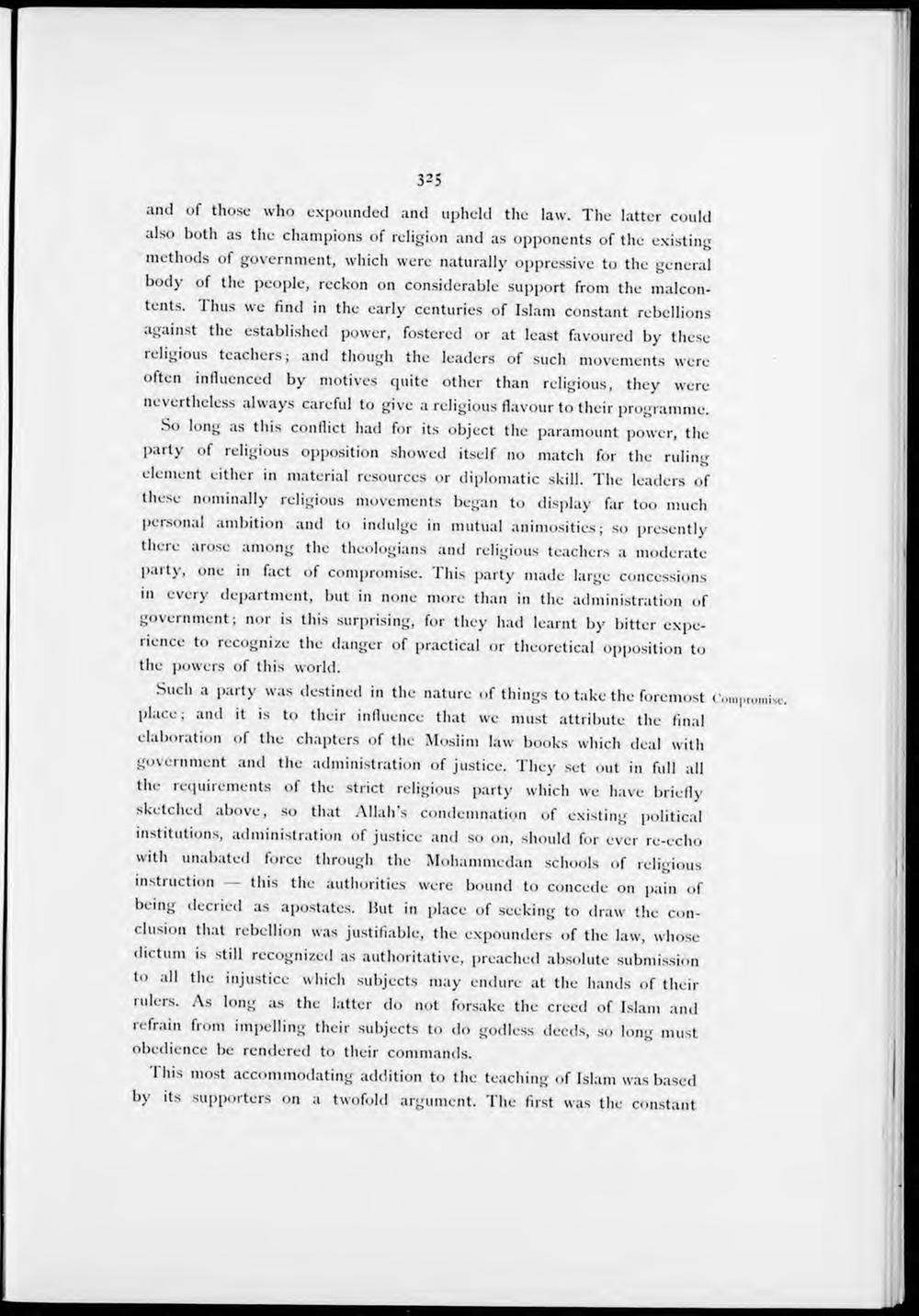 and of those who expounded and upheld the law. The latter could also both as the champions of religion and as opponents of the existing methods of government, which were naturally oppressive to the general body of the people, reckon on considerable support from the malcontents. Thus we find in the early centuries of Islam constant rebellions against the established power, fostered or at least favoured by these religious teachers; and though the leaders of such movements were often influenced by motives quite other than religious, they were nevertheless always careful to give a religious flavour to their programme.

So long as this conflict had for its object the paramount power, the party of religious opposition showed itself 110 match for the ruling element either in material resources or diplomatic skill. The leaders of these nominally religious movements began to display far too much personal ambition and to indulge in mutual animosities; so presently there arose among the theologians and religious teachers a moderate Party, one in fact of compromise. This party made large concessions in every department, but in none more than in the administration of government; nor is this surprising, for they had Iearnt by bitter experience to recognize the danger of practical or theoretical opposition to the powers of this world.

Such a party was destined in the nature of things to take the foremost Compromise. place; and it is to their influence that we must attribute the final elaboration of the chapters of the Moslim law books which deal with government and the administration of justice. They set out in full all the requirements of the strict religious party which we have briefly sketched above, so that Allah's condemnation of existing political institutions, administration of justice and so 011, should for ever re-echo with unabated force through the Mohammedan schools of religious instruction this the authorities were bound to concede 011 pain of being decried as apostates. Hut in place of seeking to draw the conclusion that rebellion was justifiable, the expounders of the law, whose dictum is still recognized as authoritative, preached absolute submission to all the injustice which subjects may endure at the hands of their rulers. As long as the latter do not forsake the creed of Islam and refrain from impelling their subjects to do godless deeds, so long must obedience be rendered to their commands.

This most accommodating addition to the teaching of Islam was based by its supporters on a twofold argument. The fust was the constant