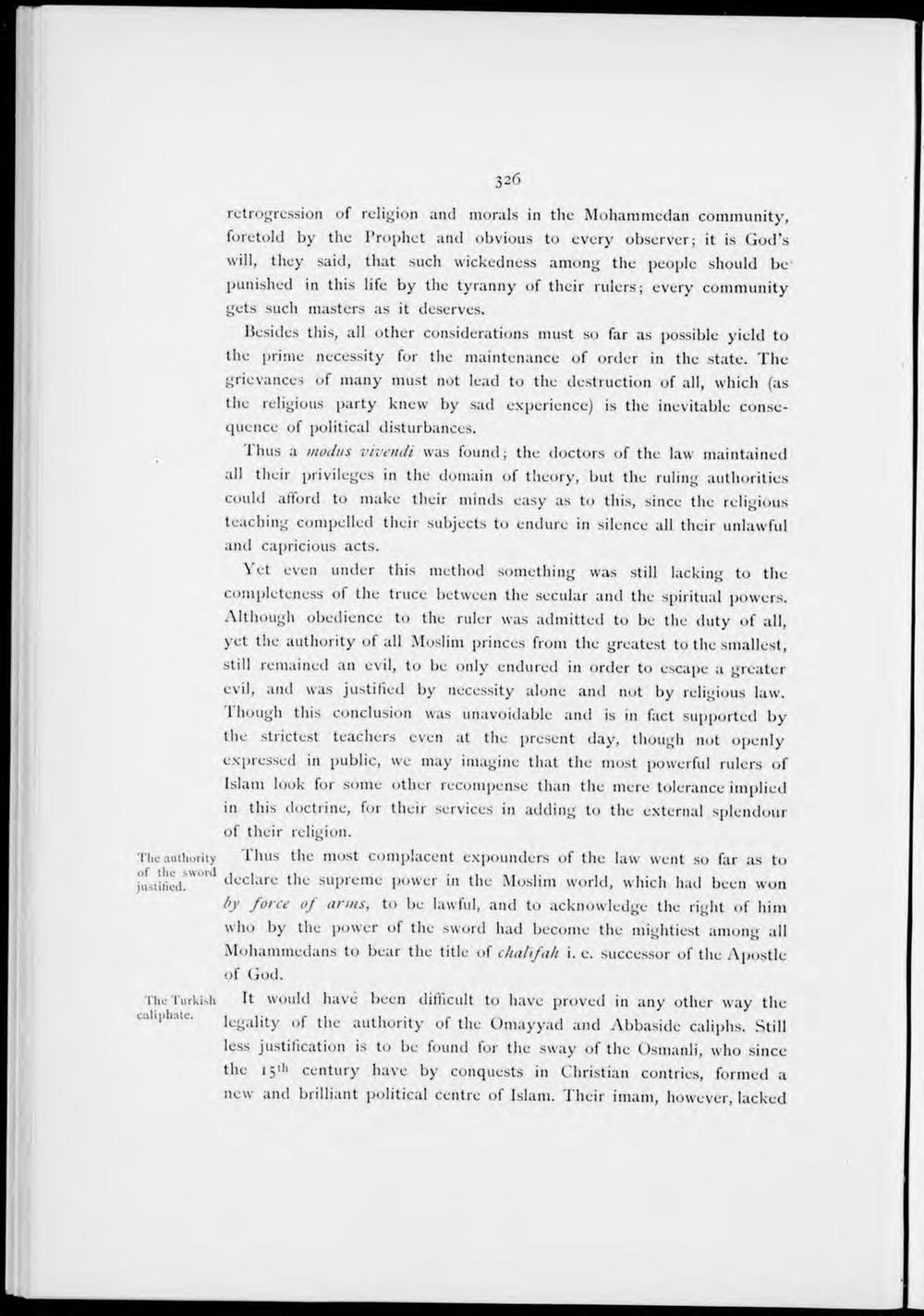 rctrogression ot reiigion and morals in the Mohammedan community, foretold by the Prophet and obvious to every observer; it is God's will, they said, that such wickedness among the people should be punished in this life by the tyranny of their rulers; every community gets such masters as it deserves.

Besides this, all other con.siderations must so far as possible yield to the prime necessity for the maintenance of order in the state. The grievances of many must not lead to the destruction of all, which (as the religious party knew by sad experience) is the inevitable consequence of political disturbances.

1 hus a modus vivendi was found; the doctors of the law maintained all their privileges in the domain of theory, but the ruling authorities could afford to make their minds easy as to this, since the religious teaching compelled their subjects to endure in silence all their unlawful and capricious acts.

Vet even under this method something was still lacking to the compieteness of the truce between the secular and the spiritual powers. Although obedience to the ruler was admitted to be the duty of all, yet the authority of all Moslim princes from the greatest to the smallest, still remained an evil, to be only endured in order to escape a greater evil, and was justified by necessity alone and not by religious law. I hougli this conclusion was unavoidable and is in fact supported by the strictest teachers even at the present day, though not openly expressed in public, we inay imagine that the most powerful rulers of Islam look for some other recompense than the inere tolerance implied in this doctrine, for their services in adding to the external splendour of their religion.

justified. declare the suprème power in the Moslim world, which had been won by farce of anus, to be Iawful, and to acknowledge the right of him wlio by the power of the sword had become the mightiest among all Mohammedans to bear the title of chafifah i. e. successor of the Apostle of (ïod.

The Turkish It would have been difficult to have proved in any other way the legality of the authority of the Omayyad and Abbaside caliphs. Still less justification is to be found for the sway of the Osmanli, who since the 15th century have by conquests in Christian contries, formed a ncw and brilliant political centre of Islam. Their imam, however, lacked