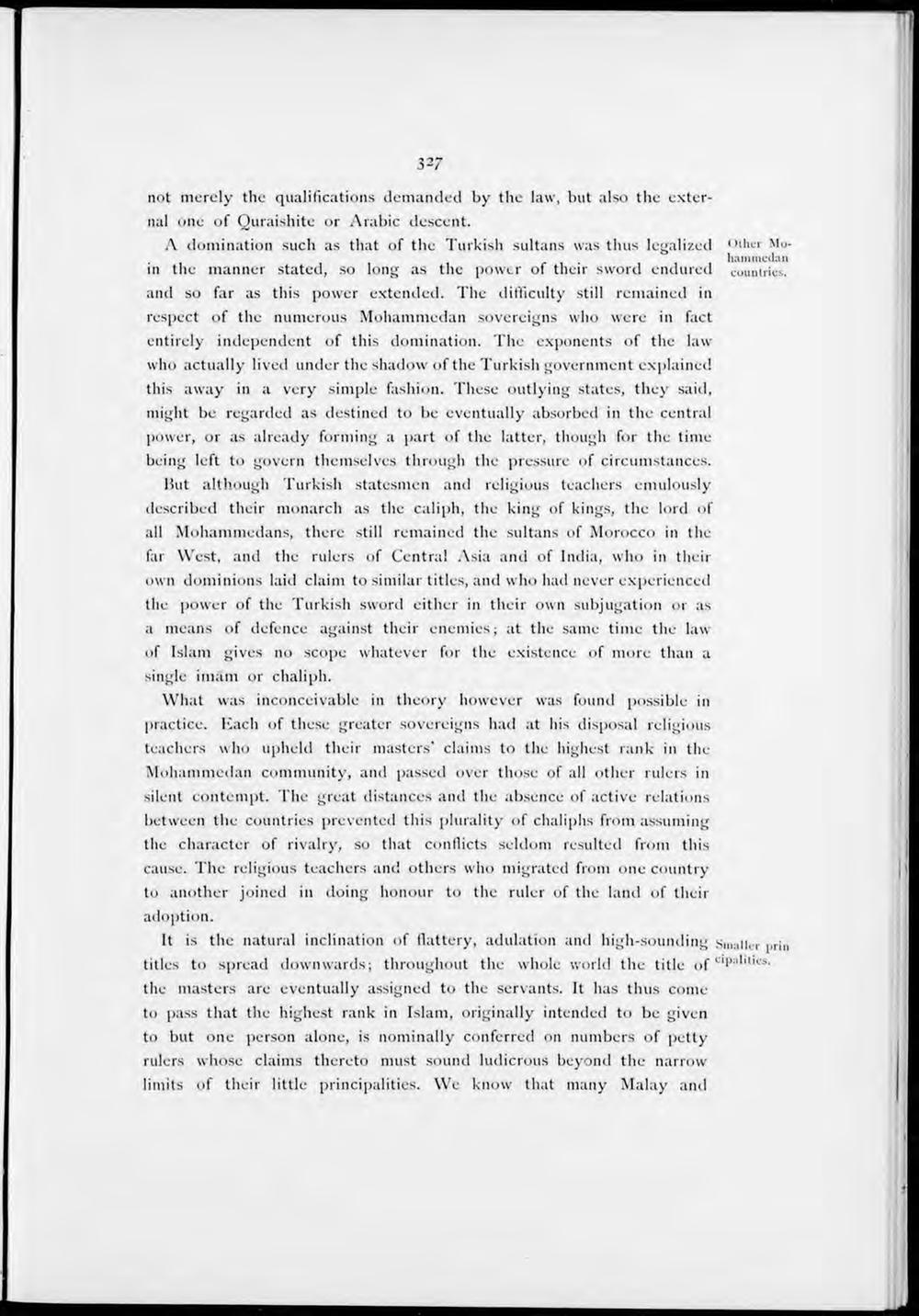 not merely the qualifications demanded by the law, but also the external one of Quraishitc or Arabic descent.

in the manner stated, so long as the power of their svvord endured countries. and so far as tliis power extended. The difficulty still remained in respect of the numerous Mohammedan sovereigns who were in fact entirely independent of tliis domination. The exponents of the law who actually lived under the shadow of the Turkish government explained this away in a very simple fashion. These outlying statos, they said,

might be regarded as destined to be eventually absorbed in the central power, or as already forming a part of the latter, though for the time being left to govern themselves through the pressure of circumstances.

Hut although Turkish statesmen and religious teachers emulously described their monarch as the caliph, the king of kings, the lord of all Mohammedans, there still remained the sultans of Morocco in the far West, and the rulers of Central Asia and of India, who in their own dominions laid claim to similar titles, and who had never experienced the power of the Turkish sword either in their own subjugation or as a means of defence against their eneinies; at tlie same time the law of Islam gives 110 scope whatever for the existence of more than a single imam or chaliph.

What was inconceivable in theory however was found possible in practice. Kach of these greater sovereigns had at liis disposal religious teachers who upheld their masters' claims to the highest rank in the Mohammedan community, and passed over those of all othcr rulers in silent contempt. The great distanccs and the absence of active relations between the countries prevented this plurality of chaliphs from assuming the character of rivalry, so that conflicts seldom resulted from this cause. The religious teachers and others who migrated from one country to another joined in doing honour to the rulcr of the land of their adoption.

It is the natural inclination of flattery, adulation and high-sounding Smaller prin titles to spread downwards; throughout the whole world the title of clP:,lltlesthe masters are eventually assigned to the servants. It lias thus comc to pass that the highest rank in Islam, originally intended to be given to but one person alone, is nominally conferred on numbers of petty rulers whose claims thereto must sound ludicrous beyond the narrow limits of their little principalities. We know that many Malay and