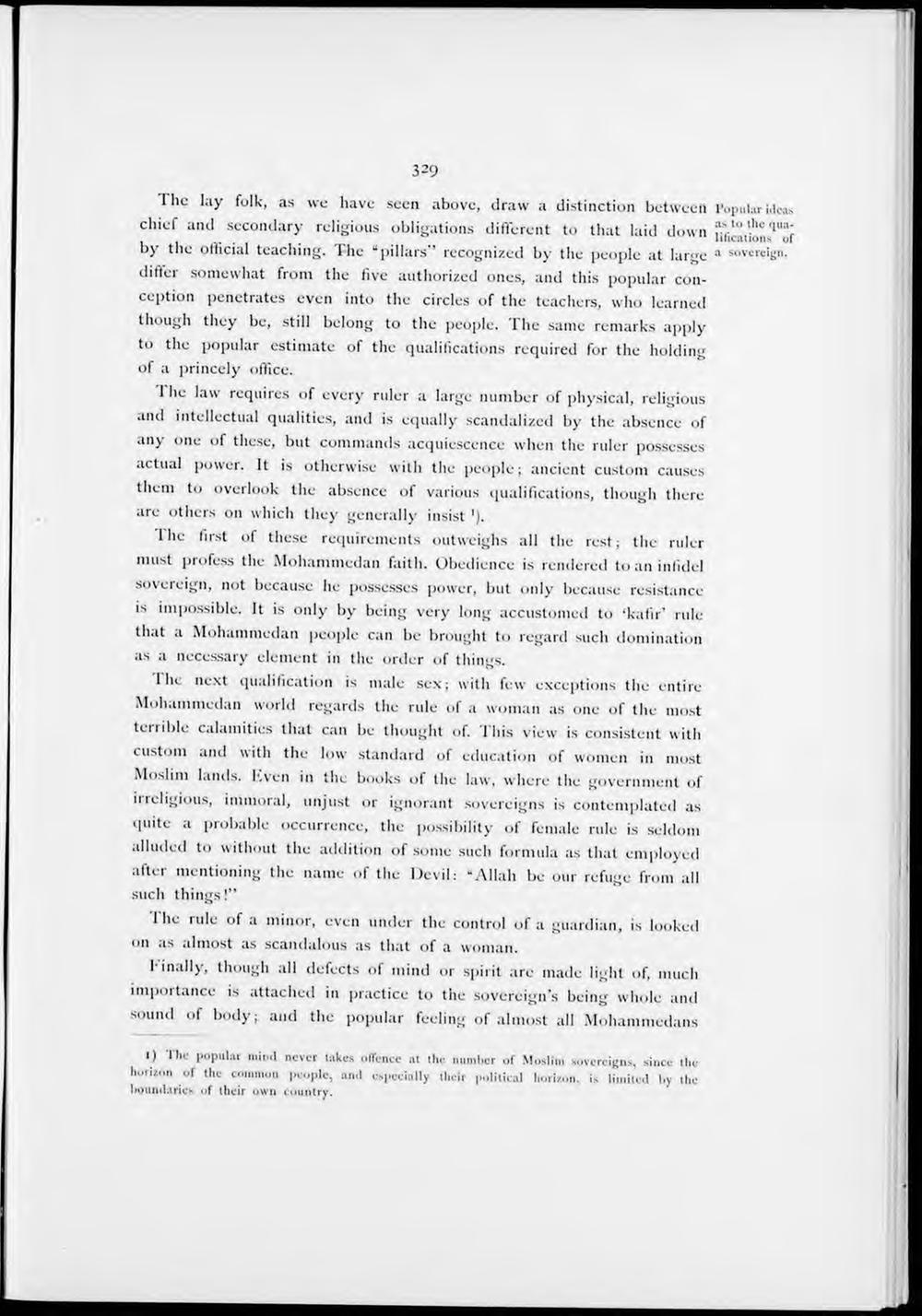 The lay folk, as we have secn above, draw a distinction between Popular ideas cliicf and secondary religious obligations different to that laid down the quar

by the otticial teaching. The "pillars" recognized by the people at large a s°vereign.

difier somewhat from the five authorized ones, and this popular conception penetrates even into the circles of the teachers, who learned though they be, still belong to the people. The sanie remarks apply to the popular estimate of the qualifications required for the holding of a princely office.

Ihe law requires of every ruler a large number of physical, religious and intellectual qualities, and is equally scandalized by the absence of any one of these, but commands acquiescence when the ruler possesses actual power. It is otherwise with the people; ancient custom causes them to overlook the absence of various qualifications, though tlierc are others 011 which they generally insist ').

Ihe first of these requirements outvveighs all the rest; the ruler must profess the Mohammedan faith. Obedience is rendered to an infidel sovereign, not because he possesses power, but only because resistance is impossible. It is only by being very long accustomed to 'kafir' rule that a Mohammedan people can be brought to regard such doniination as a necessary clement in the order of things.

Ihe next qualification is male sex; with few exceptions the entire Mohammedan world regards the rule of a woman as one of the most terrible calamities that can be thought of. This view is consistent with custom and with the low Standard of education of women in most Moslim Iands. hven in the books of the law, where the government of irreligious, immoral, unjust or ignorant sovereigns is contemplated as quite a probable occurrence, the possibility of female rule is seldom alluded to without the addition of sonie such formula as that employed after mentioning the name of the Devil: "Allah be our refuge from all such things!"

The rule of a minor, even under the control of a guardian, is looked on as almost as scandalous as that of a woman.

1 inally, though all defects of mind or spirit are made light of, much importance is attached in practice to the sovereigns being whole and sound of body; and the popular feeling of almost all Mohammedans

i) The popular mind nevcr lakes olTence at the number of Moslim sovereigns, since the horizon of the common people, and especially their political horizon, is limited l.y the Ixmndaries of thcir own country.