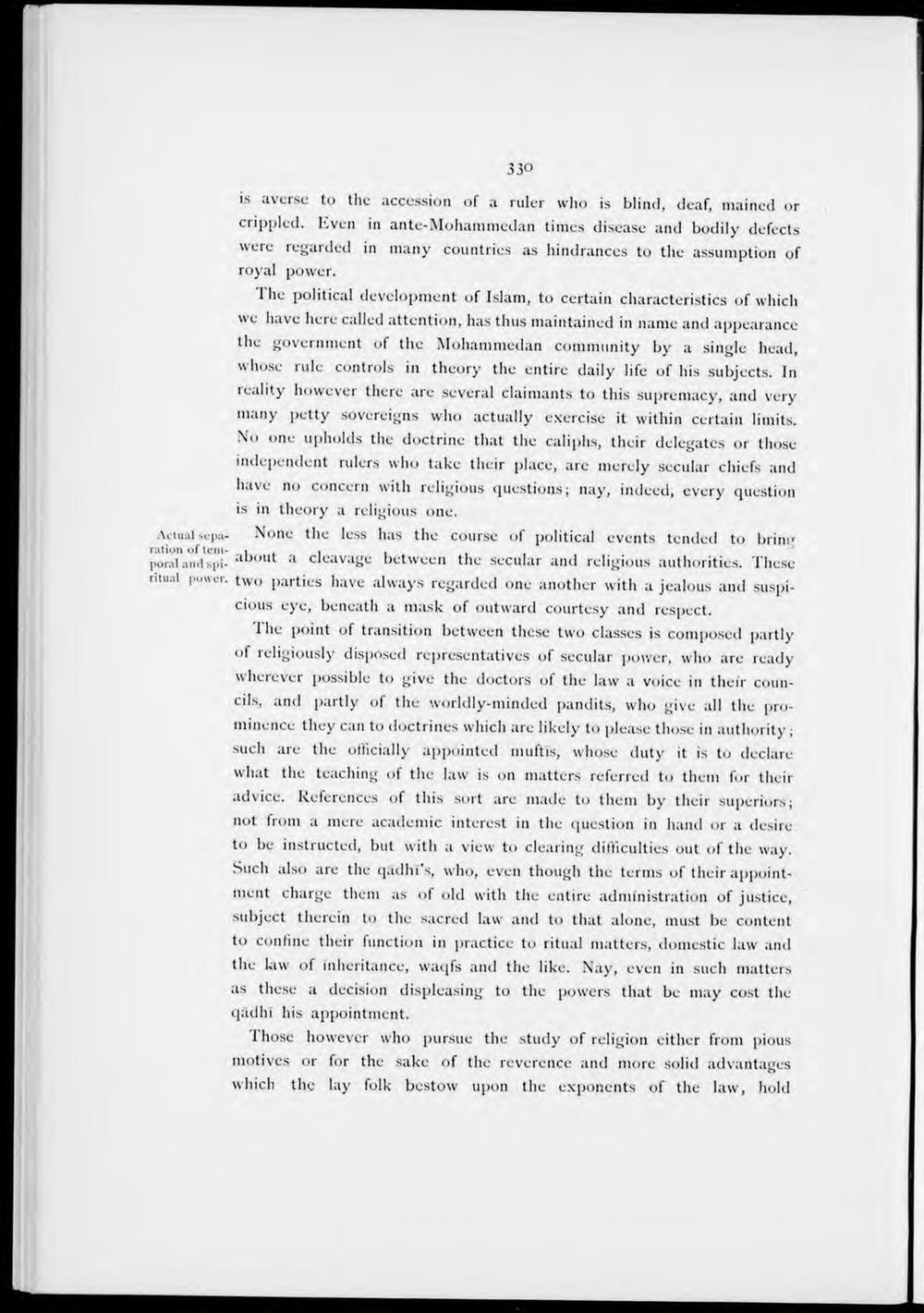 is averse to the accession of a ruler who is blind, deaf, mained or crippled. Even in ante-Mohammedan times disease and bodily defects vvere regarded in many countries as hindrances to the assumption of royal power.

The political devclopment of Islam, to certain characteristics of which we have here called attention, has thus maintained in name and appearance the government of the Mohammedan commnnity by a single head, whose rule controls in theory the entire daily life of his subjects. In ïeality however there are several claimants to this supremacy, and very many petty sovereigns who actually exercise it within certain limits. No one upholds the doctrine that the caliphs, their delegates or those independent rulers who take their place, are merely secular cliiefs and have no concern with religious questions; nay, indeed, every question is in theory a religious one.

poral andspi- ut a cleavaSe bctwecn the secular and religious authorities. These ritual power. tWo parties have always regarded one another with a jealous and suspicious eye, beneath a mask of outward courtesy and respect.

Ihe point of transition between these two classes is composed partly of religiously disposed representatives of secular power, who are ready w herever possible to give the doctors of the law a voice in their councils, and partly of the worldly-minded pandits, who give all the proniinence they can to doctrines which are likely to please those in authority; such are the ofiicially appointed muftïs, whose duty it is to declare what the teaching of the law is on matters referred to them for their advice. lveferences of this sort are made to them by their superiors; not from a mere academie interest in the question in hand or a desire to be instructed, but with a view to clearing difficulties out of the vvay. Such also are the qadhi's, who, even though the ternis of their appointment charge them as of old with the entire administration of justice, subject therein to the sacred law and to that alone, must be content to confine their function in practice to ritual matters, domestic law and the law of inheritance, waqfs and the like. Nay, even in such matters as these a decision displeasing to the powers that be may cost the qadhï his appointment.

1 hose however who pursue the study of religion either from pious motives or for the sake of the reverence and more solid advantages which the lay folk bestow upon the exponents of the law, hold