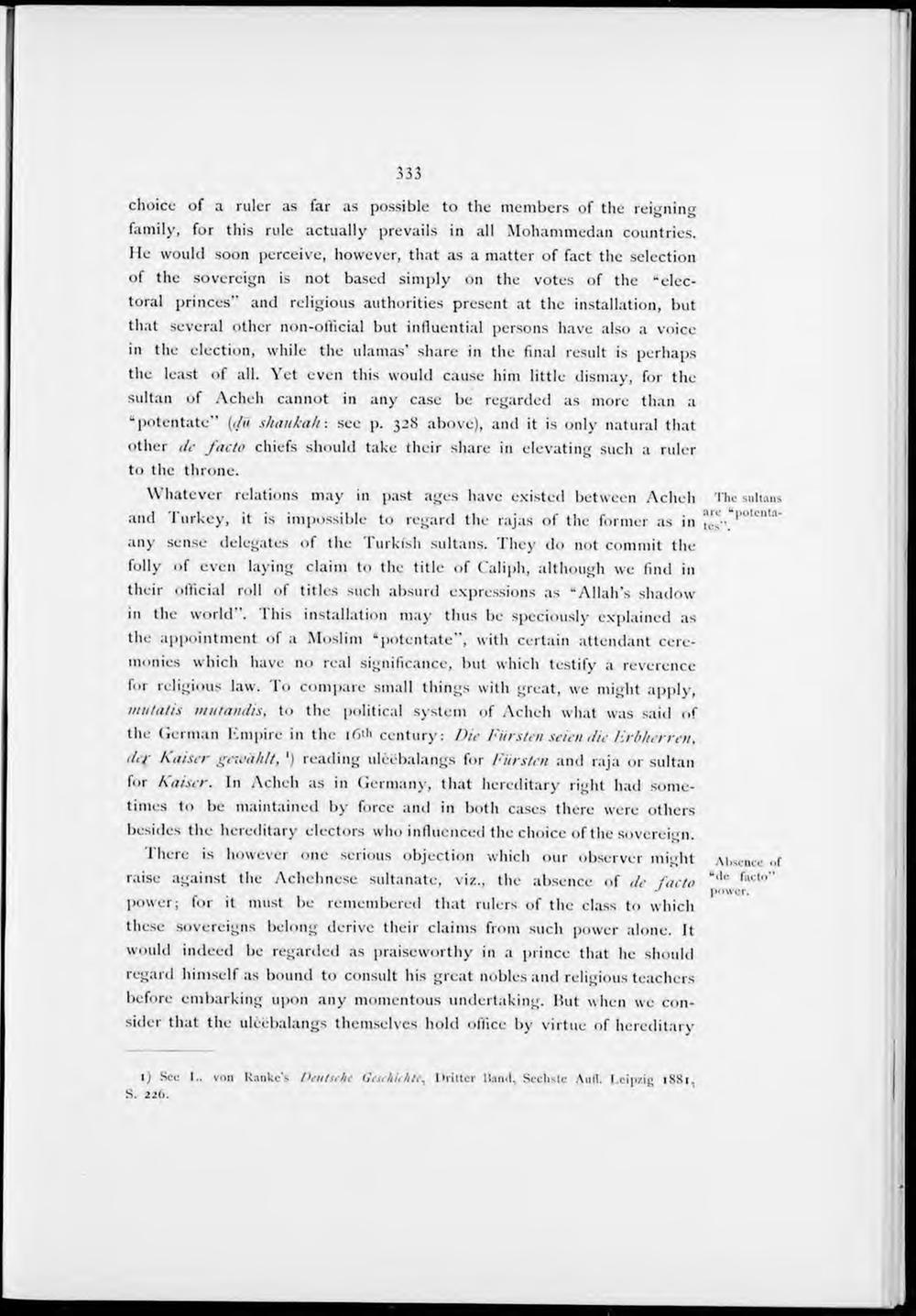 choice of a ruler as far as possible to the members of the reigning family, for tliis rulc actually prevails in all Mohammedan countries.

He wou ld soon perceive, however, tliat as a matter of fact the selection of the sovereign is not based simply on the votes of the "electoral princes" and religious authorities present at the installation, but that several other non-official but influential persons have also a voice in the election, while the ulamas' share in the final result is perhaps the least of all. Yet even tliis would cause him little distnay, for the sultan of Acheh cannot in any case be regarded as more than a "potentate" (du shaula/t: sec p. 328 above), and it is only natural that other de facto chiefs should take their share in elevating such a ruler to the throne.

Whatever relations may in past ages have existed bctwecn Acheh The sultans and 1 urkey, it is impossible to regard the rajas of the former as in l>otulta~ any sense delegates of the 1 urki'sh sultans. I hey do not commit the folly of even laying claim to the title of Caliph, although we find in their official roll of titles such absurd expressions as "Allah's shadow in the world". Tliis installation may tlius be speciously explained as the appointment of a Moslim "potentate", with certain attendant ceremonies which have 110 real significance, but which testify a reverence for religious law. To compare small things with great, we might apply,

mutatis mutandis, to the political system of Acheh what was said of the German Empire in the i6'l> century: Die Fiirsten seien die lirbherren,

dei kuiser gewuhlt, ') reading ulèëbalangs for Fiirsten and raja or sultan for kuiser. I11 Acheh as in Germany, that hereditary right had sometimes to be maintained by force and in both cases there were others besides the hereditary electors who influenced the choice of the sovereign.

There is however one serious objection which our observer might Absence of raise against the Achehnese sultanate, viz., the absence of de fueto "<le fact<>"

power; for it must be remembered that rulers of the class to which these sovereigns belong derive their claims from such power alone. It would indeed be regarded as praiseworthy in a prince that he should regard hiniself as bound to consult his great nobles and religious teachers before embarking upon any momentous undertaking. Hut wlien we consider that the ulèëbalangs themselves hold office by virtue of hereditary