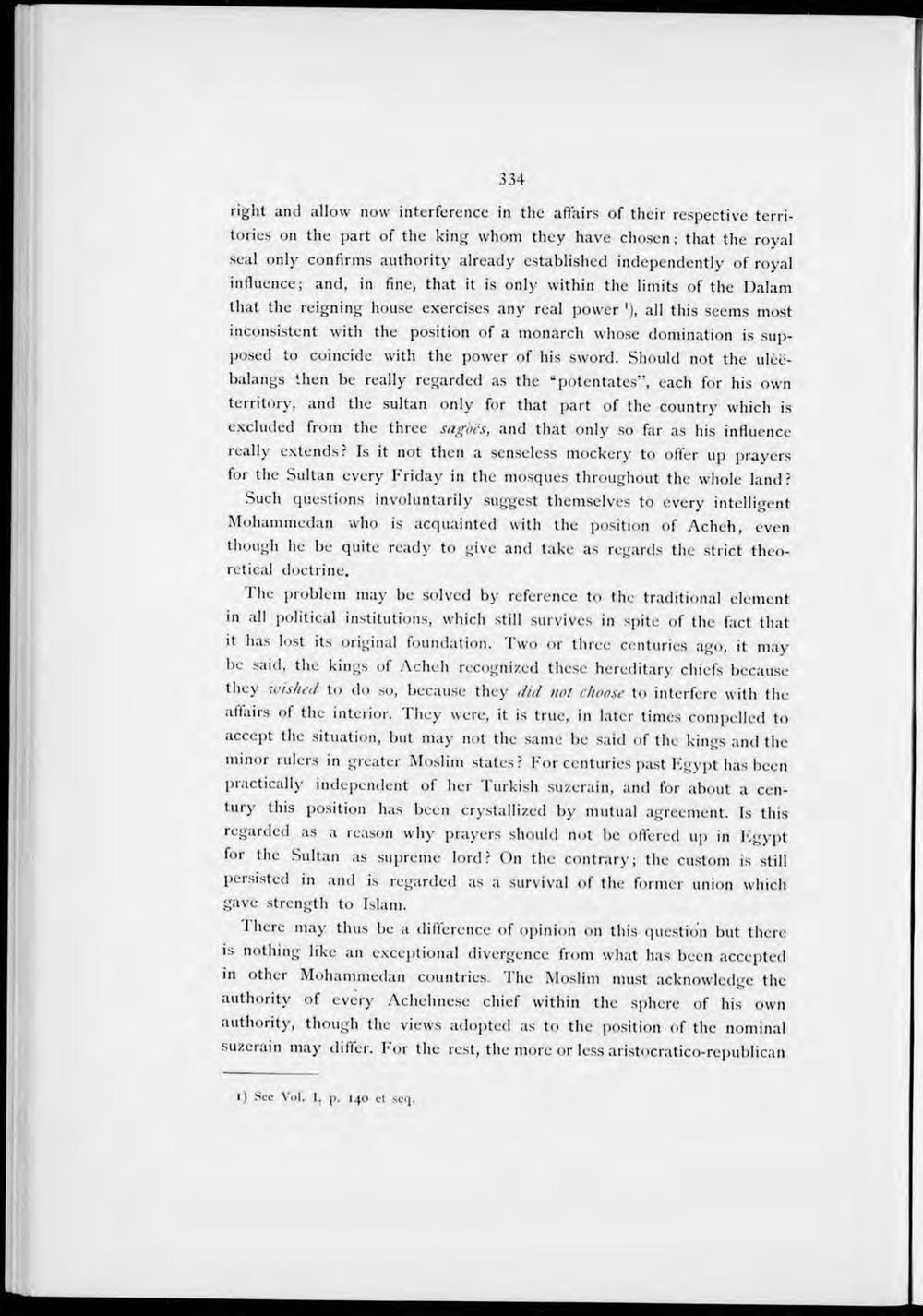 right and allovv now interference in the aftairs of thcir respective territories on the part of the king whom they have chosen; that the royal seal only confirms authority already established independently of royal influence; and, in fine, that it is only within the limits of the Dalam that the reigning house exercises any real power '), all this seems most inconsistent with the position of a monarch wliose domination is supposed to coincide with the power of his sword. Should not the ulèëbalangs then be really regarded as the "potentates", each for his own territory, and the sultan only for that part of the country which is excluded from the thrce sagbës, and that only so far as his influence really extends? Is it not then a senseless mockery to offer up prayers for the Sultan every Friday in the mosques throughout the whole land?

Such questions involuntarily suggest themselves to every intelligent Mohammedan who is acquainted with the position of Acheh, even though he be quite ready to give and take as regards the strict theoretical doctrine.

The problem may be solved by reference to the traditional element in all political institutions, which still survives in spite of the fact that it has lost its original foundation. Two or three centuries ago, it may be said, the kings of Acheh recognized these hereditary chiefs because they wished to do so, because they did not choose to interfere with the affairs of the interior. They were, it is truc, in later times compclled to accept the situation, but may not the same be said of the kings and the minor rulers in greater Moslim states? For centuries past Kgypt has been practically independent of her Turkish suzerain, and for about a century this position has been crystallized by mutual agreement. Is this regarded as a reason why prayers should not be offered up in Egypt for the Sultan as supreme lord? On the contrary; the custom is still persisted in and is regarded as a survival of the former union which gave strength to Islam.

I here may thus be a difference of opinion on this question but there is nothing like an exceptional divergence from what has been accepted in other Mohammedan countries. The Moslim must acknowledge the authority of every Achehnese chief within the sphere of his own authority, though the views adopted as to the position of the nominal suzerain may differ. 1'or the rest, the more or less aristocratico-republican