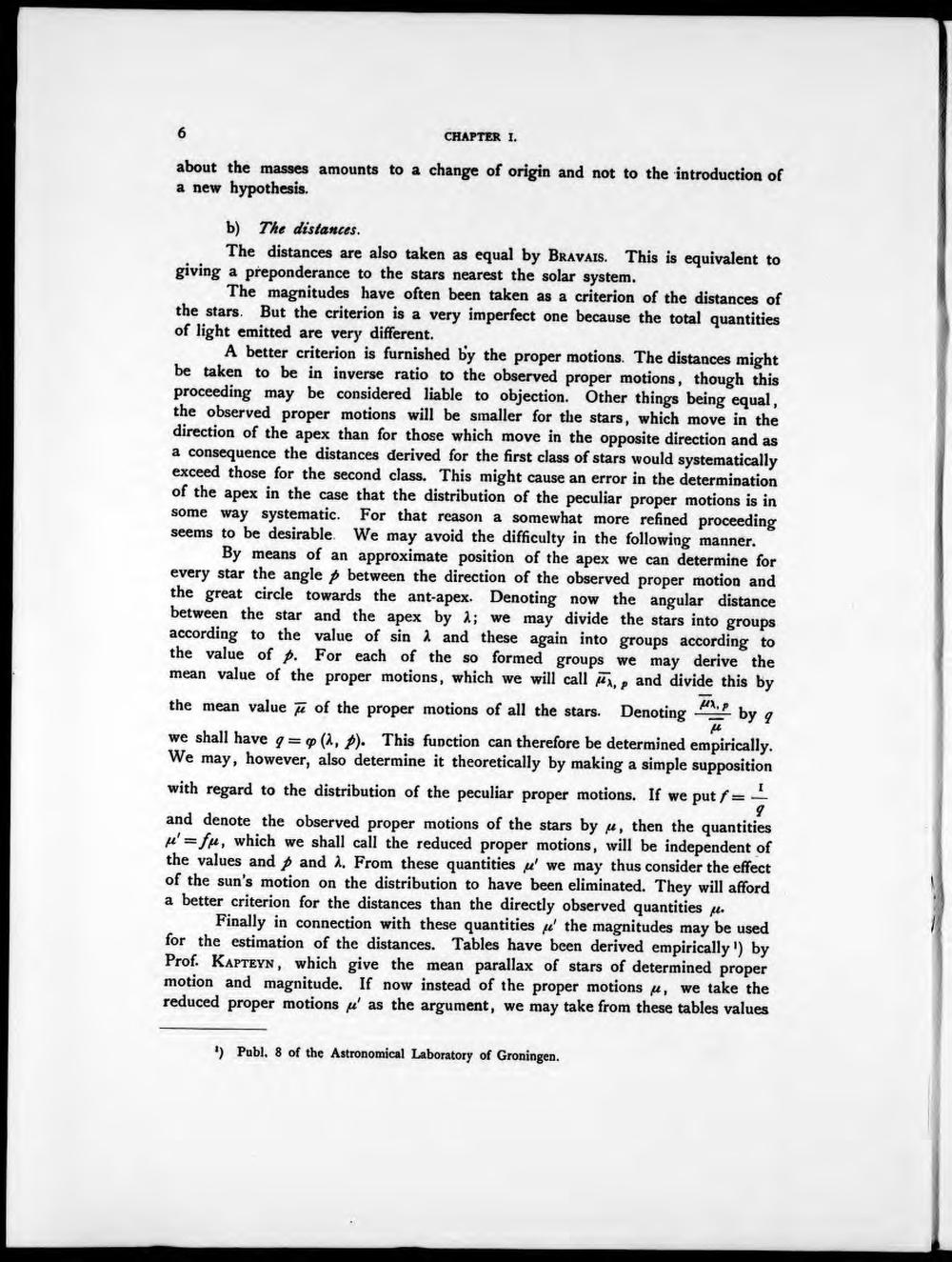 about the masses amounts to a change of origin and not to the introduction of a new hypothesis.

The distances are also taken as equal by Bravais. This is equivalent to giving a preponderance to the stars nearest the solar system.

The magnitudes have often been taken as a criterion of the distances of the stars. But the criterion is a very imperfect one because the total quantities of light emitted are very different.

A better criterion is furnished b'y the proper motions. The distances might be taken to be in inverse ratio to the observed proper motions, though this proceeding may be considered liable to objection. Other things being equal, the observed proper motions will be smaller for the stars, which move in thé direction of the apex than for those which move in the opposite direction and as a consequence the distances derived for the first class of stars vvould systematically exceed those for the second class. This might cause an error in the determination of the apex in the case that the distribution of the peculiar proper motions is in some way systematic. For that reason a somewhat more refined proceedinoseems to be desirable We may avoid the difficulty in the following manner. *

By means of an approximate position of the apex we can determine for every star the angle p between the direction of the observed proper motion and the great circle towards the ant-apex. Denoting now the angular distance between the star and the apex by A; we may divide the stars into groups according to the value of sin A and these again into groups according to the value of p. For each of the so formed groups we may derive the mean value of the proper motions, which we will call JTXf p and divide this by

the mean value ^ of the proper motions of all the stars. Denoting by q

we shall have q = rp{A, ƒ). This function can therefore be determined empirically. We may, however, also determine it theoretically by making a simple supposition

with regard to the distribution of the peculiar proper motions. If we put f — —

and denote the observed proper motions of the stars by fi, then the quantities which we shall call the reduced proper motions, will be independent of the values and p and A. From these quantities p' we may thus consider the effect of the sun's motion on the distribution to have been eliminated. They will afford a better criterion for the distances than the directly observed quantities /li.

Finally in connection with these quantities the magnitudes may be used for the estimation of the distances. Tables have been derived empirically1) by Prof. Kapteyn , which give the mean parallax of stars of determined proper motion and magnitude. If now instead of the proper motions /u, we take the reduced proper motions ju' as the argument, we may take from these tables values

') Publ. 8 of the Astronomical Laboratory of Groningen.