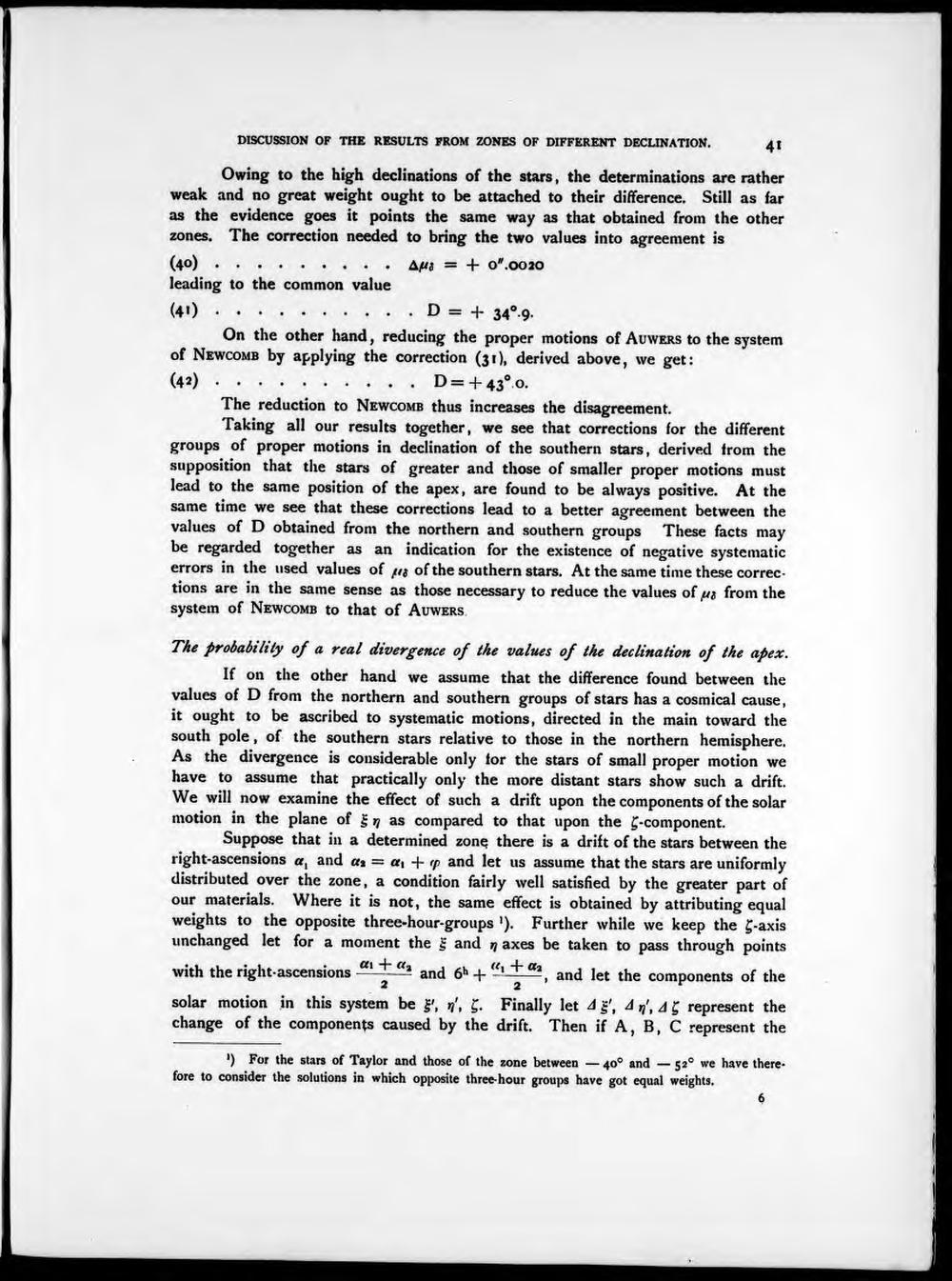 Owing to the high declinations of the stars, the determinations are rather weak and no great weight ought to be attached to their difference. Still as far as the evidence goes it points the same way as that obtained from the other zones. The correction needed to bring the two values into agreenient is

leading to the common value

On the other hand, reducing the proper motions of Auwers to the system of Newcomb by applying the correction (31), derived above, we get:

The reduction to Newcomb thus increases the disagreement. raking all our results together, we see that corrections for the different groups of proper motions in declination of the southern stars, derived Irom the supposition that the stars of greater and those of smaller proper motions must lead to the same position of the apex, are found to be always positive. At the same time we see that these corrections lead to a better agreement between the values of D obtained from the northern and southern groups These facts may be regarded together as an indication for the existence of negative systematic errors in the used values of {/$ of the southern stars. At the same time these corrections are in the same sense as those necessary to reduce the values of /us from the system of Newcomb to that of Auwers

The probability of a real divergence of the values of the declination of the apex.

If 011 the other hand we assume that the difference found between the values of D from the northern and southern groups of stars has a cosmical cause, it ought to be ascribed to systematic motions, directed in the main toward the south pole, of the southern stars relative to those in the northern hemisphere. As the divergence is considerable only lor the stars of small proper motion we have to assume that practically only the more distant stars show such a drift. We will now examine the effect of such a drift upon the components of the solar motion in the plane of £ rj as compared to that upon the ^-component.

Suppose that in a determined zone there is a drift of the stars between the right-ascensions and «» = «, + tp and let us assume that the stars are uniformly distributed over the zone, a condition fairly well satisfied by the greater part of our materials. Where it is not, the same effect is obtained by attributing equal weights to the opposite three-hour-groups '). Further while we keep the £-axis unchanged let for a moment the £ and tj axes be taken to pass through points

with the right-ascensions and 6h + -L±ü?f and let the components of the

solar motion in this system be j/, £. Finally let A A n\ a £ represent the change of the components caused by the drift. Then if A, B, C represent the

') For the stars of Taylor and those of the zone between —40° and — 52° we have therefore to consider the solutions in which opposite three-hour groups have got equal weights.