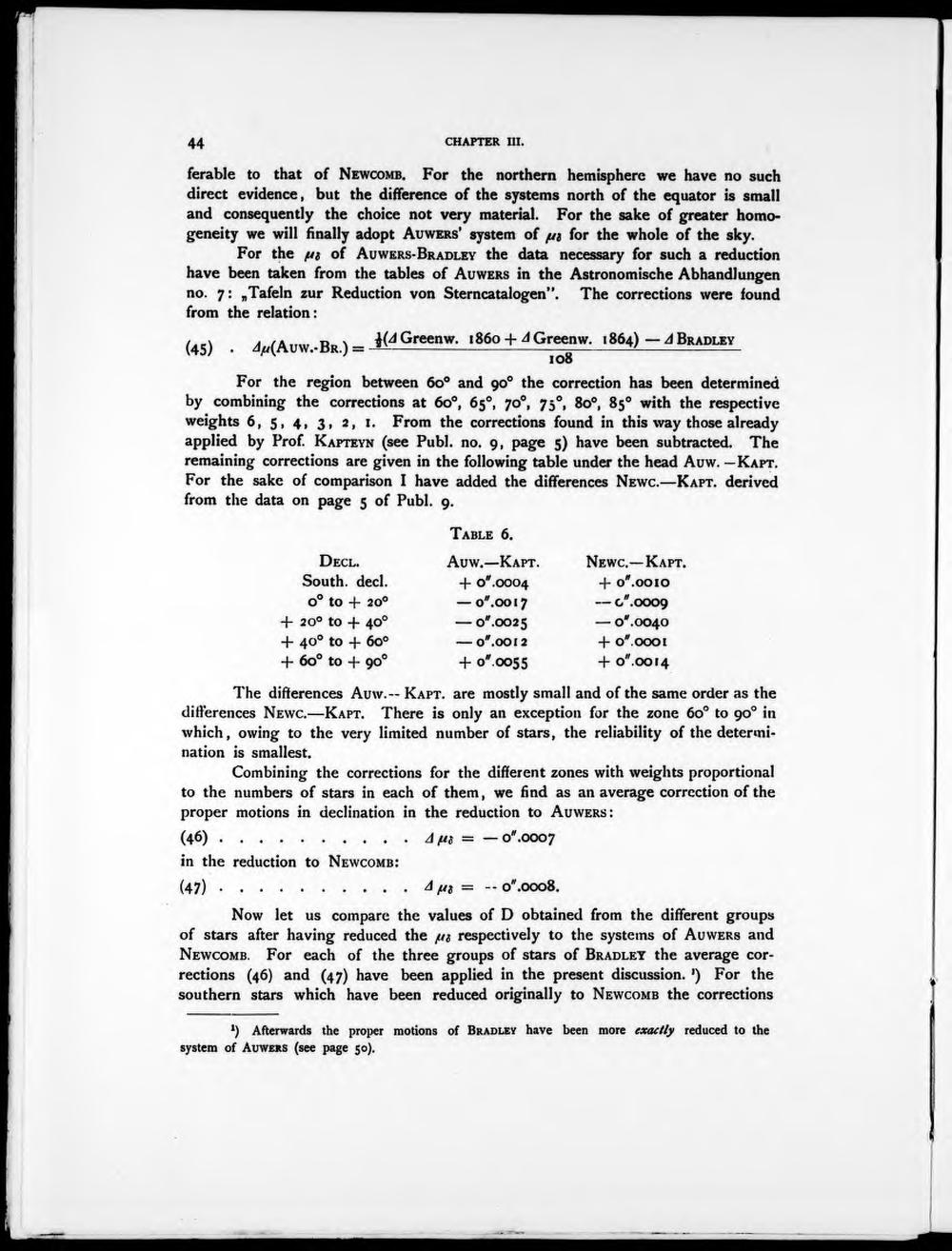 ferable to that of Newcomb. For the northern hemispherc we have no such direct evidence, but the difference of the systems north of the equator is small and consequently the choice not very material. For the sake of greater homogeneity we will finally adopt Auwers' system of /ug for the whole of the sky.

For the /ug of Auwers-Bradley the data necessary for such a reduction have been taken froni the tables of Auwers in the Astronomische Abhandlungen no. 7: „Tafeln zur Reduction von Sterncatalogen". The corrections were found from the relation:

For the region between 6o° and 90° the correction has been determined by combining the corrections at 60°, 65°, 70°, 750, 8o°, 85° with the respective weights 6, 5, 4, 3, 2, 1. From the corrections found in this way those already applied by Prof. Kapteyn (see Publ. no. 9, page 5) have been subtracted. The remaining corrections are given in the following table under the head Auw. —Kapt. For the sake of comparison I have added the differences Newc.—Kapt. derived from the data on page 5 of Publ. 9.

The difterences Auw.-- Kapt. are mostly small and of the same order as the differences Newc.—Kapt. There is only an exception for the zone 6o° to 90° in which, owing to the very limited number of stars, the reliability of the determination is smallest.

Combining the corrections for the different zones with weights proportional to the numbers of stars in each of them, we find as an average correction of the proper motions in declination in the reduction to Auwers:

in the reduction to Newcomb:

Now let us compare the values of D obtained from the different groups of stars after ha ving reduced the /us respectively to the systems of Auwers and Newcomb. For each of the three groups of stars of Bradley the average corrections (46) and (47) have been applied in the present discussion. ') For the southern stars which have been reduced originally to Newcomb the corrections

*) Afterwards the proper motions of Bradley have been more exactly reduced to the system of Auwers (see page 50).