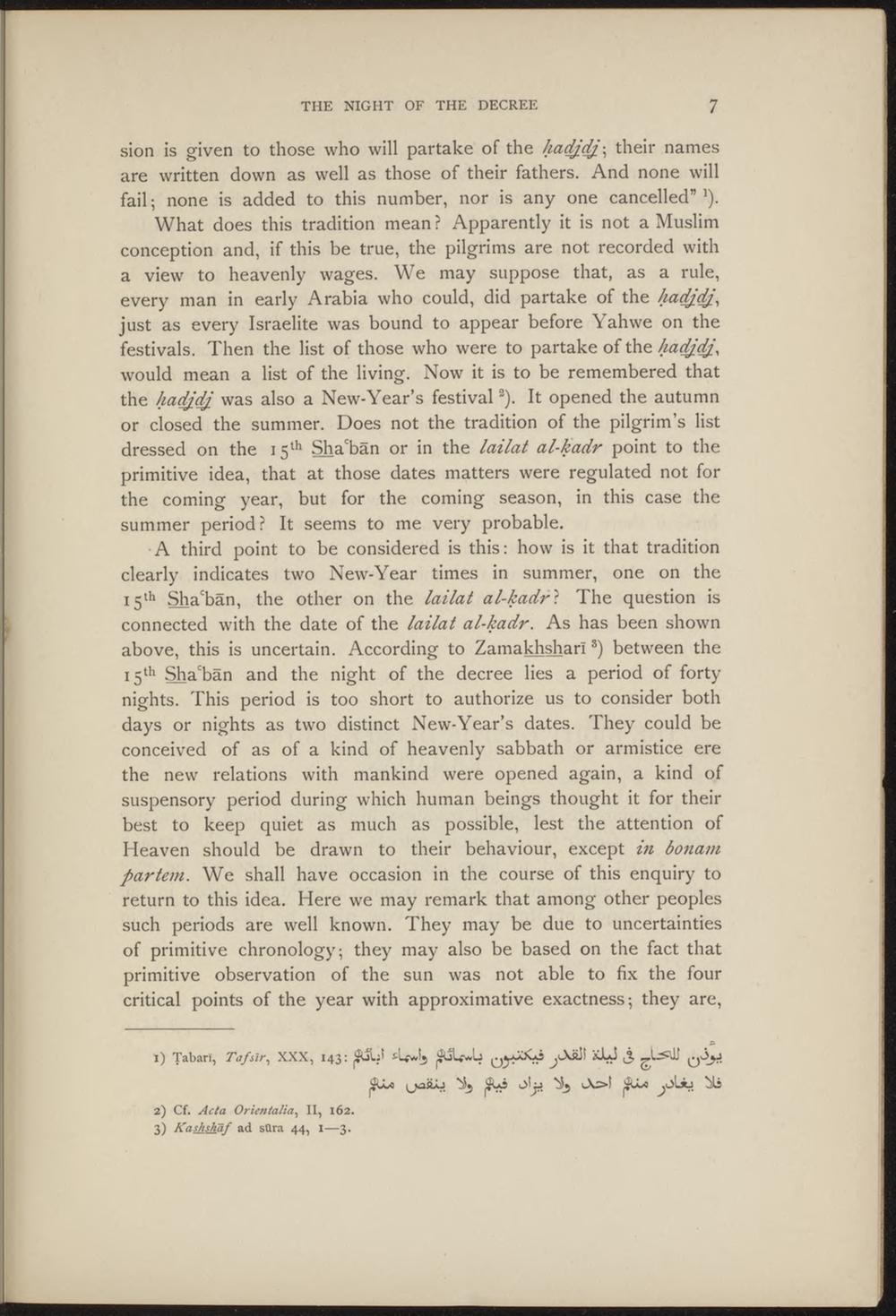 sion is given to those who will partake of the hadj_dj_; their names are written down as well as those of their fathers. And none will fail; none is added to this number, nor is any one cancelled" ]).

What does this tradition mean ? Apparently it is not a Muslim conception and, if this be true, the pilgrims are not recorded with a view to heavenly wages. We may suppose that, as a rule, every man in early Arabia who could, did partake of the hadj_dj_, just as every Israelite was bound to appear before Yahwe on the festivals. Then the list of those who were to partake of the hadj_^ would mean a list of the living. Now it is to be remembered that the hadj_dj. was also a New-Year's festival2). It opened the autumn or closed the summer. Does not the tradition of the pilgrim's list dressed on the i5th Sha'ban or in the lailat al-kadr point to the primitive idea, that at those dates matters were regulated not for the coming year, but for the coming season, in this case the summer period? It seems to me very probable.

A third point to be considered is this: how is it that tradition clearly indicates two New-Year times in summer, one on the I5th Shacban, the other on the lailat al-kadr? The question is connected with the date of the lailat al-kadr. As has been shown above, this is uncertain. According to Zamakhsharï8) between the i5th Sha'ban and the night of the decree lies a period of forty nights. This period is too short to authorize us to consider both days or nights as two distinct New-Year's dates. They could be conceived of as of a kind of heavenly sabbath or armistice ere the new relations with mankind were opened again, a kind of suspensory period during which human beings thought it for their best to keep quiet as much as possible, lest the attention of Heaven should be drawn to their behaviour, except in bonam partem. We shall have occasion in the course of this enquiry to return to this idea. Here we may remark that among other peoples such periods are well known. They may be due to uncertainties of primitive chronology; they may also be based on the fact that primitive observation of the sun was not able to fix the four critical points of the year with approximative exactness; they are,