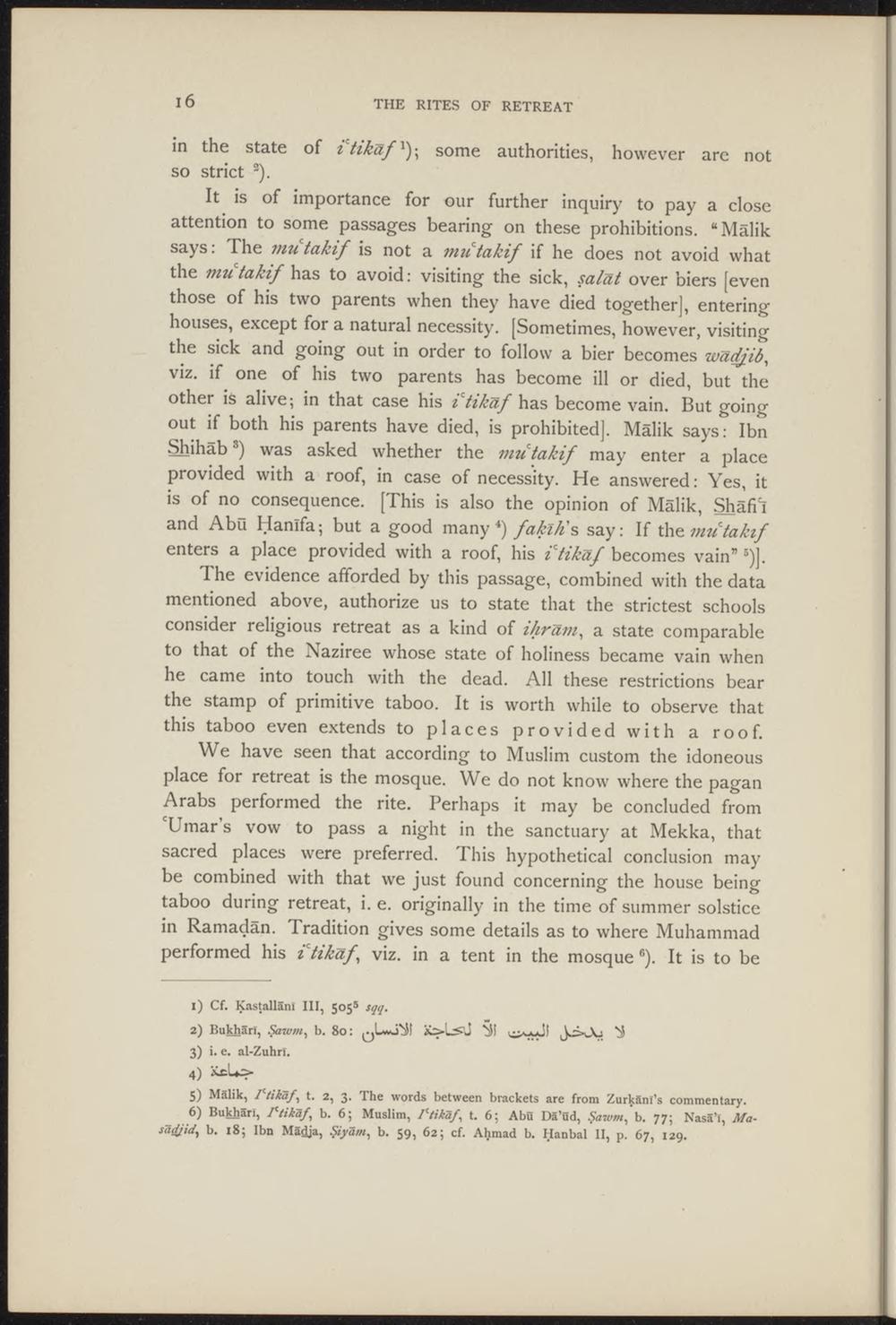 in the state of i tikaf some authorities, however are not so strict 3).

It is of importance for our further inquiry to pay a close attention to some passages bearing on these prohibitions. "Malik says • The mutakif is not a mutakif if he does not avoid what the mutakif has to avoid: visiting the sick, salat over biers [even those of his two parents when they have died together], entering houses, except for a natural necessity. [Sometimes, however, visiting the sick and going out in order to follow a bier becomes wadfib, viz. if one of his two parents has become ill or died, but the other is alive; in that case his i tikaf has become vain. But going out if both his parents have died, is prohibited]. Malik sayst Ibn Shihabs) was asked whether the mutakif may enter a place provided with a roof, in case of necessity. He answered: Yes, it is of no consequence. [This is also the opinion of Malik, Shafii and Abü Hanlfa; but a good many 4) faklKs say: If the mutakif enters a place provided with a roof, his ïtikaf becomes vain" •)].

The evidence afforded by this passage, combined with the data mentioned above, authorize us to state that the strictest schools consider religious retreat as a kind of ihram, a state comparable to that of the Naziree whose state of holiness became vain when he came into touch with the dead. All these restrictions bear the stamp of primitive taboo. It is worth while to observe that this taboo even extends to places provided with a roof.

We have seen that according to Muslim custom the idoneous place for retreat is the mosque. We do not know where the pagan Arabs performed the rite. Perhaps it may be concluded from Umar s vow to pass a night in the sanctuary at Mekka, that sacred places were preferred. This hypothetical conclusion may be combined with that we just found concerning the house being taboo during retreat, i. e. originally in the time of summer solstice in Ramadan. Tradition gives some details as to where Muhammad performed his i tikaf\ viz. in a tent in the mosque6). It is to be

5) Malik, I tikaf, t. 2, 3. The words between brackets are from Zurkanï's commentary.