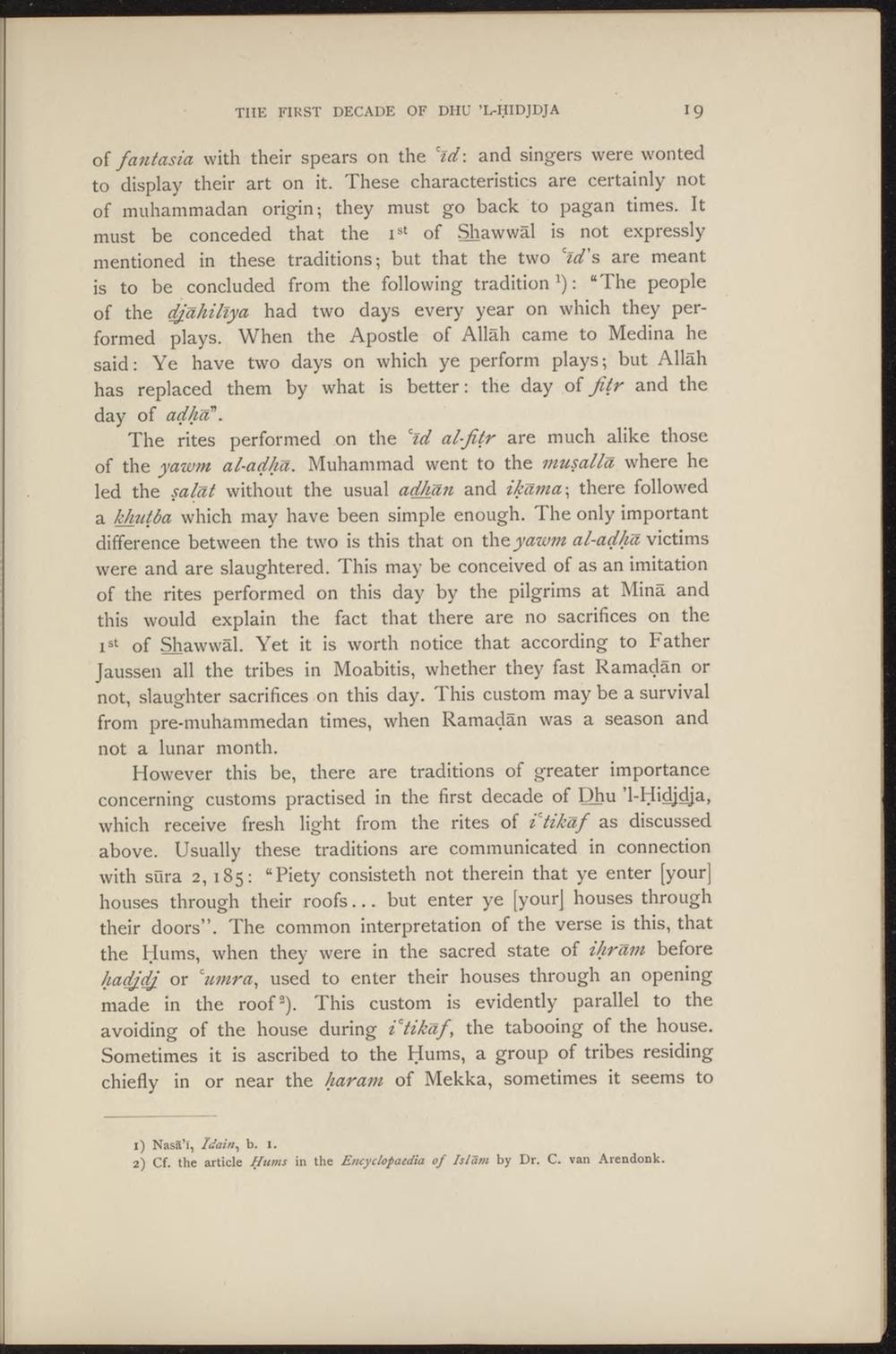 of fantasia with their spears on the cld: and singers were wonted to display their art on it. These characteristics are certainly not of muhammadan origin; they must go back to pagan times. It must be conceded that the ist of Shawwal is not expressly mentioned in these traditions; but that the two cïd's are meant is to be concluded from the following traditionl): "The people of the dj_ahillya had two days every year on which they performed plays. When the Apostle of Allah came to Medina he said: Ye have two days on which ye perform plays; but Allah has replaced them by what is better: the day offitr and the day of adhcC.

The rites performed on the 'ld al-fitr are much alike those of the yawm al-adha. Muhammad went to the musalla where he led the sa lat without the usual adlian and ikama\ there followed a khutba which may have been simple enough. The only important difference between the two is this that on the yawm al-adha victims were and are slaughtered. Ihis may be conceived of as an imitation of the rites performed on this day by the pilgrims at Mina and this would explain the fact that there are no sacrifices on the ist of Shawwal. Yet it is worth notice that according to Father Jaussen all the tribes in Moabitis, whether they fast Ramadan or not, slaughter sacrifices on this day. This custom may be a survival from pre-muhammedan times, when Ramadan was a season and not a lunar month.

However this be, there are traditions of greater importance concerning customs practised in the first decade of Dhu 1-Hidjdja, which receive fresh light from the rites of ïtikaf as discussed above. Usually these traditions are communicated in connection with süra 2, 185: "Piety consisteth not therein that ye enter [your] houses through their roofs... but enter ye [yourj houses through their doors". The common interpretation of the verse is this, that the Hums, when they were in the sacred state of ihram before hadj_d£ or cumra, used to enter their houses through an opening made in the roof3). This custom is evidently parallel to the avoiding of the house during Vtikaf, the tabooing of the house. Sometimes it is ascribed to the Hums, a group of tribes residing chiefiy in or near the haram of Mekka, sometimes it seems to

2) Cf. the article Hums in the Encyclopaedia of Islam by Dr. C. van Arendonk.