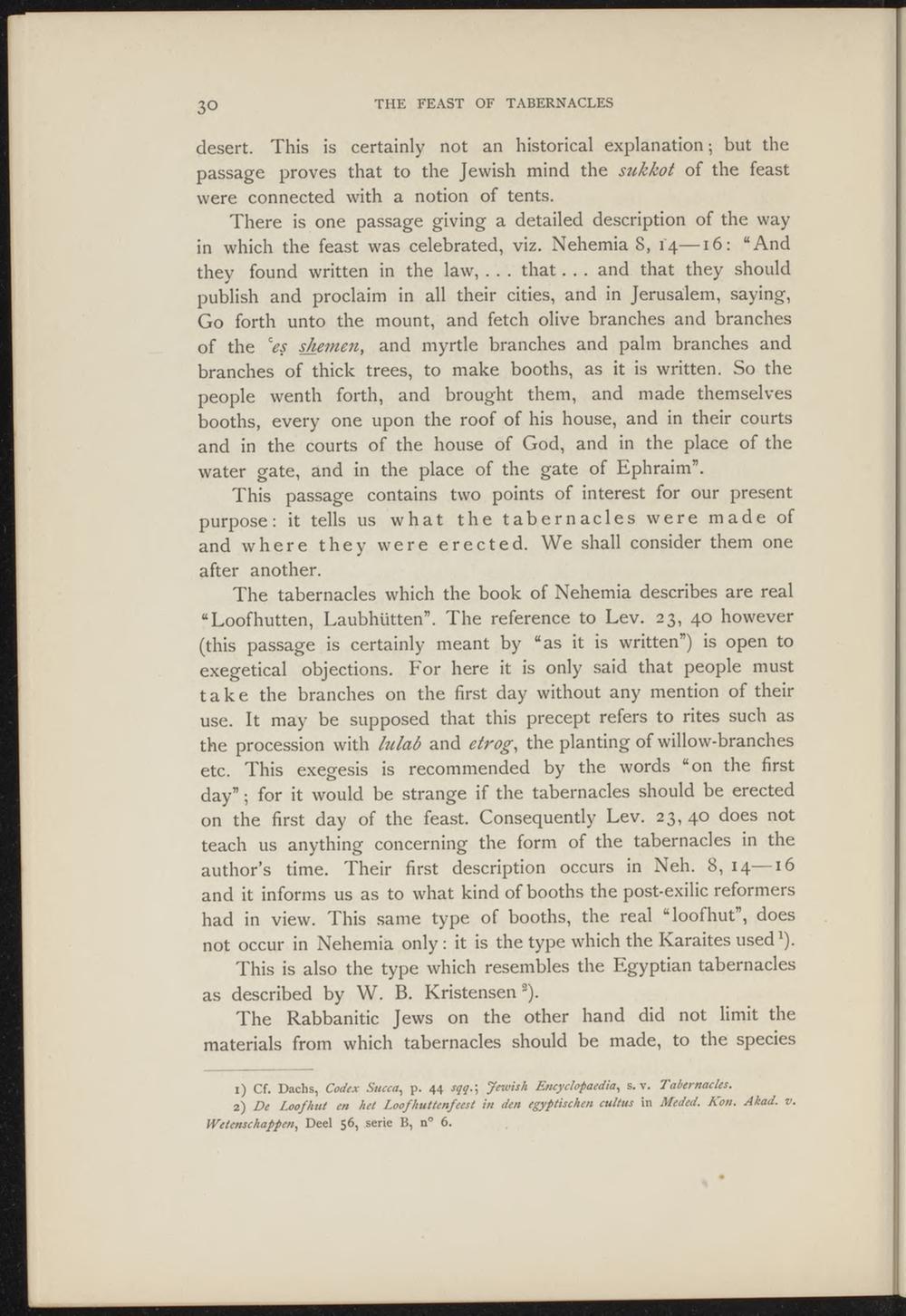 desert. This is certainly not an historical explanation; but the passage proves that to the Jewish mind the sukkot of the feast vvere connected with a notion of tents.

There is one passage giving a detailed description of the way in which the feast was celebrated, viz. Nehemia 8, 14—16: "And they found written in the law, . . . that. . . and that they should publish and proclaim in all their cities, and in Jerusalem, saying, Go forth unto the mount, and fetch olive branches and branches of the zes sjiemen, and myrtle branches and palm branches and branches of thick trees, to make booths, as it is written. So the people wenth forth, and brought them, and made themselves booths, every one upon the roof of his house, and in their courts and in the courts of the house of God, and in the place of the water gate, and in the place of the gate of Ephraim".

This passage contains two points of interest for our present purpose: it tells us what the tabernacles were made of and where they were erected. We shall consider them one after another.

The tabernacles which the book of Nehemia describes are real "Loofhutten, Laubhütten". The reference to Lev. 23, 40 however (this passage is certainly meant by "as it is written") is open to exegetical objections. For here it is only said that people must take the branches on the first day without any mention of their use. It may be supposed that this precept refers to rites such as the procession with lulab and etrog, the planting of willow-branches etc. This exegesis is recommended by the words "on the first day"; for it would be strange if the tabernacles should be erected on the first day of the feast. Consequently Lev. 23, 40 does not teach us anything concerning the form of the tabernacles in the author's time. Their first description occurs in Neh. 8, 14—16 and it informs us as to what kind of booths the post-exilic reformers had in view. This same type of booths, the real "loofhut", does not occur in Nehemia only : it is the type which the Karaites used1).

This is also the type which resembles the Egyptian tabernacles as described by W. B. Kristensen2).

The Rabbanitic Jews on the other hand did not limit the materials from which tabernacles should be made, to the species