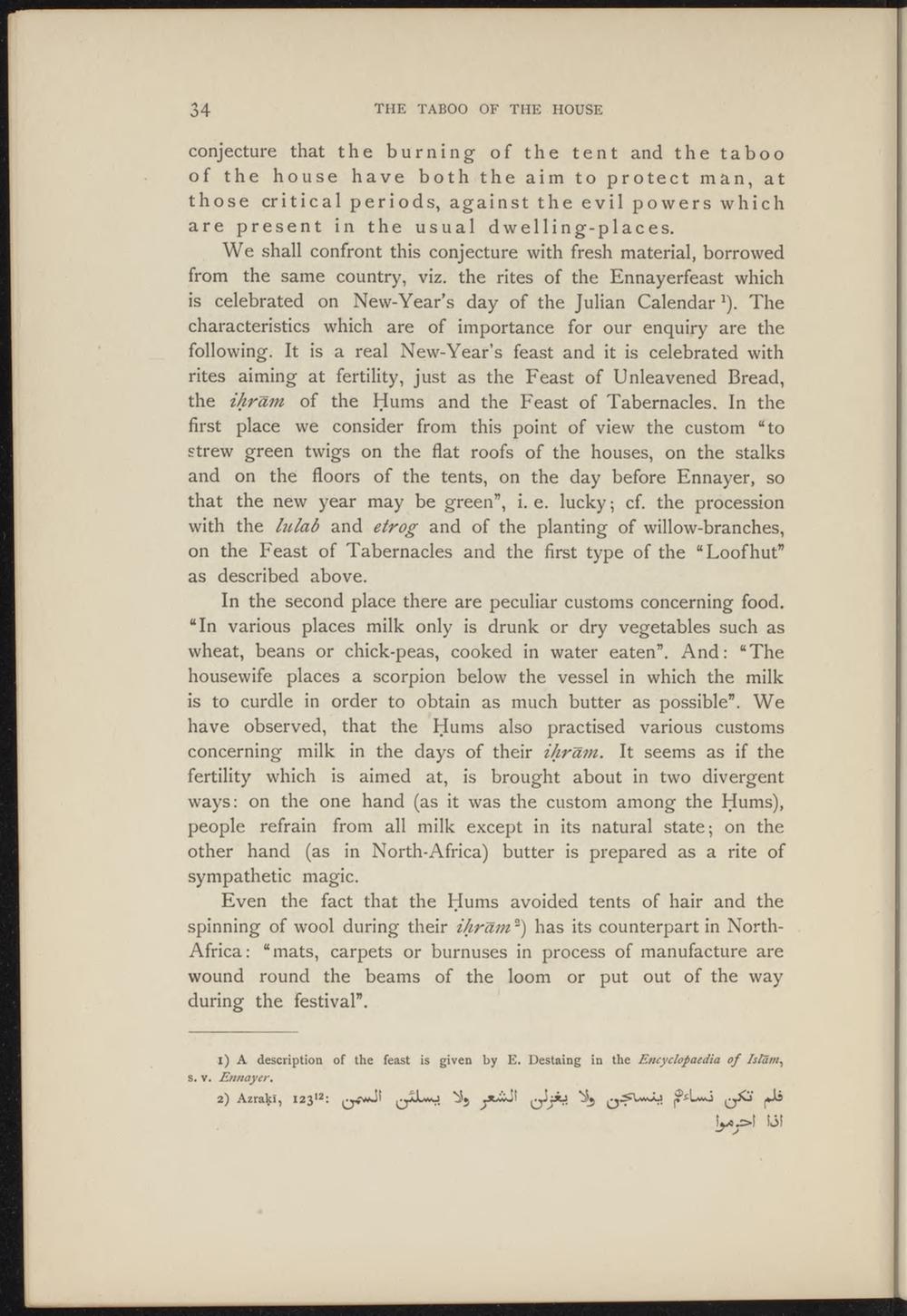 conjecture that the burning of the tent and the taboo of the house have both the aim to protect man, at those critical periods, against the evil powers which are present in the usual dwelling-places.

We shall confront this conjecture with fresh material, borrowed from the same country, viz. the rites of the Ennayerfeast which is celebrated on New-Year's day of the Julian Calendar1). The characteristics which are of importance for our enquiry are the following. It is a real New-Year's feast and it is celebrated with rites aiming at fertility, just as the Feast of Unleavened Bread, the ihram of the Hums and the Feast of Tabernacles. In the first place we consider from this point of view the custom "to strew green twigs on the flat roofs of the houses, on the stalks and on the floors of the tents, on the day before Ennayer, so that the new year may be green", i. e. lucky; cf. the procession with the lulab and etrog and of the planting of willow-branches, on the Feast of Tabernacles and the first type of the "Loofhut" as described above.

In the second place there are peculiar customs concerning food. "In various places milk only is drunk or dry vegetables such as wheat, beans or chick-peas, cooked in water eaten". And: "The housewife places a scorpion below the vessel in which the milk is to curdle in order to obtain as much butter as possible". We have observed, that the Hums also practised various customs concerning milk in the days of their ihram. It seems as if the fertility which is aimed at, is brought about in two divergent ways: on the one hand (as it was the custom among the Hums), people refrain from all milk except in its natural state; on the other hand (as in North-Africa) butter is prepared as a rite of sympathetic magie.

Even the fact that the Hums avoided tents of hair and the spinning of wool during their ihram3) has its counterpart in NorthAfrica: "mats, carpets or burnuses in process of manufacture are wound round the beams of the loom or put out of the way during the festival".

1) A description of the feast is given by E. Destaing in the Encyclopaedia of Islam, s. v. Ennayer.