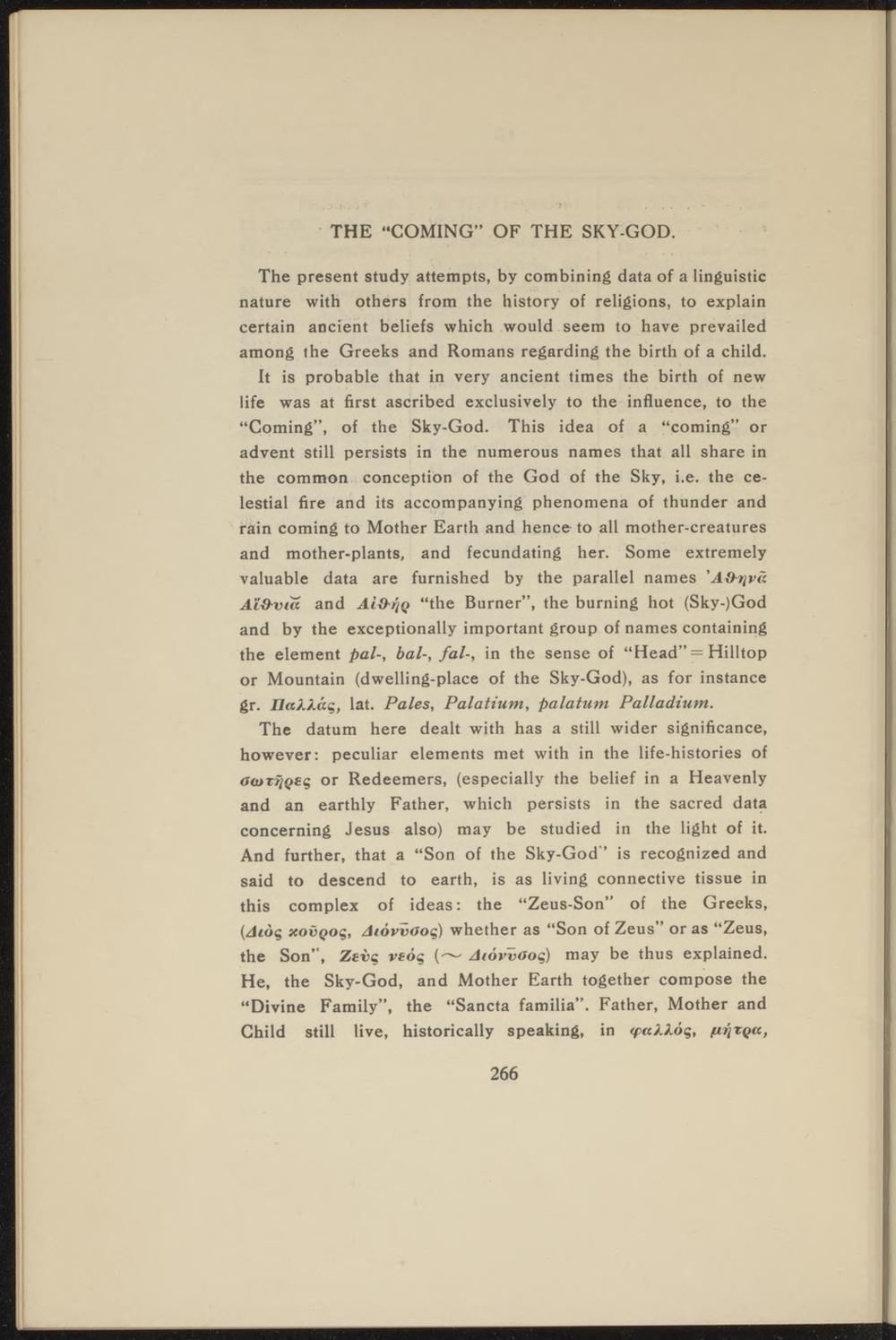 THE "COMING" OF THE SKY-GOD.

The present study attempts, by combining data of a linguistic nature with others from the history of religions, to explain certain ancient beliefs which would seem to have prevailed among the Greeks and Romans regarding the birth of a child.

It is probable that in very ancient times the birth of new life was at first ascribed exclusively to the influence, to the "Coming", of the Sky-God. This idea of a "coming" or advent still persists in the numerous names that all share in the common conception of the God of the Sky, i.e. the celestial fire and its accompanying phenomena of thunder and rain coming to Mother Earth and hence to all mother-creatures and mother-plants, and fecundating her. Some extremely valuable data are furnished by the parallel names 'AO-r/va Aï&via and AiO-rjQ "the Burner", the burning hot (Sky-)God and by the exceptionally important group of names containing the element pal-, bal-, fal-, in the sense of "Head" = Hilltop or Mountain (dwelling-place of the Sky-God), as for instance gr. Ila/J.aq, lat. Pales, Palatium, palatum Palladium.

The datum here dealt with has a still wider significance, however: peculiar elements met with in the life-histories of ötoT^pe? or Redeemers, (especially the belief in a Heavenly and an earthly Father, which persists in the sacred data concerning Jesus also) may be studied in the light of it. And further, that a "Son of the Sky-God" is recognized and said to descend to earth, is as living connective tissue in this complex of ideas: the "Zeus-Son" of the Greeks, (óiö$ xovqoi;, Jióvvaog) whether as "Son of Zeus" or as "Zeus, the Son', Zsv$ vtóq (•—' Aiówoo§) may be thus explained. He, the Sky-God, and Mother Earth together compose the "Divine Family", the "Sancta familia". Father, Mother and Child still live, historically speaking, in <pciXl.ói;, fit/rQa,