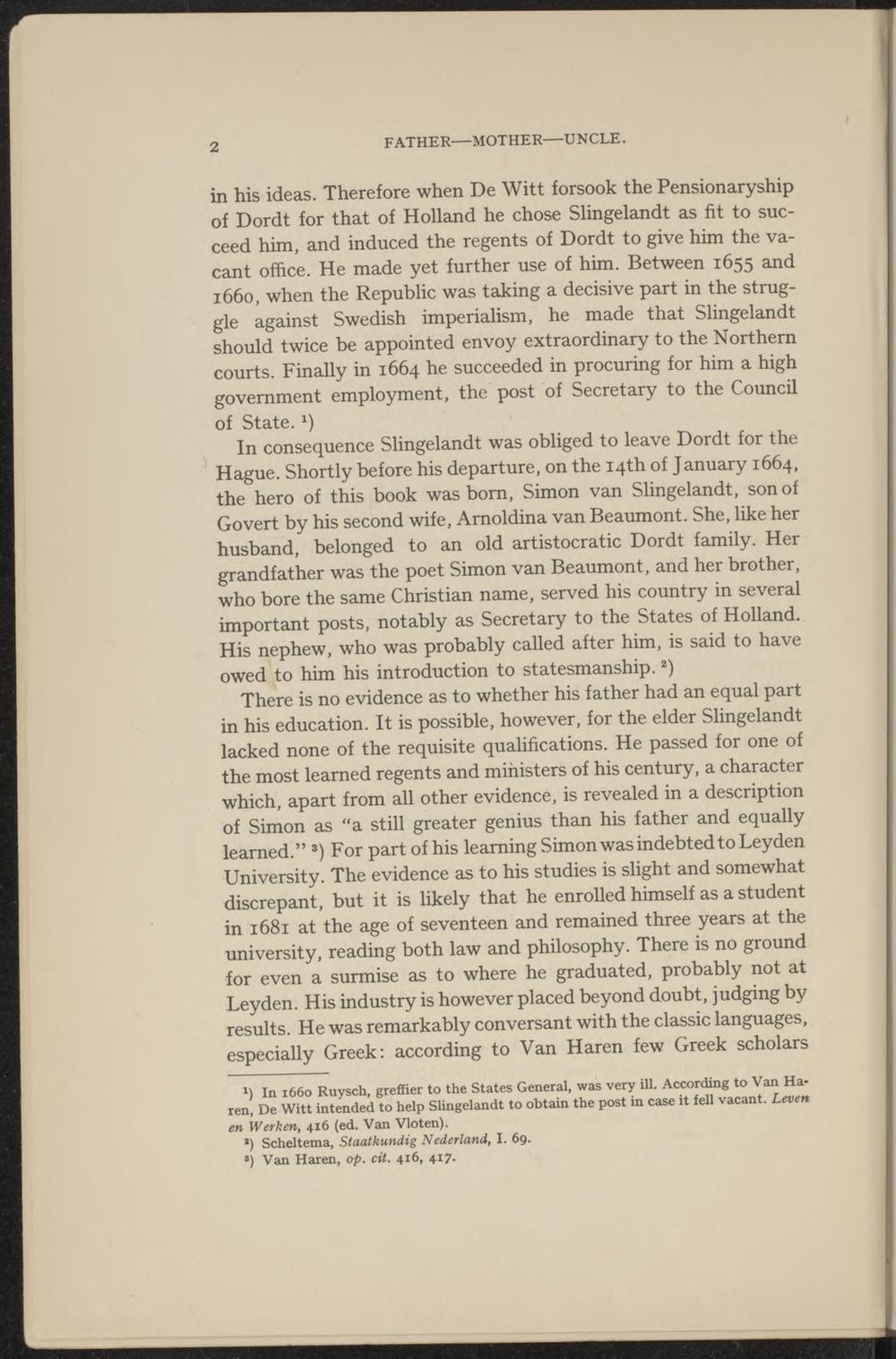 in his ideas. Therefore when De Witt forsook the Pensionaryship of Dordt for that of Holland he chose Slingelandt as fit to succeed him, and induced the regents of Dordt to give him the vacant office. He made yet further use of him. Between 1655 and 1660, when the Republic was taking a decisive part in the strug gle against Swedish imperialism, he made that Slingelandt should twice be appointed envoy extraordinary to the Northern courts. Finally in 1664 he succeeded in procuring for him a high government employment, the post of Secretary to the Council

In consequence Slingelandt was obliged to leave Dordt for the Hague. Shortly before his departure, on the I4th of January 1664, the hero of this book was born, Simon van Slingelandt, son of Govert by his second wife, Arnoldina van Beaumont. She, like her husband, belonged to an old artistocratic Dordt family. Her grandfather was the poet Simon van Beaumont, and her brother, who bore the same Christian name, served his country in several important posts, notably as Secretary to the States of Holland. His nephew, who was probably called after him, is said to have owed to him his introduction to statesmanship. )

There is no evidence as to whether his father had an equal pai t in his education. It is possible, however, for the elder Slingelandt lacked none of the requisite qualifications. He passed for one of the most learned regents and ministers of his century, a character which, apart from all other evidence, is revealed in a description of Simon as "a still greater genius than his father and equally learned." 3) For part of his learning Simon was indebtedto Leyden University. The evidence as to his studies is slight and somewhat discrepant, but it is likely that he enrolled himself as a student in 1681 at the age of seventeen and remained three years at the university, reading both law and philosophy. There is no ground for even a surmise as to where he graduated, probably not at Leyden. His industry is however placed beyond doubt, judging by results. He was remarkably conversant with the classic languages, especially Greek: according to Van Haren few Greek scholars

i) In 1660 Ruysch, greffier to the States General, was very ill. According to Van Haren, De Witt intended to help Slingelandt to obtain the post in case it feil vacant. Leven en Werken, 416 (ed. Van Vloten).