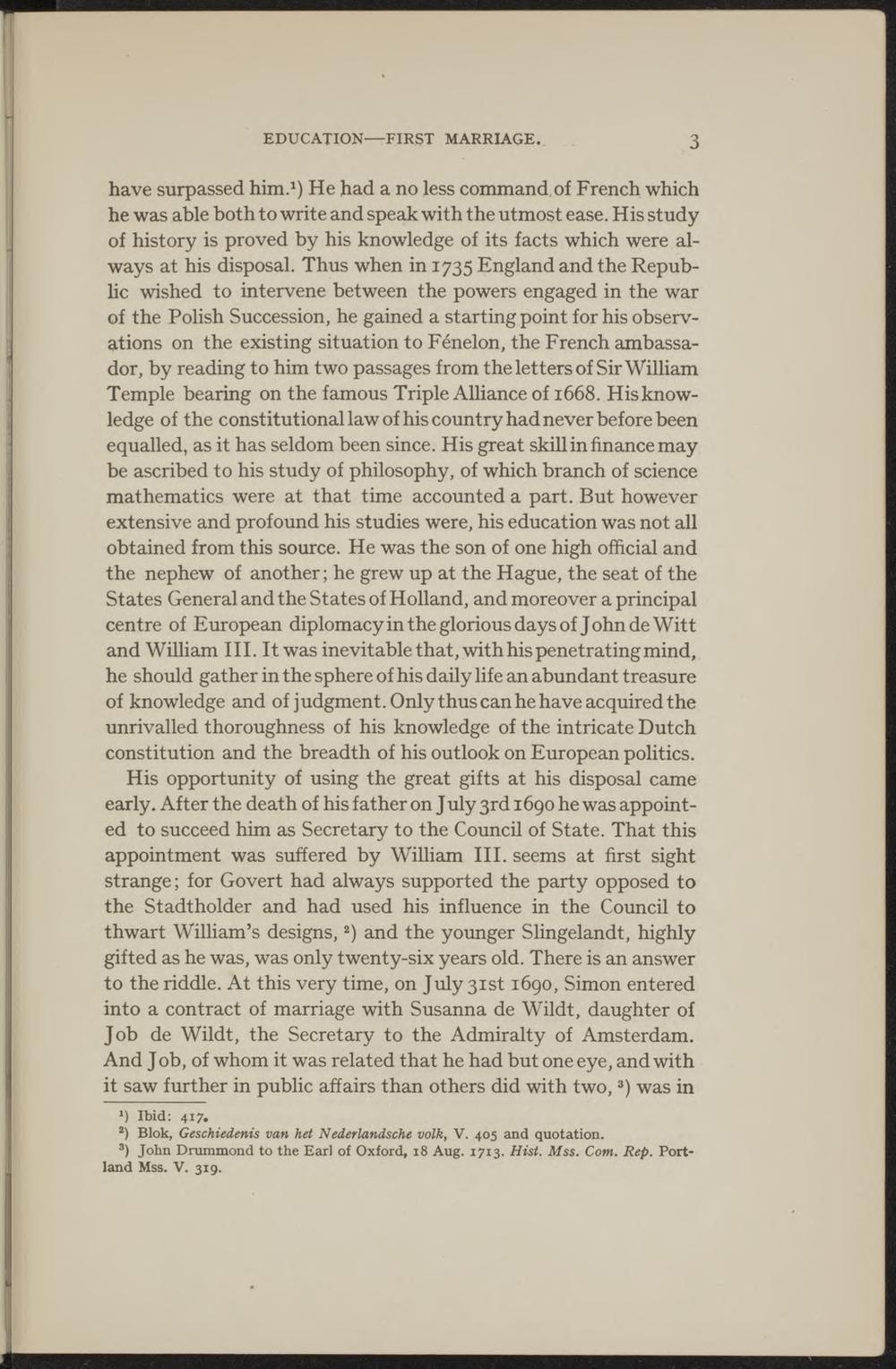 have surpassed him.1) He had a no less command of French which he was able both to write and speak with the utmost ease. His study of history is proved by his knowledge of its facts which were always at his disposal. Thus when in 1735 England and the Republic wished to intervene between the powers engaged in the war of the Polish Succession, he gained a starting point for his observations on the existing situation to Fénelon, the French ambassador, by reading to him two passages from the letters of SirWilliam Temple bearing on the famous Triple Alliance of 1668. Hisknowledge of the constitutional law of his country had never bef ore been equalled, as it has seldom been since. His great skillinfinancemay be ascribed to his study of philosophy, of which branch of science mathematics were at that time accounted a part. But however extensive and profound his studies were, his education was not all obtained from this source. He was the son of one high official and the nephew of another; he grew up at the Hague, the seat of the States General and the States of Holland, and moreover a principal centre of European diplomacyinthegloriousdaysof John de Witt and William III. It was inevitable that, with his penetratingmind, he should gather in the sphere of his daily life an abundant treasure of knowledge and of judgment. Only thuscanhehave acquiredthe unrivalled thoroughness of his knowledge of the intricate Dutch constitution and the breadth of his outlook on European politics.

His opportunity of using the great gifts at his disposal came early. Af ter the death of his father on J uly 3rd 1690 he was appointed to succeed him as Secretary to the Council of State. That this appointment was suffered by William III. seems at flrst sight strange; for Govert had always supported the party opposed to the Stadtholder and had used his influence in the Council to thwart William's designs,2) and the younger Slingelandt, highly gifted as he was, was only twenty-six years old. There is an answer to the riddle. At this very time, on July 3ist 1690, Simon entered into a contract of marriage with Susanna de Wildt, daughter of Job de Wildt, the Secretary to the Admiralty of Amsterdam. And J ob, of whom it was related that he had but one eye, and with it saw further in public affairs than others did with two,3) was in