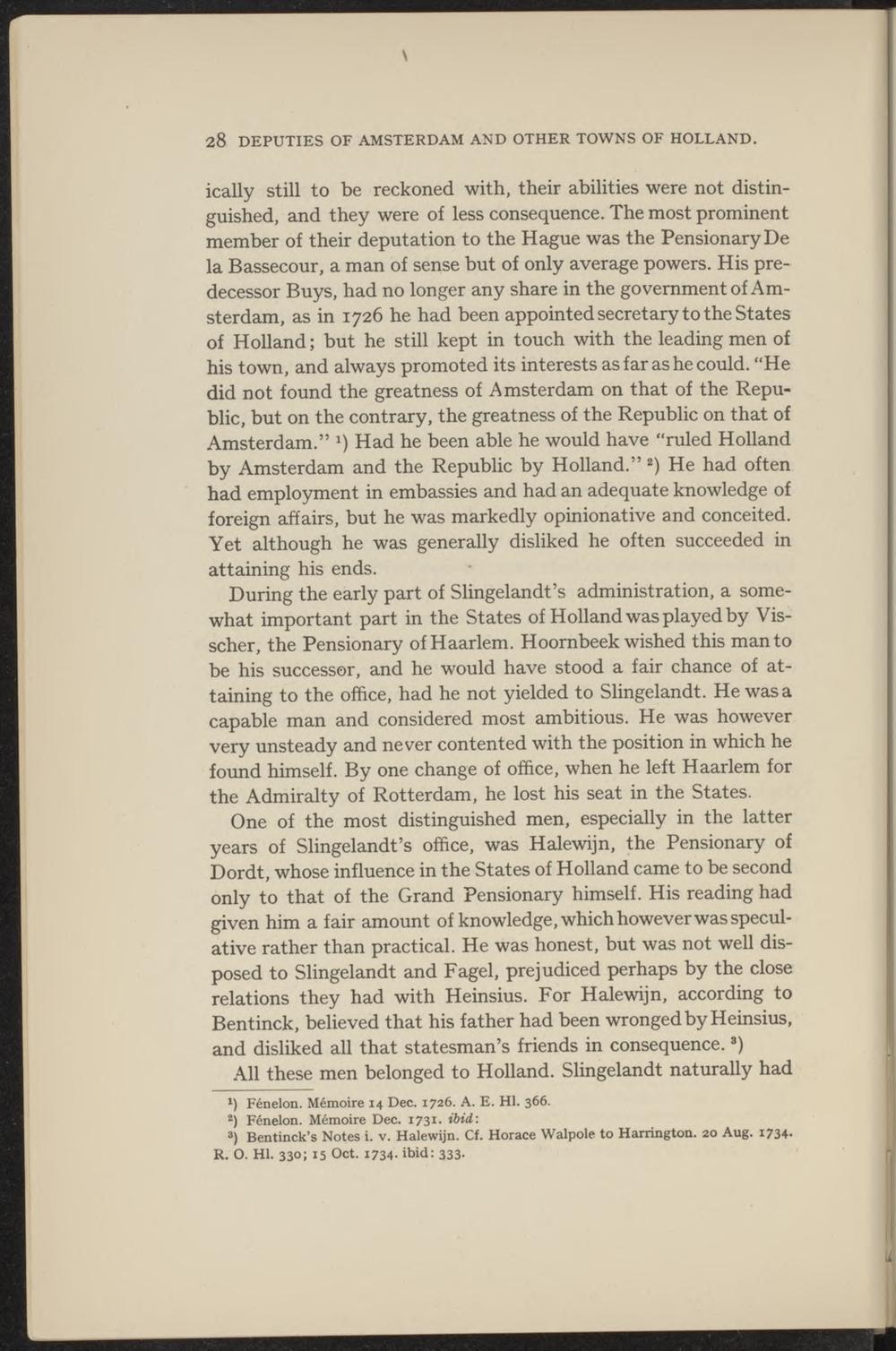 ically still to be reckoned with, their abilities were not distinguished, and they were of less consequence. The most prominent member of their deputation to the Hague was the PensionaryDe la Bassecour, a man of sense but of only average powers. His predecessor Buys, had no longer any share in the government of Amsterdam, as in 1726 he had been appointed secretary to the States of Holland; but he still kept in touch with the leading men of his town, and always promoted its interests asfar ashecould. "He did not found the greatness of Amsterdam on that of the Republic, but on the contrary, the greatness of the Republic on that of Amsterdam." 1) Had he been able he would have "ruled Holland by Amsterdam and the Republic by Holland." 2) He had often had employment in embassies and had an adequate knowledge of foreign affairs, but he was markedly opinionative and conceited. Yet although he was generally disliked he often succeeded in attaining his ends.

During the early part of Slingelandt's administration, a somewhat important part in the States of Holland was playedby Visscher, the Pensionary of Haarlem. Hoornbeek wished this manto be his successor, and he would have stood a fair chance of attaining to the office, had he not yielded to Slingelandt. He wasa capable man and considered most ambitious. He was however very unsteady and never contented with the position in which he found himself. By one change of office, when he left Haarlem for the Admiralty of Rotterdam, he lost his seat in the States.

One of the most distinguished men, especially in the latter years of Slingelandt's office, was Halewijn, the Pensionary of Dordt, whose influence in the States of Holland came to be second only to that of the Grand Pensionary himself. His reading had given him a fair amount of knowledge, which however was speculative rather than practical. He was honest, but was not well disposed to Slingelandt and Fagel, prejudiced perhaps by the close relations they had with Heinsius. For Halewijn, according to Bentinck, believed that his father had been wronged by Heinsius, and disliked all that statesman's friends in consequence.3)

All these men belonged to Holland. Slingelandt naturally had