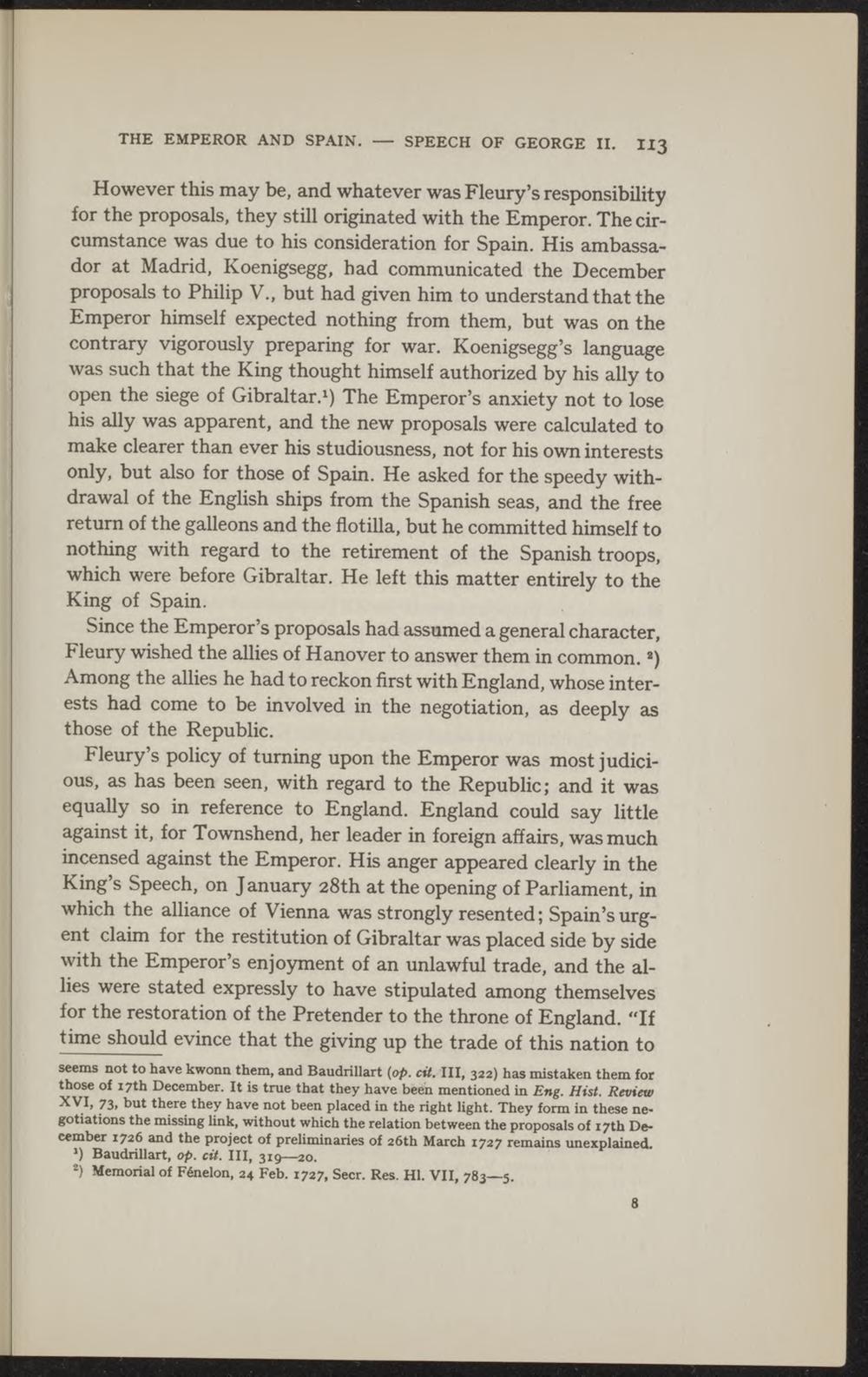 However this may be, and whatever was Fleury's responsibility for the proposals, they still originated with the Emperor. The circumstance was due to his consideration for Spain. His ambassador at Madrid, Koenigsegg, had communicated the December proposals to Philip V., but had given him to understand that the Emperor himself expected nothing from them, but was on the contrary vigorously preparing for war. Koenigsegg's language was such that the King thought himself authorized by his ally to open the siege of Gibraltar.1) The Emperor's anxiety not to lose his ally was apparent, and the new proposals were calculated to make clearer than ever his studiousness, not for his own interests only, but also for those of Spain. He asked for the speedy withdrawal of the English ships from the Spanish seas, and the free return of the galleons and the flotilla, but he committed himself to nothing with regard to the retirement of the Spanish troops, which were before Gibraltar. He left this matter entirely to the King of Spain.

Since the Emperor's proposals had assumed a general character, Fleury wished the allies of Hanover to answer them in common.s) Among the allies he had to reckon first with England, whose interests had come to be involved in the negotiation, as deeply as those of the Republic.

Fleury's policy of turning upon the Emperor was most judicious, as has been seen, with regard to the Republic; and it was equally so in reference to England. England could say little against it, for Townshend, her leader in foreign affairs, wasmuch incensed against the Emperor. His anger appeared clearly in the King's Speech, on January 28th at the opening of Parliament, in which the alliance of Vienna was strongly resented; Spain's urgent claim for the restitution of Gibraltar was placed side by side with the Emperor's enjoyment of an unlawful trade, and the allies were stated expressly to have stipulated among themselves for the restoration of the Pretender to the throne of England. "If time should evince that the giving up the trade of this nation to

seems not to have kwonn them, and Baudrillart (op. cit. III, 322) has mistaken them for those of i7th December. It is true that they have been mentioned in Eng. Hist. Revtew XVI, 73, but there they have not been placed in the right light. They form in these negotiations the missing link, without which the relation between the proposals of I7th December 1726 and the project of preliminaries of 2öth March 1727 remains unexplained. ') Baudrillart, op. cit. III, 319—zo.