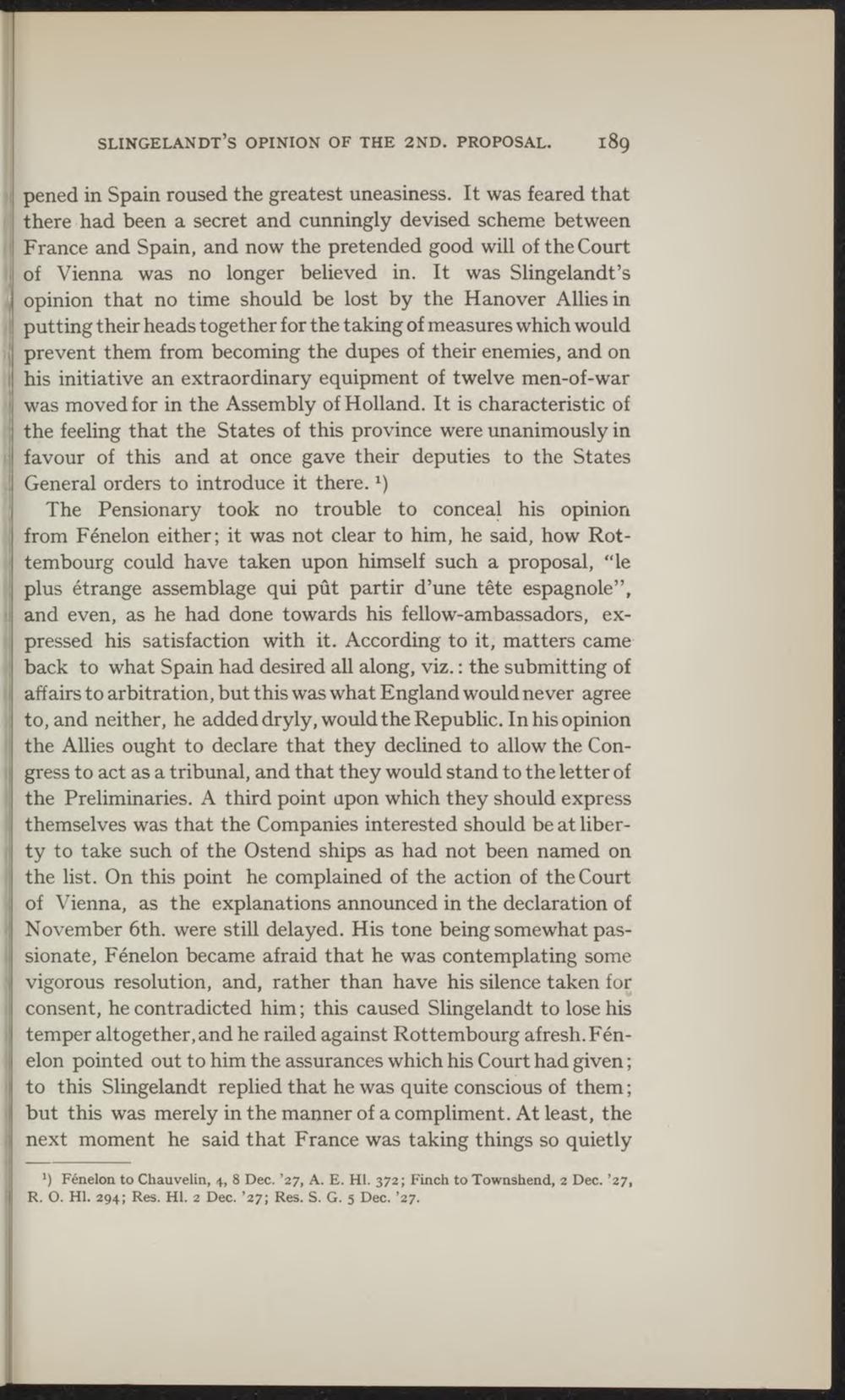 pened in Spain roused the greatest uneasiness. It was feared that

France and Spain, and now the pretended good will of theCourt : of Vienna was no longer believed in. It was Slingelandt's j opinion that no time should be lost by the Hanover Alliesin putting their heads together f or the taking of measures which would j prevent them from becoming the dupes of their enemies, and on I his initiative an extraordinary equipment of twelve men-of-war

was movedfor in the Assembly of Holland. It is characteristic of the feeling that the States of this province were unanimously in

: favour of this and at once gave their deputies to the States General orders to introducé it there.x)

The Pensionary took no trouble to conceal his opinion from Fénelon either; it was not clear to him, he said, how Rottembourg could have taken upon himself such a proposal, "le plus étrange assemblage qui püt partir d'une tête espagnole", and even, as he had done towards his fellow-ambassadors, expressed his satisfaction with it. According to it, matters came back to what Spain had desired all along, viz.: the submitting of aff airs to arbitration, but this was what England would never agree to, and neither, he addeddryly, would the Republic. In his opinion the Allies ought to declare that they declined to allow the Congress to act as a tribunal, and that they would stand to the letter of the Preliminaries. A third point upon which they should express themselves was that the Companies interested should be at liberty to take such of the Ostend ships as had not been named on the list. On this point he complained of the action of theCourt of Vienna, as the explanations announced in the declaration of November 6th. were still delayed. His tone being somewhat passionate, Fénelon became afraid that he was contemplating some vigorous resolution, and, rather than have his silence taken for 1 consent, he contradicted him; this caused Slingelandt to lose his ! temper altogether, and he railed against Rottembourg afresh. Fénelon pointed out to him the assurances which his Court had given; to this Slingelandt replied that he was quite conscious of them; but this was merely in the manner of a compliment. At least, the I next moment he said that France was taking things so quietly